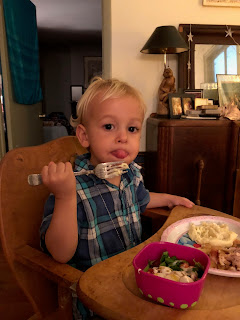 I have to say that August's first sleepover went swimmingly. It was rather remarkable in that he did not once ask for his parents nor was he fussy at all but instead was agreeable and apparently happy to be exactly where he was, doing exactly what he was doing.

There he is eating his mushed potatoes. While we were eating our supper we got a drop-by visit from Lon and Lis who had attended a funeral in Tallahassee. They couldn't spend the night but we were so glad to have them for the tiny little time they could hang out. August is always very gregarious around them and was so again last night. He busted into "Bah-Bah Black Sheep" for Lis and she was most impressed. He spontaneously sings this song quite frequently and usually at the top of his lungs. Our favorite part is when he sings about the "the little boy who lives in the drain." Maggie can sing this song too and I would pay a hundred dollars to get them to sing it together.

Because this was his first overnight and it was important to start a ritual and have a treat, I made him a very small version of the purple cow that Owen and Gibson love so much with a tiny bit of strawberry sorbetto (what the fuck is that?) and some grape juice. He was as happy as he could be and finished it up with a straw to get every drop.

After Lon and Lis left, he agreed to a bath and we cleaned out the bathtub from the construction debris and threw the ducks and octopi in there and ran some nice warm water.
He loved it! 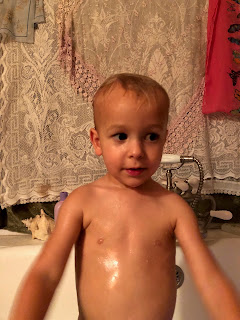 Then it was time to pop him into pajamas, help him brush his teeth, 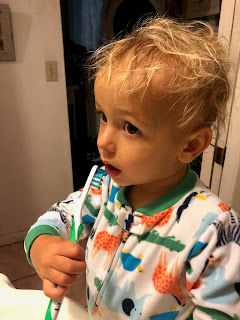 and read him some books. After three books, I told him it was time to go to bed and we searched the house for just the right bears and monkeys and so forth with which to sleep. I put him into his bed and pulled up the cover and he asked for another cover and so I got him one and I told him I loved him and that...was...that.

I slept in the same room so that I would be sure to hear him if he woke up and he did around three. He cried and I picked him up out of bed and said, "Don't cry, my love. You can sleep with Mer."
"No sleep!" he wailed.
"But it's night, my darling," I told him. "Time to sleep."
"No night, no night," he cried.
I held him and rubbed his back and then he said, "I hurting," and he stuck his leg up in the air like a ballet dancer.
"Do you want me to rub your leg?" I asked him.
"Yes," he said, and I did. He quieted and then I asked him if he wanted me to rub the other leg and he said yes to that too.
And then he fell back asleep.

I, however, could not fall back asleep because Maurice, who had taken the opportunity of me being alone in a bed to come and sleep with me, got antsy when August appeared in the bed too. I reached down where she was and patted her and damn if she didn't go full-on Maurice and bite and claw my wrist which then began to itch and swell. I finally had to get up and put some Benadryl cream on it and I don't even know when I went back to sleep but when August woke up again around quarter to eight and announced with great joy, "It DAY!" I took him to his grandfather who was slumbering peacefully and blissfully alone in our bed but who woke up and agreed to take over.
And then I went back to bed and slept for two more hours!

When I got up, there had already been cereal and pistachio snacking but I was still committed to making bacon and pancakes. After breakfast and some playing, I asked him if he wanted to walk to the post office. He assured me that he did and I said, "Well, let's get our shoes on," and he threw his arms up in the air and shouted, "Let's do it!"
So we did. 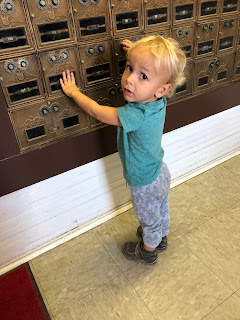 He helped his Boppy in my bathroom for a little while when we got back. 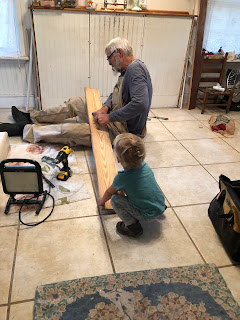 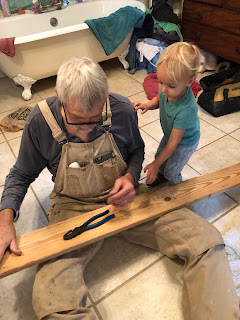 I think we can safely say that August is old enough to spend the night away from home.
Or maybe a week or two.

Jessie and Vergil went out to supper with Levon and also to breakfast this morning! Jessie reports that they had an entire conversation! She sent this picture. 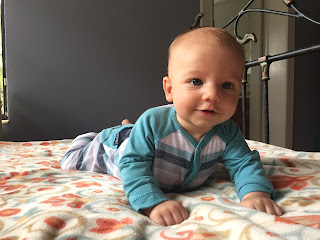 She said that he seemed to enjoy having some time alone with Mom and Dad.
Doesn't he just look like a BOY all of a sudden?
Lord, it won't be ten minutes until he's spending the night.

Well, here's a video to commemorate August's first night away from home. It's sort of an interview/ wrap-up/summary of events.


Our big little boy. He's pretty good and he sure is loved.