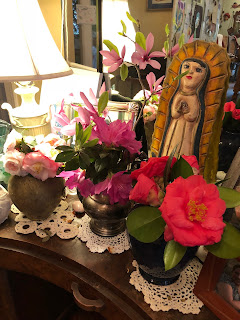 Well, there you see the convergence of late winter and early spring. You got your camellias, your Japanese magnolias and your azaleas. It is all a bit lurid but I love it. 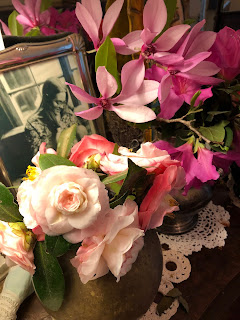 Aren't they all just so beautiful in their own ways and colors and designs and shapes and forms?

It's been a bit of a strange day. Mr. Moon worked on bathrooms all day long and he almost has mine finished. Just a bit of drain work which is going to require yet another trip to Lowe's or Home Depot, of course, and then I can start moving back in there. Before I do that, though, I absolutely HAVE to do some cleaning and get rid of a bunch of crap which has been cluttering up my life for years because that sink in the newly refinished vanity is too gorgeous for me to disrespect with crap and untidiness and pure dirt.
This is what the windows over my bathtub look like. 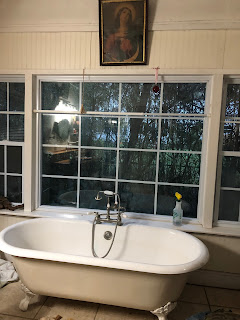 I am not sure at all what the former owners were thinking when they built this bathroom because if you don't cover at least the bottom three-quarters of those windows, the entire village of Lloyd and anyone else who happens to get lost off the interstate and drives past will be able to see you at your most naked and vulnerable to say the least.
Ain't no one wants to see that.
So today I cleaned those windows and the sills and also the two windows which face out towards the road AND the Venetian blinds in them and I swear- before I ever clean Venetian blinds again I'll just go out and buy new ones. That shit is stupid. Especially here in Lloyd where the dirt is black as a demon's heart and plentiful to boot. I almost cried.
So for fourteen years I've just had various pieces of cloth and lace thrown up in the windows you see above and I'm over it. I am going to make some curtains and I am thinking something which would fit with the sink in some way, perhaps brightly colored roses in the Mexican fashion? I spent a good while online today searching for just such fabric but had no luck. I'm not sure what I want but I think I'll know when I see it.

I am nowhere near finished cleaning the bathroom. The floor alone is going to require shovels and pails due to the fact that it's been a construction zone for a few weeks. But eventually, it will be gorgeous I do believe.

Here's what Mr. Moon's bathroom looks like at the moment. 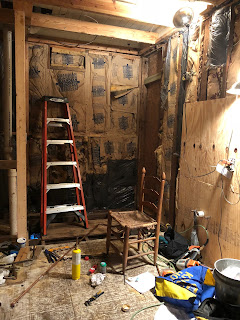 Although it does not look so very impressive, you cannot believe the amount of work it represents. My husband works on this stuff in his sleep. Last night he got out of bed and headed towards that bathroom and I said, "Where are you going, honey?" and he muttered something about a drain or glue or something and went and took care of some bit of carpentry he'd been fretting over all night long.
As you can see, I am a bit vague about this stuff.
Good thing he is not.

So. I cleaned. I picked some flowers. I took the trash. I started weeding and then it began to rain. I got absolutely nothing finished but at least those beastly filthy windows are clean(er).
And when I went to the trash place, the guy who works there saw the apron I was wearing (what? you don't wear an apron when you take your trash to the trash place?) and proceeded to tell me about his grandmother who wore an apron from the moment she got up to the moment she went to bed. When he finally asked her why one day, she told him that she kept her "peacemaker" in her double-reinforced apron pocket. Which was a Smith and Wesson pistol. I think that's what he said.
He is still chuckling over that and his grandma must have died at least fifty years ago, judging by his age. He also told me that his grandma and some other old lady down the street used to have the kids throw tin cans in the air and they'd shoot them. The cans, not the kids.
Judged by today's light, this is not that funny but I'm sure it was pretty entertaining back then.
And not only is this guy still laughing, he's still amazed at the sharpshooting abilities of those two old ladies.

That was Sunday and tomorrow will be Monday and I'll be driving over to Jacksonville with Owen and Jason for a follow-up appointment. We shall stop at the Busy Bee in Live Oak where we will use their sparkling chandelier-lit bathrooms and Owen will try and get me to buy him stuff.
Which I probably will. 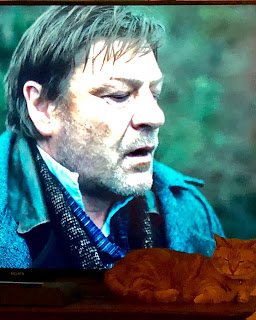 We have been watching the Frankenstein Chronicles which is weird and eerie and dark and sort of really gross. Yet somehow enjoyable. And last night Maurice came in and curled up on the little space in front of the screen and the contrast between sleepy domestic cat and hallucinating, syphilitic detective was just too good. Plus, it would appear that Sean Bean is staring directly at my cat.

Wish me luck in getting up before the crack of dawn. I am so spoiled and I know it.