First of all, let me say that I have not been doing so great on responding to comments but I am going to do better. I swear. You have no idea how much I love comments. They warm me like hot-buttered scones with honey dripping off of them.
So yeah, I promise.

Secondly, let me say thank-you, Jack!
I wasn't feeling so great this morning, even wondering if I was coming down with the flu or had Flu Lite or something but I figured that I could definitely do something about the bathroom where Jack shredded the curtain. This would involve taking down the old curtain which was no big deal due to the fact that, like I said, was only thumbtacked up there in the first place.
So I did that.
Then I took down the BLACK MINI BLINDS that have been there since we moved in and which we have never once used. I mean, the window in that bathroom does offer a very fine view from where people walk to enter the house but I just used that thumbtacked up old piece of bark cloth.
This all led to the removal of many, many generations of spider webs. I should be ashamed to admit this but fuck it- whatever was behind that bark cloth just got ignored.
So I cleaned the window and scrubbed the mildew and spider webs and black Lloyd dirt and cleaned the panes themselves and then I started going through my fabric to see what I could find to make a new curtain. I found a piece of lovely blue eyelet that I thought I'd use and then I stumbled upon a set of lace valances which I have no memory of buying.
Hmmmm...
I thought.
Well, that could work.
But before I got out my trusty Singer, I opened up the cabinet where I keep tablecloths and found a small, beautiful one made of butter yellow linen with lace in the center and at the corners (again- having no memory of where or when I got it) and my heart jumped a little.
Now this- this could work.
The yellow tablecloth was not quite large enough to fill the space I wanted filled so I found another linen tablecloth, this one white, and sewed the yellow one to that, making a deep bottom hem and a top hem to put the curtain rod through.
It was so easy, so quick, and it's so imperfect, but I am so thrilled with what it looks like now. 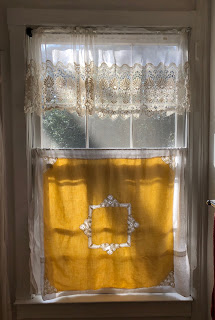 Honestly, it was just fun and the best part was that I used some of my thrift treasures that I buy for no reason other than that they are lovely or made of good materials or have handwork on them or...
Well. You know.
And then I stash them away and never use them but today I did use some and now that bathroom is light and airy. 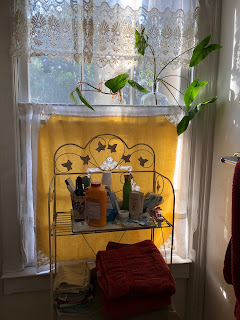 And that's what I did today. Something that I have thought about doing for so long now and which I probably never would have gotten around to if Jack hadn't gotten in his claws in that curtain.

Cautionary note: When you have a very old piece of bark cloth and it's been hanging in a window for fourteen years and you take it down and decide to wash it because hell, maybe you could make a pillow or something out of it, that might be a very bad idea because your washing machine may end up looking like a large animal ate the bark cloth and partially digested it and then vomited it up.

Maybe. It could happen.
Let's just say that there will be no bark cloth pillows happening around here any time soon.