Another Sunday, Another Batch Of Pancakes

Well, here it is, February 11, 2018 and it is raining nicely in Lloyd, I'm wearing short sleeves, the frogs are singing their shrill song and two mosquitoes are pestering the crap out of me. Big, fat, juicy mosquitoes.
A dozen would make a meal for a frog the size of a cat.

The Weatherfords came out this morning for pancakes and it was mighty good to see Vergil's mama. She was interested in the bathroom rebuild because she built her own house with her own hands (and a little help, I guess) and tools both power and non-. In other words, the woman knows what carpentry and design and plumbing and electricity are all about.
I joke about being Martha Stewart but Vergil's mother is better than Martha Stewart and is a musician and an artist too. Her garden is a thing of beauty and she knows how to take care of an apple orchard and goats and chickens and she once rode her bicycle all the way across the United States of America.
Despite all of that, she is down-home and friendly, sweet and funny.
Thank god, right?
She's a love and I call her my sister-grandma.
I do believe that August and Levon have been basking in the extra love. Of course as soon as August got here he had to immediately go and start playing with all of the things that he plays with here. There are rituals to be observed, the pianos to be played- both the large, regular one and the small, toy one- certain toys to be taken out and enjoyed, and of course, books that must be read.
The best thing was watching the child eat three pancakes with such gusto as to be almost alarming. Where did he put them in that tiny tummy? My pancakes are not for the faint of appetite. These had oat bran, apples, bananas, blueberries and pecans in them. But he tucked away those three before his daddy had even eaten HIS first three.
And some bacon.
Levon is really starting to look at food with great interest. I held him on my lap for awhile as we ate and he could not take his eyes off my plate. I found that with my own babies, some were extremely eager to taste real food and some just weren't that interested. May was the child who was most determined to see what food was all about and her first bite of solid food was actually a tiny piece of smoked mullet that she snatched from me as it was on its way up to my lips.
She loved it and it did her no harm.
But Levon has a few more months to go before he gets to start eating. I told him today as he was obviously lusting after pancakes and bacon that he could not eat yet because he has no teeth.
"I have teeth!" said August, forking up another bite of pancake.
"Yes, yes you do," I told him.
"Mer have teeth?" he asked.
"Oh yes," I said. "Mer has teeth."

And besides cooking breakfast, I really haven't done a damn thing today. Okay, I ironed shirts until I ran out of new episodes of Grace and Frankie to watch. Mr. Moon asked me how I liked the new ironing board cover.
"Not as exciting as I thought it would be," I told him.
Sigh.
No wonder they're constantly making cleaning products NEW AND IMPROVED WITH RAIN SCENT AROMATHERAPY! I mean, housework is not that thrilling and it's no wonder that fifty's and sixty's housewives got into some pretty strange territory with their cooking, especially for entertaining. I mean- hey! Those women were smart and educated, suddenly had washing machines that wouldn't take an arm or breast off in the wringer, didn't have to weave their own cloth or preserve their own garden grown produce. They got bored! And they had women's magazines which told them that things like creating a Frankfurter crown roast 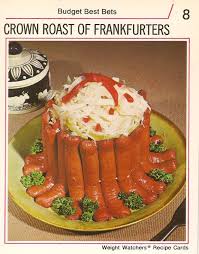 or a party potato salad 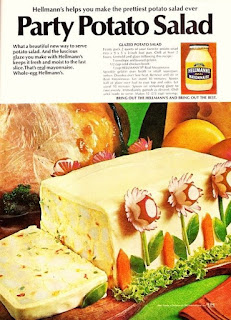 could, temporarily at least, distract them from their daily routine.
Give a little meaning to their lives.

Good Lord. What am I talking about?

So. Did any of y'all read this article in the New Yorker?

I read it last night and have so many conflicting thoughts about it that I don't even know where to start. I'd love to hear what others may think of it.

And here's something you can laugh at- I just discovered today that unless Lucy is coming back from the dead to lay eggs, the eggs I thought she was laying are actually being laid by Miss Camellia who in hen years is probably about seventy-four.
Although this makes me feel stupid and it also makes me wonder where in the world Lucy was laying her eggs if indeed, she was laying eggs, it also makes me feel better about all of the cat food and treats I give Camellia when she comes up onto the porch and pecks at me until I get up and give her something.

That is absolutely all I have to say tonight but if you have anything you feel that you need to offer, I'll be glad to hear it.