Woke up this morning to the news that Miss Lucy had been murdered and half eaten in the hen house last night by an unidentified animal. I know that she was fine when I shut them up last night- I have so few hens now that I identify each one with the flashlight before I wish them good-night and shut the door. Mr. Moon searched high and low to see how the killer could have gained access to the coop or henhouse and he could not.
I just hate that. You try as hard as you can and you still can't prevent every death of your chickens. She was the last of the Ameraucanas I bought in Crawfordville last year and she was my green-egg laying girl.
You know- sometimes all you can do is say Fuck, Fuck, Fuck, and move on.
Soon the Tractor Supply will be getting chicks and everyone else that sells them, too, and I suppose I'll raise a new batch of biddies. I'm not sure where. What we had been using as a nursery, which was Mr. Moon's bathtub, has been ripped out of the wall and taken to the dump and so I shall have to figure out another arrangement. That bathroom was such a good place. It had running water right there and plenty of room to keep the chick starter and chick probiotics and chick electrolytes and we could wrap the warming light's cord around the soap dish handle for perfect placement and now I'll have to figure it all out somewhere else.
My own bathroom is still in a state of disrepair as well. Mr. Moon wants to do some work on the vanity that the sink is in before he puts that all back together and I think it's going to take awhile. He dried out the insulation behind the sink with a fan for the past 24 or so hours but there's going to be some carpentry AND plumbing involved.
Many years ago, Mr. Moon bought me a Talavera sink that looked sort of like this: 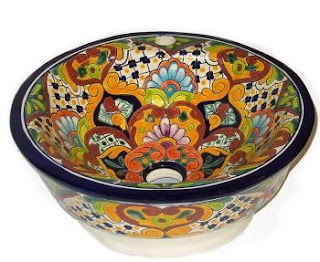 We had planned to put it in the house in Apalachicola but he decided to surprise me and put it in my bathroom when he fixed it all up. He went in search of it, feeling certain that he'd seen it lately...somewhere.
But he could not find it.
He finally asked me if I knew where it was. Now the funny thing is, I, too, feel as if I've seen it somewhere. It's in a box. But damn if I can remember. And I've searched high and low in all of the places I think it could be and I cannot find it either.
This rather pisses me off because it is such a beautiful sink and oh! how I'd love to start using it right away. I've even silently said the St. Anthony prayer twice. Do you know it?
"St. Anthony, St. Anthony, please come down.
There is something that's lost and must be found."
Hey! Sometimes it works!
So far, not this time.
Perhaps St. Anthony is too busy looking for our sanity, peace of mind, compassion, understanding, and acceptance to be bothered helping me look for a bathroom sink, even if it is an exceptionally beautiful sink.

Well, maybe it will turn up.

After I did all of my searching, I went out and weeded the collard greens and then I decided to trim up the Canary Island date palms, aka, kill-you-with-its-needles-palms. GOD! WHY did I ever plant those motherfuckers? No matter how careful you are, you are going to get stabbed at least once and they seem to have some sort of toxin in them and it's just a horrible proposition but I lived. The best think I can say about them is that after trimming them, trimming the Sago palms is a delightful treat, even though those fuckers will stab you too. So I did. I trimmed the Sago palms which I am sure I point out every year are not really palms at all but an otherwise ancient plant. Like the Spanish bayonet plant, they are excellent choices to cultivate under a window which thieves and criminals might want to use to break into your house!
Just pointing out helpful landscaping and safety tips.

After I did that, I decided to trim a rose bush.
Do we detect a trend here?
I managed to cut back the rose without any injury except for the one I got kneeling on what I assume is some fort of Satan-inspired nettle that grows in my yard and even through my overalls, it stung my knee and now, hours and hours after the fact, is still causing my knee to be swollen with a pins-and-needles buzzing going on in it which feels as if aliens are trying to contact me with some sort of code which I can't begin to understand. That is not too unpleasant, actually. Not like the initial itching and stinging which makes your entire body crawl with goosebumpy chills and makes YOU say things like, "Cocksucking motherfucker!"
Etc.
Still, I got a lot of the sharp things trimmed and I am glad for that. The burn pile is growing to mountain-like proportions.

Okay. Change of subject.
I know I've discussed this before but don't you love it when you read a recipe online and the comments are all like, "I tried this recipe but instead of corn meal I used flax seeds and instead of cheese I used ground walnuts and I substituted a Monster Energy drink for the buttermilk and instead of cooking it at 350 degrees for twenty minutes I cooked it at 450 degrees for ten minutes and it sucked and I would not recommend this recipe"?
I always crack up when I read these things.
So anyway, last night I decided to cook this soup. 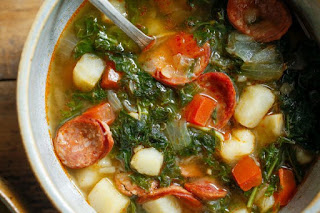 It is a kale soup with sausage and potatoes and the recipe can be found HERE.
Now as funny as I find those comments about not following the recipe and ending up with something mostly inedible, I tend to view recipes as basic suggestions unless it's something entirely new and very different than what I am used to cooking.
And so, instead of the type of sausage they recommended I used venison sausage. Instead of chopped plum tomatoes, I used canned diced tomatoes because I didn't have plum tomatoes. Also, I used kale and collards for the greens instead of just kale.
Otherwise, I mostly stuck to the recipe and it was awesome and super easy to make.
I DO recommend it.
I accompanied it with a sort of primitive focaccia bread that I baked which I served with goat cheese and it was such a good supper, we're having it again tonight.
I am a bit inappropriately excited about that.

Dang I wish I didn't love to eat so much. But I do.

Speaking of, Vergil's mama is in town for a visit and the plan is for them to all come over for pancakes in the morning.
Are you surprised?

One more thing- here is the Trillium in my yard. 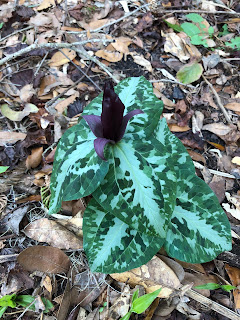 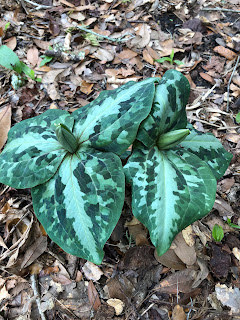 Just about to bloom.

Spring is definitely on its way and I have mixed feelings about that. The thought of the coming heat fills me with dread. I am getting old, I guess. But it is always such a beautiful thing to watch the plants in my yard swell with their knobby-knuckled buds and sometimes, like the Trillium, just appearing suddenly as if by the magical impulse of the goddesses of green.

And on we go. Lend a thought to dear Lucy who provided us with such huge, beautifully colored eggs. We will certainly miss her.
Rest in peace, sweet hen.