Cat Worming And Other Topics 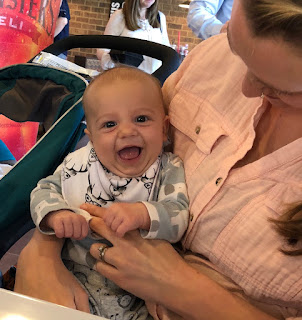 My day started out with trying to get some worm-medicine-laced stinky cat food down Jack's throat. Not what I would have chosen and it's a long story as to why my day started out with that but let's just leave it at the fact that it did and move on except to say that I did get most of the goop down him and also, that I now need to replace the curtain in the kitchen bathroom.
I needed to replace it anyway because it's naught but a piece of vintage cloth that I thumbtacked up there almost fourteen years ago as a temporary solution so the cat really did me a favor when he slashed it like Sylvester the Cat on a Tweety Bird rage.

But you know- that's nothing, not even a problem by First World definition and the day got a lot better when Jessie and her boys and I went to TJ Maxx and then to lunch and then to Trader Joe's. I bought a new ironing board cover at TJ Maxx which sort of thrills me. August helped me pick it out. He has subdued taste.
Unlike me. Jessie found a huge Virgin of Guadalupe charm in the sale portion of the jewelry display and she bought it for me because I love it so much. It's backed and surrounded with actual silver and only cost twelve bucks which was only two more dollars than the ironing board cover! 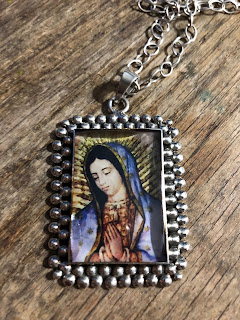 I feel like the Pope. Or perhaps the Popeacita.

I mostly had fun chatting with August as we shopped. Jessie needed some picture frames but of course we had to go down all of the aisles to check out the goods. As much as I am determined to avoid buying useless dust catchers, I am sort of tempted to buy everything in that store but I restrain myself. I remember when Lily and Jason and the kids and I all stayed at an Air BnB in Jacksonville last year and the place looked like a TJ Maxx had exploded in it.
One can go too far even if taste and irony are involved.
I bought August two books because he was a good boy and I also got Levon a new toy because he was a good boy, too.
Then we went to lunch and that's where I took that picture up at the top of Mr. Grin. Look at that happy boy! 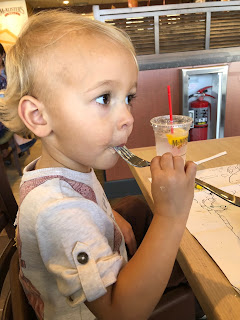 Jessie told me that the other day August had said that Mer was "sweet and kind." And then added, "But not Maggie." Haha! Actually, Maggie is sweet and kind but she does want to kiss a lot which is rather off-putting for August.

And then we went to Trader Joe's where I got a huge and immense sugar jones because of all the "healthy" (right) candy there but I didn't buy any. I got some extremely grain and seed laden crackers and some sundried tomatoes and something else but I can't remember what.

Got home to discover that there was a huge obvious leak in my bathroom. The rugs were soaked and it was pouring out water on the outside. I called Mr. Moon and he told me how to turn the water off at the street which I did and then he came home and figured it out. 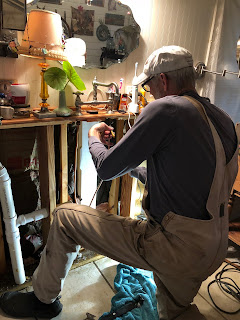 It's not all put back together yet but the leak has been fixed and the water is back on and the rugs are in the washing machine. He is such a handy man. What in the world do people do who do not have a Mr. Moon?
I have no idea but I do and I am so grateful.

And Hank gave a speech at a convention in Orlando today about Queer kids at risk and you know I'm so proud of him. My kids are just...well, fucking amazing.

Gibson has the flu, it looks like, and Owen is doing better.
Maggie is Maggie, and that is a very good thing.

I'm gonna go make a meatloaf and some baked potatoes.