Mer Was Traumatized But She Lived To Laugh Again 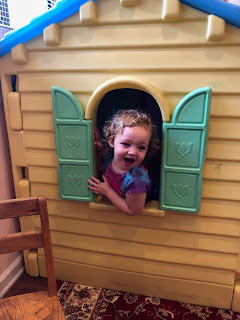 Oh, how the children love the little play house in the doctor's office! Maggie immediately went into it and shut all the shutters and doors and we coaxed her to pop out of the window and say, "Peek-a-boo!" which she did. Both Lily and I could tell though that she was a bit reticent about this visit. She seemed to know that something was not going to be all fun and games about it and I don't know the last time she went to the doctor so I'm not sure why she was acting that way.
She did fine, stepping on the scale but then as soon as the nurse tried to slide the measuring stick down onto her head, she freaked.
NO! She screamed and screamed and I doubt seriously that her height measurement was in the least bit accurate but whatever.
She was fine in the exam room with the NP until it came time for the practitioner to actually touch her and examine her at which point, my woman baby was not having it. At all. The screaming and the crying and the wriggling and the twisting in our arms was just heart-rending.
"Go house!" she kept saying, wanting to return to the safety of that little play house where she could shut the door and the shutters.
The NP examined her as quickly as she could and with as much patience and sweetness as she could but it broke my heart and reminded me exactly of how I had screamed and cried and tried to get away from doctors when I was little and I wanted to snatch that baby and take her away but of course I couldn't, wouldn't do that. It doesn't hurt to get ears and throat examined, nor does a stethoscope on the chest or back but it seems to me that Magnolia June simply does not want anyone messing with her personal self at all unless she is in control of the situation.
I mean- she doesn't even want Lily to brush her hair.
And this trait will serve her well as she gets older. She will be strong about anyone touching her in any way that she does not approve of. She will be vocal and she will resist.
She is amazing, that girl.
She had to get two shots but this office puts as many nurses to the task as it takes. One nurse per needle, one needle per thigh, one nurse to hold the child, and they were all so very kind to her and crooned to her and reassured her the best they could but oh, it was so painful to watch and to listen to.
As soon as it was all over, I scooped her up and carried her back to the house and when we entered the waiting area I said to the three or four people sitting there, "None of you heard any of that, did you?" and they chuckled and one man started talking about how his little doggie does the same thing when they go to the vet and he ended up pulling his phone out and showing the lady across from him the pictures of that little doggie and told her about how it was a rescue pup and then she told him about her rescue dogs and how two of them had only had three legs and Maggie played happily in the house while her mother finished up at the desk and when we left, Maggie, with every bit of her dignity restored, gave everyone a personal, "Good-bye."

At that point I think I was more upset than Maggie was. I am NOT going to say that it was harder on me or on Lily than it was on Maggie because of course it wasn't. But I will say that I think she recovered quicker. I absolutely cannot stand to see a child in a situation which makes them fearful and afraid. It hurts my soul and my heart because they are so defenseless. But if it helps the least little bit for me be there with them, I will do it.

And after all of that, it was time to go eat PICA! aka pizza, with August and Levon and their mama. We went to the place where May works (Midtown Pies for all you Tallahassee folks but you probably already know that) and that was so much fun. Maggie gave August a kiss and a hug and he tolerated it with silent acceptance and we hugged and kissed Aunt May and when she got the chance, she grabbed on to Levon. 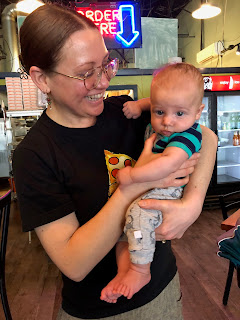 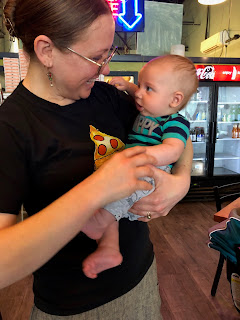 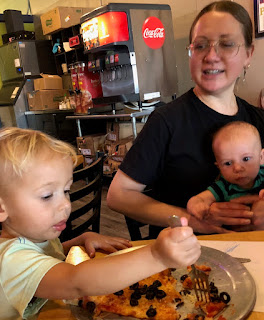 Do you see those eyes? Does he want that pizza or what? This child is determined to eat and he's not old enough! August is, obviously. He likes to eat his pizza with a fork. He is quite civilized. Maggie eats hers with her hands as is traditional. No matter how one eats pizza, it is always the best thing ever.

I was just sorry that Rachel and Hank could not join us. Rachel was at work and Hank just got...a new CAR! 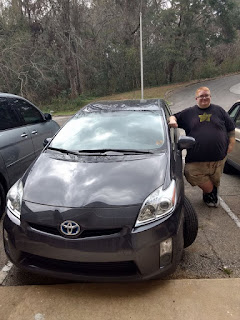 Well. New to him.
The Car Guy, who happens to be Mr. Moon, found him a Prius that he deems to be in very good shape for the amount of money that Hank had to spend and now he can drive to work or to lunch or to take his girlfriend lunch at work (which is what he was doing at lunchtime today) or to the beach or to COME SEE HIS MAMA!
We are all so excited for Hank.
Hank is pretty excited for Hank. 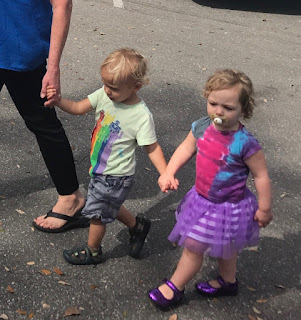 The cousins holding hands and walking safely in the parking lot with their Mer.
Aren't they beautiful?

I want to hold all of my grandchildren safely to me forever and forever, to make sure they look both ways before they cross the pavement. To protect them from pain and from fear and to give them whatever they need and often, whatever they want.
I know I can't. Neither can their parents who want these things too, any more than I could do it for them.
But we can love them forever and forever and we can do the best we can at all the rest of the stuff. And we will.

All right. I'll leave you with something funny.
Or at least I think it's funny.
I put one of those 8-month flea and tick collars on each of my cats the other day (no judgement here, please- you have no idea what fleas and ticks are like in rural north Florida) and went online to read about possible adverse effects (don't ever do that) and one guy posted that his cat had gotten DIRE REAR after the collar was put on him.
I believe this may be the best thing I've ever read online.