The Boys Are Here

Boppy and the boys have the RV all set up for camping in tonight and Boppy has lit the burn pile fire so they can toast marshmallows for S'Mores later on. Owen is campaigning for S'Mores AND Purple Cows but I'm against the idea, personally.

My across-the-street neighbor's oven isn't working so she came over to bake some lemon bars and she and Owen had a long discussion about Star Wars and he showed her some of his Star War figures and when she came into the kitchen where I was making meatballs for our supper, she said, "I can't believe his vocabulary."

Golly but he's growing up. He's going to be taller than me by fourth grade. At least. He helped me knead the bread dough earlier and he was pounding the hell out of the dough. He's just...he's just...so precious to me.

As is his brother.

While we were hanging out, looking at the RV, Gibson kept hugging and hugging and kissing me. "I just love you so much because you're beautiful!" he said.
"And because I'm old?" I asked.
"Yes!"
I love it when he says, "That's UNBELIEVABLE!" about something. His eyes are dark as chocolate chips and his daddy's Italian blood sure comes through with that one. As I was telling a friend of mine on the phone today, I think the kid is already growing a mustache. His upper lip can't be that dirty ALL the time. Can it?

Here he is, doing his favorite thing which is lying in Mer's bed watching videos on Mer's iPad on Kid Youtube. Did you know there's a Kid Youtube? There is and after we realized that the child had probably watched a video which was slightly inappropriate, Lily and I both downloaded the app. 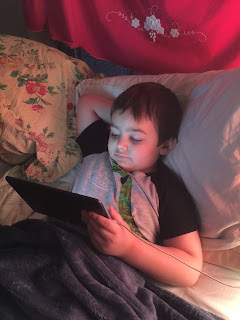 Look at those eyebrows! Or, that incipient eyebrow, to be truthful. He approves of Mer's new blanket.

And so it's been a good day. I spent some time outside picking up leaf and wood litter that the company hired by the county to trim the trees near the power lines left behind and then tidying up the front yard of downed branches and twigs. It's been so long since I did anything like that I'll probably be sore tomorrow but it'll be, as we say, the good kind of sore. And my yard looks nicer.
Not that anyone in this whole world cares except for sort of me.

Contented. That is how I feel. And the bread's in the oven along with sweet potatoes for tomorrow's pancakes and after the boys leave tomorrow I'm going to make soup for Jessie and Vergil. They are home and August is feeling better but his parents seem to have gotten whatever he had.
At least we know it's viral and will go away. Eventually.

And I've said this so many times before but isn't this what we all want? Not being sick, of course, but healthy enough to get through a virus and having enough to eat, and people who love you and whom you love back, and some outdoors to play in, some shelter to sleep in?

I'll report in on how the "camping" went tomorrow.