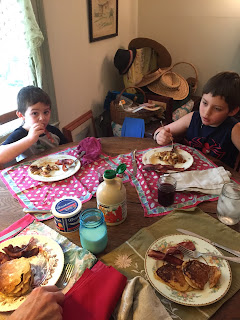 When I got up this morning at 9:00, Boppy was reading the paper in the kitchen and the boys were cozy in the Glen Den with the gas fire on, sipping hot cocoa with marshmallows that their grandfather had made them.
He gets the Best Boppy In The World Award.
I asked him if they slept last night.
"Some of us did," he said.

Owen totally and truly helped make the pancakes this morning. He smashed the banana and the sweet potatoes, chopped the pecans (in a chopper) and grated the apple beautifully. 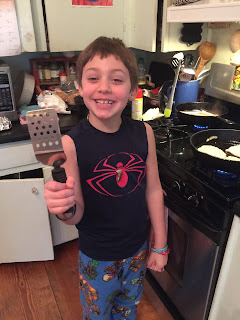 He also broke the egg perfectly and mixed the batter.

While we were eating our breakfast, we played a rousing game of Animal, Mineral, or Vegetable.
I have to tell you- Gibson Hartmann is the funniest kid in the world. And he's smart as a whip. His grandfather and I were laughing like crazy.

Lily and Maggie came over when we were about finished eating and Maggie had some pancake and some bacon. She sucked on that bacon for about half an hour. I think she liked it. Here she is, playing the switching game. 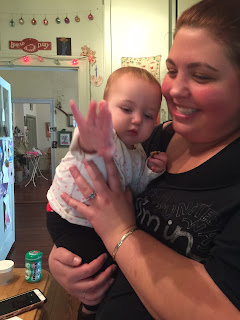 When we went out to collect the items from the RV, the boys insisted that Maggie had to go up into their bed and played with her like she was a puppy. I kept trying to get a picture but it was a little crowded in there.

And so, another successful boys-spend-the-night event. I can't believe that Mr. Moon actually volunteered to camp out in that RV. The bed is not long enough for him and of course a train went by FOUR TIMES and there had to be some Gibson comforting each time. I told Lily that I would not put myself in that position for anything in the world unless the alternative was to sleep on the ground or in a car. But Mr. Moon did it. And with good cheer. They've all gone home now and it's time for me to start Jessie and Vergil's soup. 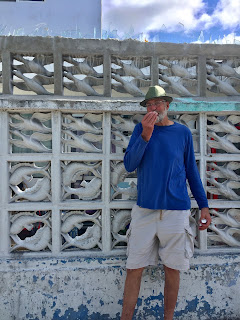 It's a beautiful day, the camellias are busting out, the cardinals are happy at the feeder and at least one of us got a really good night's sleep.

Happy Sunday. I mean it.