Stars And Planets And Being Out After Dark

Dear god. Different day. As usual.
Does that even make any sense?
No.
Whatever.

I walked on the sidewalk today and what I thought was a three mile walk was a four mile walk. I wondered why it was taking me so fucking long. I did stop to chat to a gent who sits by the road, sometimes holding his great grandson. He's seventy years old and has been married fifty years. He was nineteen when he got married, his wife was fifteen. He enjoys married life. He has a twin brother. He has nine other siblings. He was raised in Monticello. He doesn't drink or smoke but he has diabetes, high blood pressure, high cholesterol and a tumor in his brain stem but he's doing okay. Sometimes he gets headaches, but mostly he's fine.
Then his great grandson came out and I tied his shoes for him. He was awfully cute. Then I walked on home.

When I got here I realized the chip mulch fairy had indeed visited. He left me another huge mound of chip mulch.
Ooh boy.
I will tell you that it sure does smell good. Woodsy. Piney. Leafy. Green. Nice.
It's like two ginormous piles of fresh potpourri in my yard but it doesn't stink like potpourri. It smells delightful.

I worked on Maggie's little dress some. I did laundry. Two friends dropped by. Then I went to Owen's basketball practice. At five o'clock in the afternoon. Which is practically dark. 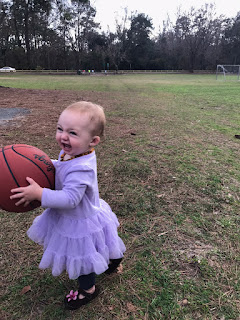 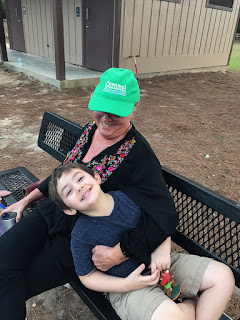 Boppy met us there but he left right after to go to an FSU basketball game and Lily and I took the kids to a pizza joint where they have face painting on Wednesdays and part of the night's take goes to Owen's school. It was chaos. THEN I went to Publix.
Jesus. By then it was truly dark. I do not go out by myself after dark except to put the chickens up and look at the stars. But I did it. I must really like those grandchildren a lot. I must even love them.
A lot.

I got home safely and did not hurt anyone nor even run over a squirrel or anything.

I sure am glad to be home. I did go out and put the chickens up and looked at the stars which are brilliant tonight. They are like diamond chips scattered on jeweler's velvet.

Here's a picture Lily sent me of Owen, reading after his shower. 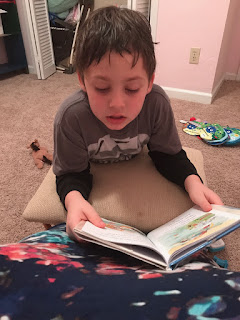 Another star in the firmament of my universe.

And oh hell, why not? Here's a picture I got of August today. 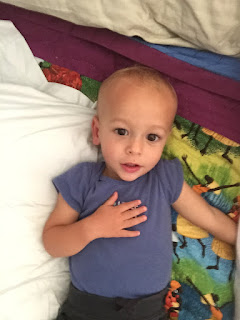 Maybe my grandchildren are not stars. Maybe they are planets, whirling and swirling and awash with life and salt water and light and soulshine.