Owen, I Wonder If You Will Remember This Day

Well, once again, life is what happened while I was busy making other plans and as I was walking (turns out I can still do it) I got a text from Lily asking if I wanted to go to Costco and maybe Japanica because Owen was not in school today due to MLK day and of course I wanted to do all of that!
Texts were shot to and from the other siblings but no one except for Lily and I were free to go and so after my walk and after Mr. Moon came home from his fishing trip, I went and picked up Lily and Owen and Maggie because Gibson was still with his True Love Lenore, his tiny elfin fairy cousin whom he is convinced he's married to no matter what we say and from whom he is loathe to be separated for any span of time.
I remembered that someone had asked me to text a picture of what I always order at Japanica which is the tofu Bento Box, either green or red curry. I took a picture of my salad (and why is that ginger dressing so damn good? I could eat it with a spoon) and my miso soup 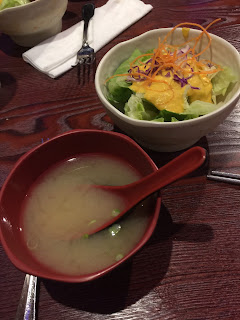 but I swear to you- when the Bento Box got there I forgot to take a picture until I'd already eaten some but here, you can get the general idea. 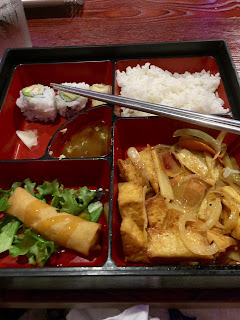 Sushi, rice, tofu with whatever vegetables they feel like cooking it with (today's selection was bamboo shoots, onions, and carrots- delicious!) and a little spring roll.
Perfection in every regard.
Maggie helped herself to my rice and I gave her pieces of tofu and she'd already slurped quite a bit of miso soup and had some of her mama's sushi as well. Owen ate all of his salad, all of his soup, and then all of his tempura shrimp sushi. 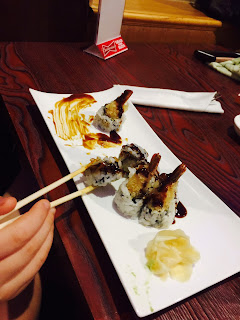 I swear to you, there is something addictive in the food at Japanica. We reach a point where we MUST go to dine there and any time that Owen has a day off from school, we somehow find ourselves there and are always, always happy.

The meal ended for Owen and Maggie with free lollypops. Here is Maggie trying to steal her brother's even as she sucks on her own. 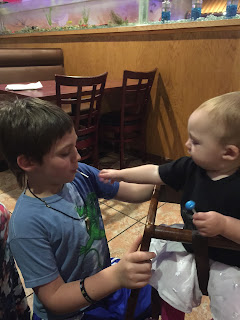 After lunch we had to go to the Goodwill bookstore where a book was purchased for Ms. Magnolia and a dinosaur book for Owen and a paperback copy of The Sorcerer's Stone.
Then, on to Costco where we bought tomatoes and oranges and bread and pork chops and peanut butter and some other stuff. They were sampling lots of things and Owen, as he does, collected all of his to save and eat in the car as a snack because, you know, all of that sushi and soup and salad just didn't fill him up.
He had his first basketball practice at 4:30 this afternoon and Maggie is indeed a little sick so Boppy said that he'd take Owen to practice and I brought the boy back here after we dropped off Lily and the woman baby and Owen announced that he was hungry and ate two pickled okra, some Chex Mix and the rest of the bread I'd made.
He is a bottomless pit.
And here is what he looked like wearing his grandfather's old Auburn uniform shirt that Boppy dug out of the closet to show him. 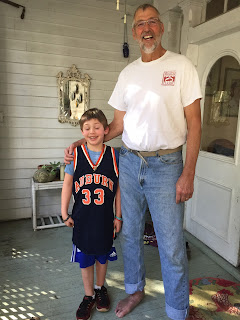 Yes, his eyes were closed but he only allowed one picture so there you go. It's hard to tell due to the ridiculous height of his grandfather, but he is growing so tall so quickly. And his feet are getting so big!

I think he was a little nervous to go and I felt bad because he told me that he wanted me to go too.
"Why?" I asked him.
"Because it's more fun when you come," he said.
But besides being lazy, I knew that for his grandfather, this was a very, very special thing. Mr. Moon spent many, many years playing basketball and for him to be able to take his first grandson to his first basketball practice was precious. So I told him that he'd have plenty of fun with his Boppy and he accepted that and off they went.
Here's a picture I got. 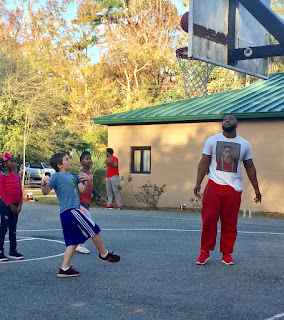 Boppy said it went great and although I know that Jason, especially, wishes he could have been there (he was working), I know that for Mr. Moon it was a very special thing. 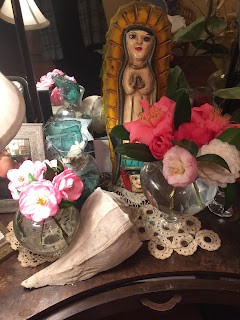 and cleaned out my purse and did some laundry and figured out how to download and use a different app for getting audio books from the library because my usual app wasn't working and like a junky whose dealer is in jail and must find another, I have to have my fix of a book to listen to at all times. And I got out the sewing machine and set it up to begin working on Maggie's outfit because I finally put a measuring tape to her yesterday and instead of worrying about how big it's going to be on her, I am now worrying that it's going to be big enough.

Leftover spaghetti and meatballs for supper tonight and salad just picked from the garden.
The yard work will still be there tomorrow.
The oak trees do not care one bit whether or not what lies under them is trimmed and tidy. They spread their ancient limbs over all and I think of that and gain perspective and am satisfied with the little I have done today. I am one human and have done what I could and did and that is enough for me.

For today at least.