Oh, y'all. Life is so messy and complex and mysterious and so often joyful and too often scary and it's all mixed up together in a way that I can't begin to understand.

Last night's party began as such a good time. Burgers cooking on the grill and basketball games. 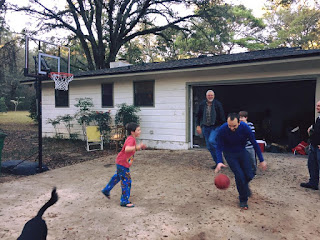 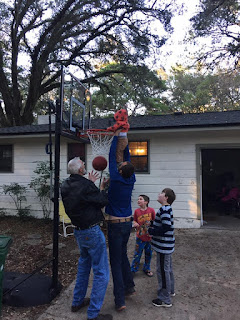 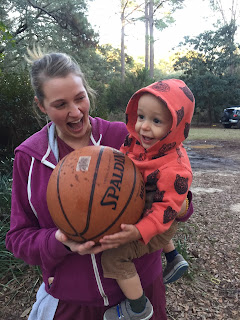 Even August got into the fun and he determined that he, too, could play basketball and as you can see, his daddy helped him.

The ladies chatted and presents from Mexico were presented and sisters wore their new silver earrings, shining in the light, and Hank passed around a bottle of Xtubentun that we brought him back for everyone to try sips and children were playing and Maggie went from one pair of arms to another and then down to the floor in her beautiful lavender dress with a tutu, her birthday outfit, and the bigger boys played ball like crazy and rode bikes and then everyone ate their delicious burgers and hot dogs and slaw and beans and then, before the cake, Owen came to me and said, "Mer, I need to ask you something," but he couldn't remember the words and I saw that his eyes looked different and his mama and I talked to him and he grew more confused and the party was whirling around around us and we got him on the couch and he kept saying, "I'm fine," but he wasn't and then he puked and then he had what I have to say was probably a seizure, his hand twitched, he was unresponsive.
His Boppy sat beside him and held on to him, I knelt before him and held on to him, gently, all so gently, his mother and father right there, holding him too. After a while, he came back a bit and we took him into his parent's bedroom and got him into bed and he slept hard but he knew who we were and...the cake? The happy birthday song? The guests? The one-year old Maggie?
Ah. Life went on.
Boppy sat beside him as he slept and I laid on the bed behind him and we watched the regular breath of him, and May came in and laid behind me and we all just loved him and Lily and Jason went out and took care of the Maggie girl and we heard the Happy Birthday song. 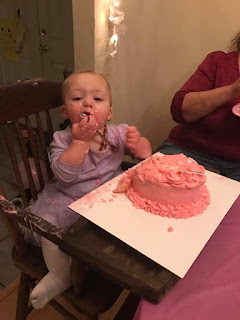 We heard the oohs and the ah's and Lily and Jason kept coming back to check and then Owen woke up, mostly himself, and wanted to go be part of the party again but first he sat on the couch with his mother, cuddled up in his name blanket and sipped some water and then, soon, he wanted cake and he had cake and by the time we left, he was himself and Lily sent a picture later of him playing Uno, his new favorite thing, with his daddy and his friend Gabe.

It had been almost five weeks, I think, since his last episode and we had all been holding our breaths, not even daring to mention anything, not willing to tempt the gods, you know, meanwhile he had the MRI which showed nothing and we have started the journey, the process to get him into the Shands Pediatric Neurology clinic but now of course our efforts shall be redoubled because this is real.
We videoed the seizure which felt so weird and wrong but we know that it's the right thing to do to show the doctors what goes on during them and Lily even said that oddly, she was glad that it happened when everyone was there because we could all help (not that there's really anything to be done except to watch and to wait) and that she thinks that he knew he couldn't have one while Bop and Mer were in Mexico and who knows? And May said, "Well, at least you didn't have to drive over here, you were already here," and all of this is true and I'm glad that Maggie is only one so that she doesn't know that her birthday was interrupted briefly but could eat her pink cake and play with the presents she had no idea she was going to get. 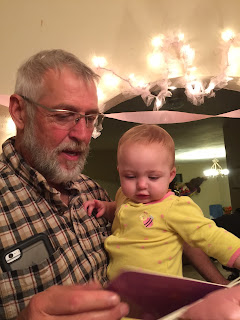 That was after the bath she had to get to remove pink frosting from her everywhere's.

And so that's how it went, Maggie's first birthday party and it was all of the things of life and of course I texted Elizabeth because she is my rod and my staff throughout all of this, my comfort and my source of information.
Now we have more of a perspective on being able to tell when a seizure is about to begin and that is a helpful thing. His other grandmother and his uncle and aunt from Jason's side of the family were there and so they know now too, what to look for, to notice, to be aware of.

Here we are on this journey of life which takes paths we would give anything to avoid but sometimes, we simply have to accept. As we sat last night with Owen while he was in the midst of it, I felt the now-familiar clinch of my gut, the panic response, but I knew in my heart that we had to simply accept what was real, to be there, to be calm, to be present, to love. Lily silently wept, Jason gently rubbed her back, over and over and we all gave comfort as we could and what else can be done until we can find out what's going on and how best to deal with it?

Here. It froze last night so yesterday I went out and picked some of my most beautiful camellias before the cold browned them. 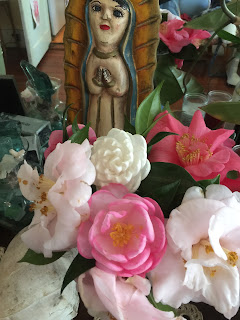 The sky is blue as can be today, even though it is cold and it's going to freeze again tonight. We've had our oatmeal and I am going to clean out the hen house and Mr. Moon is reading the book his sister sent him. 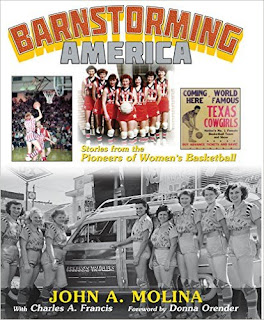 She figures prominently in it and he is so proud of her, as are we all.
As the guys were playing basketball yesterday, Hank told Gabe that Owen's great aunt is in the Basketball Hall of Fame and Gabe was suitably impressed.

And I cannot end this post without mentioning that Waylon, who was at the party with his amazing mama, Shayla (Billy had to work) gave me a hug.
Did you hear that? WAYLON GAVE ME A HUG!

Well, we go on.
Again and again and again, and we have each other to celebrate with, to share comfort and pain with, to sip from the bottle of sweet honey liqueur with, to hold on to, to sing with, to play with, to stop and be silent and bear witness with.