I've had an unusual day for me in that when the gas log repairman got here, he told me that his wife was in the truck and that she loves old houses and could she come in and see mine?
Well. Sure.
And so she did and she herself has restored and repaired a hundred year old house down in Sopchoppy and told me many stories of that and I have to say that I certainly admire her work ethic and her tenacity. She is also working on restoring a sailboat because she has always yearned to sail. A little while ago she discovered that she has some potentially serious medical issues and has decided that she wants to spend whatever time she has left making her dreams come true which she is doing with hard work and effort.
It was a good lesson for me to listen to this woman and I was glad to meet her.
It turns out that the pilot lights on every one of our gas log inserts is rusted but the repairman was able to make two of them pretty functional and he was pleasant and knowledgable and he seemed to love his wife quite a bit and so it was an interesting afternoon and a productive one in that yes, now we have at least two fireplaces to heat with and I am grateful for that.

I also cut out a pattern for an outfit for Maggie. 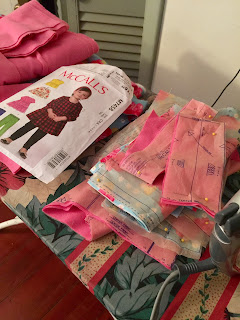 I'm afraid it's going to be way too big for her but it's a project and I need a project and hopefully, she won't grow so much this summer that she won't be able to wear it when it's cool again in the fall. Whatever. It felt good to lay out the cloth (soft flannel, of course) and iron out the tissue pattern and lay it down and pin it and cut it out. I used to sew so much back when my children were little and I miss that sense of accomplishment that you get from neatly sewn seams, from working with cloth and tissue paper and thread and pins and scissors and the iron to make something for someone to wear. It was good for me to have something to concentrate on because I made the mistake of listening to DT's first press conference since July and I was flattened into despair and my anxiety was lit back into a flame and there is nothing good to say about any of that except that I will probably not be listening to any more of his press conferences or speeches. I truly think that the man is not only suffering from more than one sort of mental illness but I think that he may also be exhibiting the signs of dementia.
Not to mention that he's a complete liar, an asshole, and a bullying rich baby who has no concept of grace or empathy or manners or actually any positive attribute or abilities which could serve him in the capacity of president but that's just my opinion.

And so I kept on moving today, from laundry room to clothesline, to chicken house to kitchen, to garden and back through it all again.

Owen called me to tell me that he got all A's and E's on his report card again and we discussed the adventure we're going to take tomorrow, driving to Jacksonville. I told him that it was going to be my job to keep him awake and that I am thinking of taking either a knitting needle or one of those barbecue forks to poke him with if he gets sleepy.
He was pretty sure that I was joking.
What I am actually going to do is to begin reading the first Harry Potter book to him. I think he is old enough and if anything can keep a seven-year old boy awake, it might be Harry Potter. I will read with as much drama as possible and I hope he enjoys it because I know I will. I remember reading the first Harry Potter books to Jessie and we still talk about those times. I can't find the actual book and I think Jessie may have it but I have downloaded it on my iPad and we shall make do with that.
Mr. Moon has gone with Lily and the children to the car repair place to have the van checked out and the oil changed so that our little journey will go smoothly tomorrow. He is such a good Boppy. Such a good man. I got these pictures. 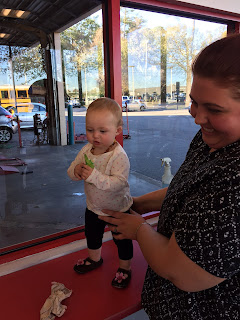 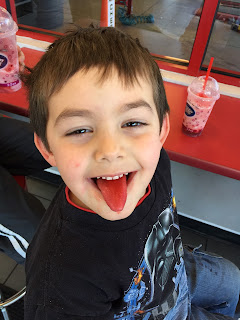 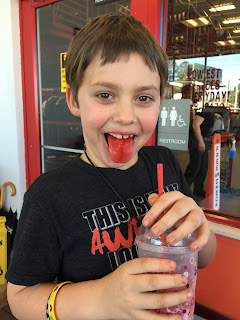 It appears to me that they were having entirely too much fun and perhaps too much red dye but they legislate the safety of that shit, right?

August is with his parents down in Orlando right now where Vergil was sent on business. They are staying at some big resort hotel which the company is paying for and Jessie reports that there is something like 4.5 acres of atrium and so they have been doing some exploring. 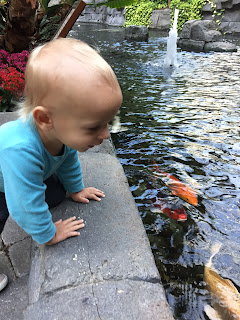 There's August looking at the fish in the pond and I wish I could be there to hear him say "issshhh" which is how he says fish. He is actually sick and running a fever but he appears to be having a good time anyway.
They will be back on Friday.

And tomorrow WILL be an adventure, riding to Jacksonville, sitting between my Maggie and my Owen, starting the process of hopefully finding a diagnosis and treatment.
I realize that none of this is going to be easy but sooner started, best begun or whatever the quote is. And it seems like it's taken so long just to get started but tomorrow we will.