From Bad To Better

Okay. Gibson said something else today that was hysterical.
How I wish I could remember what it was.
We were at lunch????
Or was it on the ride over there after we picked him up at school?
Or on the way home?
Oh god. A mind is a terrible thing to lose.

Oh wait! I just remembered! And it was on the ride to lunch. His birthday is in two months and so of course he's thinking about that a lot because he's four years old and four-year, almost five-year old kids' lives revolve around their birthdays and so he says, "I know what I want for my birthday."
"What?" asked his mom.
"An eagle!" he said.
"An eagle?" Lily and I asked.
"Yes. A baby eagle and then when it is grown, I will let it go free!"

Try explaining to a child that he can't own an eagle because not only is it illegal but also, it's a bird of prey. I tried to tell him how some birds, the birds they make pets of, eat fruit and seeds whereas eagles, which are birds of prey, eat things like bunny rabbits.

He didn't seem overly upset about any of this. I'm sure he'll think of something else he wants for his birthday.
Maybe a vulture.

Anyway, we met up with most of the family today for lunch at a Middle Eastern place (we are nothing if not multinational in our food tastes around here) and even May and Michael were able to come as well as Hank and Jessie and Boppy and Maggie and August and Gibson. And me.

We ate our dolmas and hummus and pita and falafel and Greek salads and so forth. Gibson got an order of french fries and a small container of black olives. Hey! That's what he wanted! I stole one of his french fries and after I dipped it in ketchup and began to eat it, he said, "Mer! I was saving that one for last!"
I felt terrible and shamefacedly returned the uneaten portion to his basket. 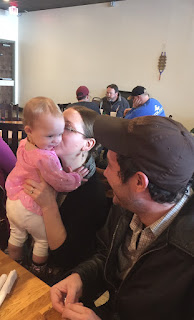 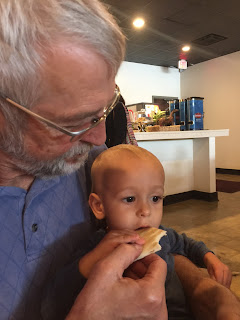 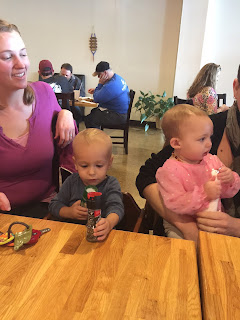 I wish I had gotten a picture of Hank. He is doing so well and I wish he'd post on his damn blog and tell you about it but he's so busy being all happy and dating and shit that he doesn't have time.
Anyway, trust me. He looks fabulous.

After I came home I put on my overalls and went outside to pick up a few of the branches and stuff that the wind blew down yesterday. Two hours later I said, "That's enough."
I took a picture of the pile of stuff I picked up, dragged and hauled but it doesn't look impressive enough to merit posting. Oh well. Doesn't matter. The important thing is that I did it and that I feel so much better for being outside where the sun came out to cheer me up and cheer me on. We are quite lucky in that the storms we had yesterday did a lot of damage and there may still be places in town where the power is still off. Big trees fell as well as branches and I hear a few cars were crushed.
You would have thought that the hurricane we had a few months ago would have taken out every tree that was going to go but no. These storms can spin off tricky little mini tornadoes that whip through in places that other storms did not bother and there you go. Tallahassee is rich in trees and although they are mostly cherished and loved, they sure can cause problems.

And that's the way it's been today. A day that started out with me not sure in the least that I had the will to carry on but now I am so glad I did. I got to kiss all my babies and I got to work outside and what I have to remember is that even if I wake up tomorrow with the blur of bad dreams, bad chemicals, and existential angst clouding my vision, things can get better.
And probably will.