Stupid, Fucking Day But Still There Is Reason To Go On 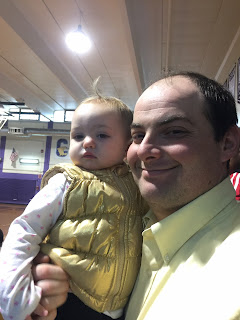 It's been a day.
And just about the best thing in it is that curl on Maggie's head. Lily said it's been there since her bath last night.
I sang, "There is a little girl, with a little curl/right in the middle of her top-head./And when she was good she was very, very good/ and when she was bad she was horrid."

Maggie likes to be sung to, as babies do. I make up songs to sing to them. "Maggie June is sweet as a spoon/ of honey."
And so forth.

Right. So.
Owen refused to play at the game again today. It caused him huge, huge unhappiness. He loves basketball and talks about how excited he is about it and then, when it comes time to get out on the court in the gym, he just can't do it. Is it the people watching? Is he afraid to make mistakes? He says he's scared. It's heartbreaking. And we don't make him play nor does the coach. Getting him to just sit with the  team is almost more than he can bear.
I think he's not socially ready. He is who he is. And I also think that he's going through a lot of stuff right now that he doesn't necessarily talk about but which he most certainly is experiencing. He knows we're worried about his seizures. He knows it's sort of a big deal, although he says it's not.
He's seven years old.
I don't think he needs any more pressure on him right now.

I looked at him, miserable across the gym, standing up against the wall, his arms crossed in front of his skinny chest, his face a mix of mad and sad and scared and defiant and all of it my Owen. All of it the face of my very deepest heart.

When the game was over, his mama had to get to work and his daddy took him and his sister and his brother in his car and we all told him we loved him and he said he didn't want to talk about basketball and we all went our separate ways.

I remember when being the mother to small children was overwhelming and sometimes I'd think what all parents think- eighteen years. What a stupid thing to think.
It's been forty years for me and my heart breaks just as badly for the hurt of my grandson as it ever did for the hurts of my own children.

This is what it is to be human.

And then I went to Joanne's Fabrics just to look at material and patterns and as I walked around the store I realized that I was having one of those ocular migraine things. The shimmering halos.
Ugh. Ugh.
I went out to the car and just sat for about forty-five minutes until it passed. I don't really get the headache, thank god, but still. It's disturbing.

I finally started up the car when my vision was cleared and finished my errands and came home, my head not hurting but feeling dull and spacey, flat and as dense as the heavy gray sky. The news is so awful. As bad as I thought Trump would be, I never could have imagined that he would twist our country the way he has in eight short days with his evil, insane executive orders.
Someone has to stop him.
How do we stop him?
I am terrified.

It's been a day. A day of gray and of cold and of rough edges and no answers to questions that catch and tear the mind and heart like the jagged edges of a cold, gray rock catches and tears the skin.

This, too, is what it is to be human.

But. Here are the good things:

The way she holds her face to me so I can kiss it so softly, a hundred times.

My heater, which is working fine now, all fixed and blowing clean, I would assume, instead of dirty.

Three eggs I found today. One regular size, two tiny. I think that Dottie laid the big one, Darla definitely laid one of the tiny ones (I know because I caught her just leaving the nest in the pump house and there was an egg, small and as warm as her own body), and one from Violet, I think.

The cardinals, the blackbirds, the robins.

The pale hawk I saw, dipping over the highway as I drove.

The resisters.
The protesters.

The knowledge that even though all of it seems so overwhelming now, so frightening, so terrifying, so wrong and so unbelievable, the darkness cannot prevail.