Good morning and hello and Mr. Moon got up at some ungodly hour to go and fish for stripers below the damn.
Not strippers. Stripers.
"Leave the fish where you found them," I told him.
Stripers are not delicious and the only way I was ever able to enjoy eating them was when our friend Anne-Helene from Norway was living with us and used to make what she called "Norwegian Fish Dish" which had ingredients like cheese and potatoes and cream as well as the fish and you could have substituted carpet samples for that fish and it would still have been delicious.

Anyway, it's a bit gloomy here today in Lloyd. I found yet another messed-up egg in the hen house this morning. My theory is that Dotty and Darla are starting to lay but have not yet matured enough to produce an egg with a shell thick enough to suffice for true egg-like properties. Mick has been showing some interest in them so I know it's time. Yesterday I saw him over by my neighbor's chickens who are all fenced in now, a lovely group of shiny, fine, fat hens. He was peering at them as if just trying to figure out how to get over that fence and have his way with them. Some birds may mate for life but chickens mate for seconds.

I have to take a walk today. I haven't done any real walking since we were in Cozumel. It seems like every second since we've been back has been filled with one sort of activity or another, some of them important, some of them not so much, but all of them together have given me excuses not to get out there and walk my woods and fields and I need to do it for body and for soul.
Beyond that, I haven't much of an agenda. Cut new camellias to replace the ones in the hallway.
Clean out my purse. Trim up and haul away some of the dead stuff in the yard.
Etc.

I dreamed this morning that I was participating (by accident?) in some sort of reality show. It was a mess and I had no idea what I was doing but at one point, we were all gathered to get instructions and the presenter said something about us "not acting retarded."
"Excuse me!" I shouted. "That word is disrespectful to the disabled community!"
"Shut up!" said the presenter and many of my fellow participants agreed with him and I spent the rest of the dream trying to figure out how to get the hell out of there.
Also, I had lost my phone.

Well, that's life in Lloyd today.
At least in my tiny corner of it.

Oh. And this from today's Tallahassee Democrat. 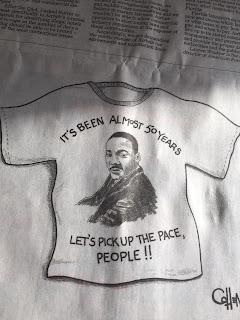