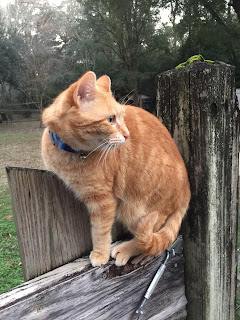 I was at Lily's at 10:30 to stay with Miss Magnolia and she was so darling and sweet and funny. Her favorite thing to do is to go from one pair of arms to another, as fast as the change can be made. She reaches out her arms to me and Lily hands her over and then as soon as she is settled on my hip, she reaches out her arms to her mother and then it all starts again. But when it came time for Lily to go she was absolutely content to stay with me and we played and tickled and snuggled.
Greta, Jessie and Vergil's dog, has been staying with the Hartmann's and when I went to pee in Lily's bathroom, Greta followed me in as doggies do sometimes with Maggie following behind her and for a few seconds, Greta wanted petting as I was peeing and her tail was going back and forth with great delight, hitting Maggie right in the face with every wag. Poor Magnolia! She just stood there with an expression on her face like, "Why is this happening to me?"
She did not move but she did not cry either.
Greta, of course, had no idea she was slapping the baby with her tail. She only wanted to be loved on.
And all was well.

I packed up Maggie in the car after awhile and we drove into town and picked up Hank and met Lily and Gibson and Mr. Moon at a place for lunch and Jason got off work early and was able to join us which was so nice. And then, because Jason was able to jump in with the child care, he took Maggie to her one-year check-up (have I said lately how much I love and respect Jason and how much I admire the way he fathers his children?) and Lily took Gibson home with her and I went and did my grocery shopping and on my way home I realized that it was just exactly the time that Lily would be waiting on Owen's bus when I would be passing by. Yesterday, when we thought that I would be doing the pick-up, I had told Owen I'd be there so I pulled in beside Lily and Gibson and I visited some while we waited for the bus and I got an extra hug from my big boy.
As he got off the bus I went to greet him and I was doing a silly little dance and he said, "Mer. First off, why are you out of your car? And secondly, why are you doing that?"
That being the silly little dance, of course.
That boy. One minute he is my darling little guy, wanting my attention and affection and the next he is seven, going on seventeen, practicing being cool.

Well. This is the way of it and I have the experience and wisdom to know that and I also know that as a grandmother, I can be as silly as I want and the grandchildren just have to deal with it because they know to their bones how much I love them, plus they give me a huge break in that I am old and old people do weird, weird things. As we all know.

And so it is and I've spent the rest of the day finishing up chores that were left undone yesterday and the heater guy came and showed me the rusted out pipes of the heat exchanger which could have killed us, blowing dirty as they were, and informed me that another part is shot too and he went off, shaking his head, saying that he'd be back with the part after checking to see if it was still under warranty. I have never met a repairman who seems so depressed to give me bad news. I find myself reassuring him that it's okay, it's not his fault, and that I know he will fix it all.

And here I am, in this state of peacefulness. Tomorrow night the boys are coming to spend the night and Boppy is talking about camping with them in Scott and Yolie's van that we bought. I told him to wait and see how he feels about that tomorrow night but the boys have already gotten a hint about it and they may insist upon it. And I have bought sweet potatoes for pancakes and there is bacon but they're going to have to come into the house to eat because I ain't cooking on no propane stove in a van unless I have to.

They'll be fine with that. The TV is in the house.
And maybe we'll eat outside in the backyard because the weather is so temperate and the camellias are putting out pretty blooms again and the robins have been in the neighborhood and we shall see, won't we?

May we all be at peace, if not right now, then some time soon.
I would wish that for all of us.
You know I do.