How Does This Bizarro World Thing Work? 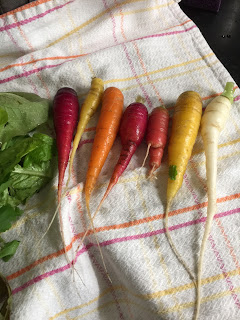 I have taken a vacation day in the country today.
The country of my-place-in-Lloyd.
I did all of the simple things I love doing and you know what they are. I walked, I did a little yard work, I cooked beans, I picked salad including those pretty little carrots, I finished Owen's Harry Potter cloak, I did laundry and hung clothes on the line.
I took a nap.

I am having a very hard time trying to figure out what it is I need to do about this whole DT thing. One thing I have decided is that I need to start calling him by name. His name is Donald Trump. He is the president. This is a reality. Although it feels as if I have woken up in Bizzaro World I am fairly certain that his is not a nightmare. In nightmares, I always end up trying to glue the tiny letters of my phone keyboard back in correct order because they have fallen off, and the last time I checked my keyboard is as virtual as it ever was and all of the letters and numbers and stupid emojis are exactly where they are supposed to be which is not helpful at all because even though in my dreams I just know that if I could get my phone to function I could call for help and rescue, in this case there is simply no one to call.
Oh sure. My congressmen.
I have so little faith in that path that I might as well trying calling god.

As I wrote a friend today, I think that the Republican lawmakers have their heads all UP in Donald Trump's pants. I really did have some faith in our system and in human beings in general until this election occurred but now I see clearly that our elected officials (or at least those of the Republican party) are the weakest and least moral of any humans I ever thought to contemplate and trust me- I did not think much of them before. But at least I thought that some of them might notice that the Emperor was wearing no clothes. I have no idea why I thought this.
I'm not stupid.
And actually, I would not be surprised to learn that many of them are quite aware that Donald Trump's ass is hanging out, his tiny junk on display for all to see and just don't care because they are finally getting the chance to do what they've been wanting to do forever which seems to involve sticking it to the black guy who was our president for eight years while at the same time, creating the world in their own wet dream of a country where they, the rich white guys, can say, "I've got mine (which would be money, status, the guarantee of a good education, fantastic health care, the ability to get and have sex with hot, smokin', much younger women, and all of the privileges which go with these things) and the rest of you can go fuck yourself."

Basically, this is how I see it.
And if you think for one moment that any of these people and the people who back them are going to let go of that dream for a millisecond now that the opportunity for success is so ripe and rich and royal and golden, then I think you're deluding yourself.

And also- I don't believe that any of these men (mostly men, let's be honest) are the brightest candle in the chandelier or the sharpest knife in the drawer or the hottest burner on the stove which means that in general, they can't see farther than their noses or their peckers, whichever one is longer, to understand that the decisions they make could absolutely mean the end of the world as we know it.
They feel fine.

You can't argue with these people. You can't educate these people. Their minds are shut, their opinions formed. Their bellies are full and their god obviously loves them.

So what do we do?

I have no clue.

And so I've spent a good day doing what I do know how to do which is basically the same things women have been doing for eons which is to take care of hearth and home, albeit with better tools and electricity.

What are you thinking? Are you writing your congressmen? Calling them? Are you contemplating running for office? Are you writing opinion pieces? Are you on your knees praying ceaselessly? Are you calling for refills on your Ativan? Are you trying to dialogue with people who are on the other side of the divide? Are you posting on Facebook? Are you tearing your hair out? Are you running an extra five miles a day? Are you eating chocolate and macaroni and cheese like there's no tomorrow? Are you reading escapist literature? Are you meditating? Are you trying your hardest to be the light in your own world? Are you thinking about taking in a rescue dog? Are you planning a move to Canada or Costa Rica? Are you sleeping twelve hours a day? Are you just living your life the best you know how, hoping that we survive the next four years? Are you convinced that denial is an excellent coping mechanism?
Tell me. Because I need to know what to do.

I'm lost and I'm drifting and I'm doing the best I can but it just doesn't seem to be nearly enough.

Yours In Confusion And Bafflement...Ms. Moon