Well, it's been quite a day. Owen had a bit of trouble wanting to play the basketball game in the gym with all of the people and all of the noise. He always does this. Remember how long it took him to go to pre-K without crying? And in his first games of T-Ball he refused to go up to bat?
His Boppy and his daddy and his mama tried to get him to go play but he just couldn't do it. Bless his heart. I think he played for a few minutes but then he retreated again to the sidelines.
After the game, one of his coaches said to me, "THAT'S a boy with heart. He's the one who's going to be something."
I fell in love with that coach.
We all went to eat lunch at China First afterwards and Owen rode with me.
"Need some water, buddy?" I asked him. He was being so quiet and I knew he didn't want to talk about it.
"No," he said.
"How about a glass of whiskey?" I asked him.
"Maybe," he said.
And then I told him that I loved him and was so proud of him exactly the way he was and for who he was and we didn't need to talk about it any more and he ate a whole bunch of noodles for lunch.

I hear that the Tallahassee March was amazing. Jessie and her boys marched and I am so proud of them. 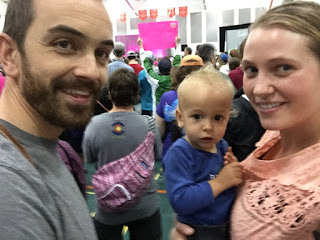 I'd like to give a huge shout-out to all who are marching tomorrow. I wish I were the marching kind but instead, I am the stay-at-home kind. I hope that at least one of you will hold me in your pocket as you do what I seem unable to do. I thank you. I love you. Wherever you march, be safe. The whole world is watching.

And damn but this appeared on my timeline this evening, posted from Linda Sue Nelson Hoofnagle in Bellingham, Washington. 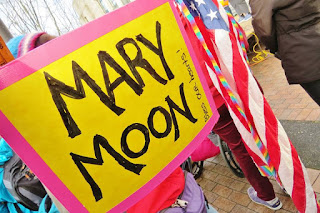 Made me cry.
On the other side, Linda said, was printed "Not Up For Grabs."

Which was perfectly perfect.

Lord, but I feel carried along on the wave of all the people who took to the streets while I huddled in with my family and just appreciated so much the sweet coziness of my home when the crazy winds and rain came upon us.

Mr. Moon and I sat out on the back porch this evening and played some cards which we have not done since we got back from Cozumel. 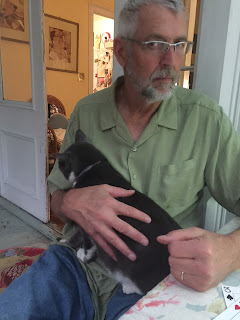 Jack, who is getting so fat that when he jumps off the bed the floor shakes, cuddled up to his man and we have not finished this game but I begged off to start out supper. I'm cooking rice and spinach and am going to boil shrimp that we stopped and bought on our way home yesterday as well as three soft shell crabs which I have never cooked before but from what I read, the less I do to them the better.

I will dredge them in some flour and seasonings and maybe a few panko crumbs and pan fry them in a little bit of olive oil and butter and I am going to simply boil the shrimp with Old Bay and garlic and lemon slices. I will make a cocktail sauce and a sort of crab-dipping sauce and will make a casserole with the spinach and rice.

The rain has gone for now and the frogs of spring are whistling their eery bird whistles, looking for love.

Thank you. All of you. Who marched and who stayed home to do whatever your part in this is.

Goddam. Ain't no orange billionaire with fake hair and a wife who obviously needs saving from his clutches going to change my world.

Beatle Magic. And as I listened to this, the frogs joined in and the rain began to fall again.


Dear god. We must believe in something.