Leon County, the county just to the west of us, has declared a volunteer evacuation for anyone who does not feel that they have the supplies or resources for at least 3-5 days of being unable to get to a store or live without electricity.
This is, of course, a worst-case scenario but it has added to the feeling of anxiety around here. At one point today I got a phone alert which literally said, "Evacuate immediately." I hear that it was a mistake alert sent in Jefferson County which is where I live.
It didn't help.

Everyone is on edge. People are snapping at each other and it's completely understandable. Throw in people being in closer quarters than usual and things can get unpleasant.

The problem is, is that this storm is not doing what it should be according to those who know. And among those, there is vast disagreement about how the storm is going to affect our area. I've read it could arrive as a Cat 3 or Cat 5 and I've also seen it said that no, no, it will only be somewhat like Hermine was last year but not as intense. And all of this depends on whether Irma slips back onto land as it travels northward which would deplete its energy or if stays on the nice cozy warm waters of the Gulf which would only strengthen it.

Well, it is what it is and it will be what it will be and I have people driving up from Tampa right now. The storm isn't supposed to hit the keys until daybreak tomorrow but we are already getting some light gusts. Mr. Moon spent all day long gathering up stuff outside and taking things to the trash. I wisely spent some of my time cleaning my old office space FOR ABSOLUTELY NO APPARENT REASON except that it's been needing doing for a long time and why not? It felt sort of good to get that done. And then, when I got the news about my dear Lisa-Lisa coming up with her mama and her children, I made soup. Of course. 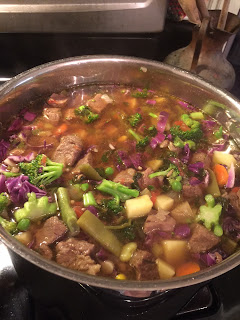 I told Mr. Moon that I really hope we don't evacuate because I'd hate to leave that soup behind and lose it.

Well, since I started this, the Ativan I took earlier has kicked in and I'm sipping a vodka, cranberry, pineapple, and tonic and I feel a lot less stressed. If you want to judge me about my mixing of meds and booze, you just go right ahead and do that. Meanwhile, I'm grateful to have some relief of the simmering panic I've been feeling all day although I just went into the kitchen to stir some spices and seasonings into the soup and the guy on the radio is warning us that things can be replaced but our families can not.

Breathe.
We're going to be all right. I can almost bet the ranch on that.