From Beans To Tofu To Eggs To Bacon. And Guava Bars 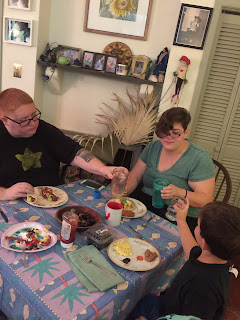 Well, it was a fiestita indeed! There you have Hank and Rachel and Gibson toasting. This was right after Gibson made us all do the hands-together/hands-in-the-air thing and we had to chant a strange chant and I looked at Owen and said, "Does he do this at home?"
"Nope," said Owen. And proceeded to chomp down on his breakfast burrito which contained cheese and bacon because that's what he wanted. 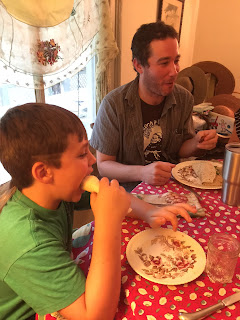 I think Michael put everything in his tortilla.
And dang, there was a lot to go in one.
Rachel and Jessie encouraged me to cook the bacon in the oven.
"That's the only way I cook bacon," said Rachel.
And so I laid out the strips on a cookie sheet and baked it and damn. I'll never fry bacon again. What's wrong with me that I didn't know about this?
Like I need a better and easier way to cook bacon.
Rachel also brought guava bars. Yes. Guava bars. They were absolutely delicious. Sweet and pungent with that taste of guava that takes me right back to my childhood. That girl knows I love guava. She does too. And she is a damn fine cook.
August ate for about two minutes then wanted down from the high chair. 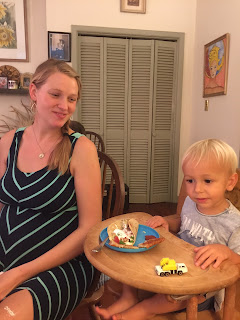 He grabbed my hand.
"Come," he said. Like Jesus or something.
I didn't though. I was too busy eating. That's probably what I'd tell Jesus too.
"Sorry, Jesus. Can't follow you right now. Gotta eat this burrito before it gets cold."
I did read him two books later though. August. Not Jesus.

Magnolia went from lap to lap as she does. 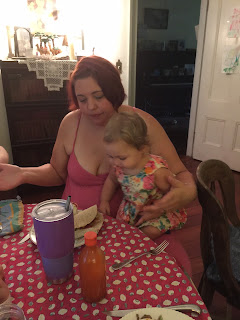 She doesn't want to miss anything that might not have been put on her plate.

And here's May with Lily. 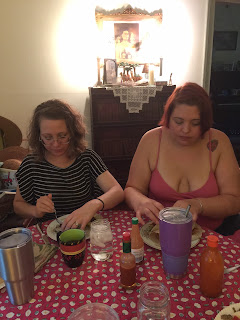 And that is everyone who was there because Vergil was painting and Jason was working and Mr. Moon was catching red snapper.

So it was fun and by the time it was all over and I finished up the little bit of tidying that the kids hadn't done, I was ready for a tiny nap and since no one was here to stop me, I took one.
If there's one thing about older age I do like, it's that I get to take undisturbed naps.
Sweet, sacred, quiet, blessed, peaceful, holy naps.

And that's all the news I have today. I did find four nice white eggs on the front porch by the big fern. I did the float test on them and they all passed so they are now in the refrigerator. Those darn chickens. I know some of them are laying in places other than the nest.
What else is new?
Free range chickens get to choose where they lay.
But we all know I'm not in this for the eggs. Although the eggs are a royal reward.

It was a good Sunday and I am so grateful that all of my babies came out to see me and eat breakfast burritos.
And guava bars.
Mmmmmm...
Guava bars.