Mr. August And Mer Have A Whole Lot Of Fun 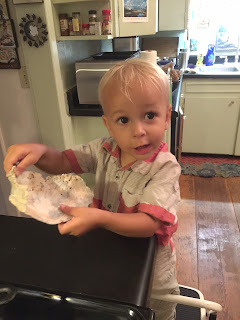 So. How can you be too worried about anything when this little goof is playing with you?
We had so much fun. 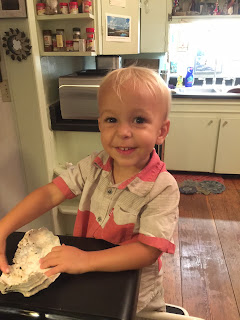 He's definitely going through a stage with his mother wherein he doesn't want to do anything that she wants him to and there are tears and NO's involved but that's the way it is with Mama. My theory is that children know that their mothers will not kill them; everyone else? Questionable. So with me today he was as sweet and agreeable as a child can be. Everything I suggested he was completely onboard with except he did not want to lay down on the bed and read books! No! We could sit on the couch and read books or sit in the swing and read books but NOT ON THE BED! Because, you know- he might fall asleep.
And we read a lot of books.
We fed chickens. He already knows Mick by name and can also say Joe Cocker. We found Dearie next door in a fenced area by my neighbor's chicken coop and as soon as Dearie saw we were passing out treats, he slipped through a gap in the fence and came to beg for the cornbread. 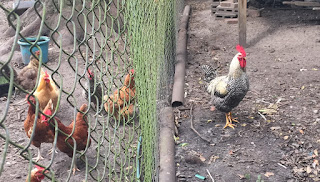 I don't know if that rooster is smart to stay out of Mick's way or if he's just craven. Either way, he sure is a handsome fellow. Mick and Joe Cocker seem to have worked out their relationship quite well. They appear to coexist fairly peacefully and I am glad of that.
And oh, I am quite sure that our Trixie is gone. I have not seen her in days and days. I think she went off to die and probably did.
Rest in peace, you sweet old singing hen. You were Mick's favorite and Elvis loved you too.

But back to August. I let him stand on the step stool where he couldn't burn himself to help me cook while I was making his macaroni and cheese. That's when I took those pictures at the top.
"Shell?" he asked.
"Yes," I said, and then I showed him how I use the shell as a spoon rest and next thing I knew, he was stirring pots with every wooden spoon available. 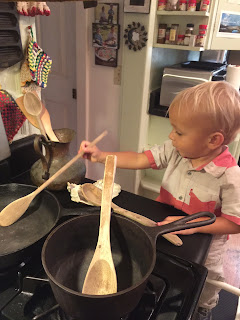 I would sing a little song about stirring as I attended to the macaroni and then I would tap-tap my spoon and lay it on the spoon rest and then he would stir his pots and sing a little and sure enough, tap-tap his spoon before he lay it down.
He was almost frantic to get in the high chair, which he loves, and I got him in and gave him his plate of macaroni and cheese and pieces of watermelon and he was beside himself with joy. We both ate vast quantities of macaroni and cheese and don't tell Mama but sometimes we even ate like a bear with our fingers. 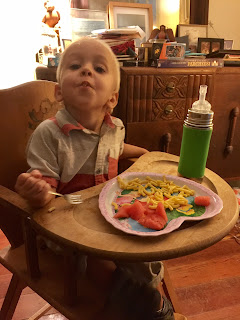 There he is demonstrating his method of sucking air through a noodle. He is very good at this. Probably world-class-professional-good. 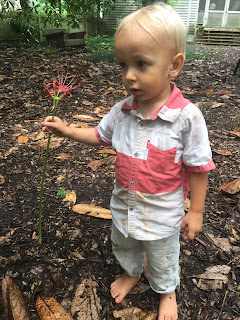 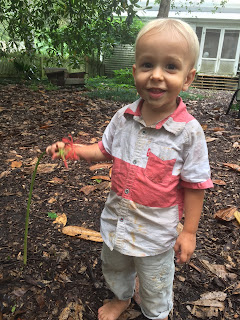 We gathered eggs and found one just laid and I held it up to his cheek the way I've always done for his cousins so he could feel the warmth. He carried it to the house and then very, very carefully laid it in a bowl.

We walked to the post office and he almost fell asleep but did not so we came in and played with little dinosaurs and tigers and zebras and then his mama came. He was so happy to see her but ran to the other side of the house so that she had to chase him and take him up in her arms and they kissed and he was merry with the joy of it all.
He did not want to leave and when Jessie was buckling him into his seat he said, "MerMer drive."

It is lovely being the grandmother where you can do things like eat macaroni with your fingers and encourage such foolishness in the children without regard to their table manners. Table manners are not my job! My job is to get on the floor and play with dinosaurs and kiss toes and show babies how warm eggs are when they are fresh out of the hen's butt. My job is to encourage silliness and reward it with laughter and more kisses. My job is to make the mouse puppet talk and kiss him and to help open the flaps on the pages of books that have flaps and to sing songs while I stir and to be right there when the child goes up a ladder or learns to climb on the rocking horse. My job is to notice and celebrate each accomplishment, each smile, each question.

It's a very, very good job to have. And the rewards are endless. Plus, it's fun.

And to top it all off, after August left with his beautiful mother, I did another egg sweep and found a gorgeous new green egg which means that either Owl or Lucy are laying now. 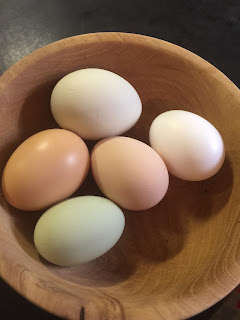 I have still been checking the tropical weather websites way too frequently. The latest projections continue to have it heading east but these are early days and those storms will do what they want. We had a little rain and wind this afternoon and lost power for over an hour just as a result of that.
Practice run?
No. Just Lloyd.

Everyone be well. Everyone stay safe. Don't be afraid to eat macaroni with your fingers. Hold a fresh, warm egg up to your cheek. Celebrate all accomplishments.

Love. Do that. Love.