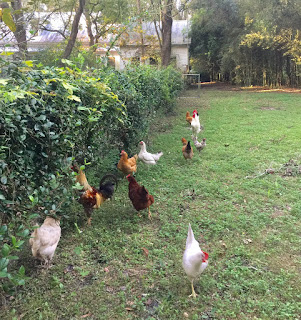 I woke up this morning knowing that I had to take my phone in to the repair guys because it would not take a charge. I'd done all the stuff you're supposed to do and I'd limped along for a while with it as it would charge on one charger but not another and then vice versa or in the car but not via an electric outlet and then, last night, it just quite taking a charge anywhere.
"Nope," it said. "I am not charging." And it wouldn't.
I'd already planned to go to town because I needed to get some things for Owen's birthday party which is tomorrow although his birthday is Tuesday. When Lily asked him what he wanted on the menu for his party he said, "A salad bar and grilled steaks, pork chops and ribs."
Okay. Wow. What happened to hot dogs? I guess almost-eight year old boys have more sophisticated tastes than seven year old boys. Or at least meatier tastes.
I had volunteered to get the chips and stuff like that and then I volunteered to make potato salad and macaroni and cheese so a visit to Costco was in order. I envisioned having to leave my phone and driving halfway across town to Costco and Publix and then back to get my phone and so forth but it turned out that all my phone needed was a good cleaning out of the charging port.
And yes, I had tried to do that but I obviously did not have the correct and needed tools to do so.
So the sweet guy at the repair place took my phone back to where the magic happens and cleaned it out and brought it to me and I was so happy I wanted to kiss him but I did not.
Then I went on to Costco and Publix and got what I needed, including macaroni and cheese at the Costco because they were sampling it and it was delicious and why not? Hell, yeah!

When I got home Mr. Moon texted me to ask if I was home and I replied that I was and he said, "I'm going to call you," and of course that was a bit worrisome but I figured that he'd run into some project and wouldn't be coming home tonight which is what he had planned, but tomorrow.
Well, I was halfway right.
It wasn't a project, it was a fall from a ladder directly on his back on the hard clay ground when some wasps swarmed him.
"Oh my god!" I said. "Do you need me to come and get you?"
"No, no," he answered and then proceeded to tell me that his hunt-buddy, who works in some medical-off-shoot field had him iced and Ibuprofened-up and had given him Benadryl for the wasp stings. All the very things I would have done.
He told me the whole story and I could tell from his really peppy voice that the fall was bad enough for his body to release those natural morphine-like substances which are so very, very delicious while they're dancing around in our bloodstream.
So. He IS spending the night in Georgia but insists that he'll be coming home tomorrow for the birthday party and I made him promise that if any of about ten things happened, he'd go to an ER. You know- numbness of hands (his feet already are numb), vomiting, seeing blood anywhere that he shouldn't be seeing it, etc., etc.
He said he would and I trust his friend to keep watch.
But damn.
My poor baby.

And then I took a nap because, well...I could.

I've got potatoes and eggs for the potato salad cooked and my phone is charged to 98% and I got six eggs today and I need to wrap Owen's presents and President Petulant Child is threatening nuclear war and also NFL players with equal ferver and here are two pictures. 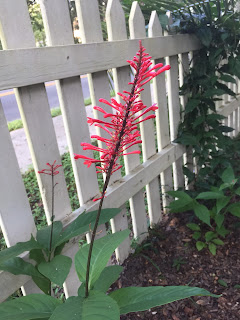 Firespike. I have rooted and transplanted this particular plant all over my yard. This is one of the ones I planted by the front gate. Nothing makes me happier than seeing things which I have planted thrive. 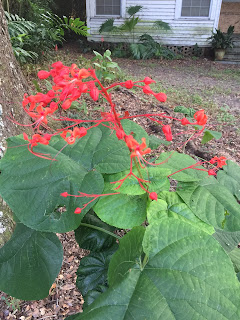 And I have no idea what this plant is. Do you? I stole some from the yard next door where they grow abundantly, when the house was vacant and I believe this is the third year it's been in the ground and the first year it's bloomed here. I can't find it online.

I suppose I should go chop celery and onions and pickles and eggs.
I surely hope my man is okay.

Oh!!!
Wait!
Who sent this book to August and me? 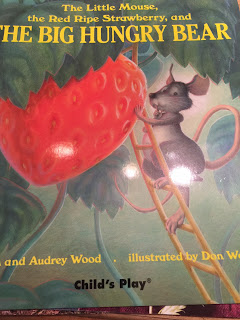 It came to the Post Office today with no identifying sender other than Amazon.
It's such a darling book. I can't wait to read it to August and Maggie, too.
Please let me know if you did. I would like to thank you properly.