Back On My Knees In The Dirt 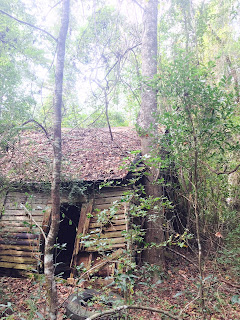 I took about an hour and a half walk this morning but please- that is so misleading. I spent at least half that time talking to my favorite Lloyd ladies.
I took Miss Liola some eggs and pickles and we chatted for a while about the storm and the grandchildren and local gossip and so forth and so on. She is a merry woman and laughs a lot and for some reason, has just loved me from the start. She always hugs me before I leave and I cherish those hugs. I took a picture of the fally-down house after I left her yard and if that tree on the side wasn't there, having grown into the little old cottage, it would have surely collapsed by now. That right bottom corner is coming apart and the whole place is leaning more and more precariously. 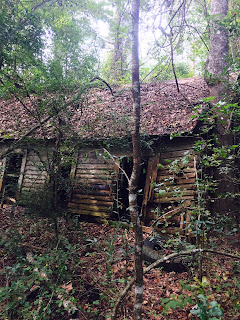 I will be sad when it goes entirely. Then again, that may take another decade. Who knows? The earth has its own time to reclaim what it wants.

Miss Mable was out in her yard when I walked by and I stopped to chat with her too. It took quite a while for her to come to trust me and feel comfortable around me. She's a different sort of woman than Miss Liola. She's a proud and stridently independent woman and her house and her yard are her constant concerns. I swear, every oak leaf that falls bothers her. She pointed out a limb that had fallen in the woods that encroach her yard and told me she has to get someone to take that out because a bear could hide behind it and she can't have that. I didn't have much to say about that. It is true but I doubt it's going to happen. Still- who am I to say what a bear will or will not do?
She asked me if I knew how to get rid of a vine and I couldn't figure out what kind of vine she meant so she took me around to her back yard and showed me. It was one of those damn invasive potato vines and I told her I had them too and the best way was to get a goat but if that wasn't practical, to do her best to pull the roots and gather all the damn potato-looking fruits it drops and burn it all. They are a horror show. I did not know that her backyard had once been a sort of nursery before she bought it and there are lovely plants back there. Rose of Sharon and Confederate Rose and camellias and sagos and all sorts of things. We talked about plants and roofs and yards. She pointed out another branch that had almost fallen, but not quite, in a tree in her front yard and said that she had to get that taken down. It was driving her crazy. "You're so funny!" I told her. "I'd just let it be until the day it dropped and it wouldn't bother me at all."
I never would have said that to her when we first were getting to know each other but I said it today and she just laughe. I need to take her some eggs and pickles too.

When I got home I cooled down some and then got to work out in the garden and it almost killed me but goddam it, I NEED TO PLANT ME SOME GREENS! I yanked the spent eggplant and okra and hauled it to the burn pile at which point a swarm of red ants attacked my arm. They'd been crawling all over the okra and I hadn't noticed them. I about gave up at that point but for some reason, although they looked horrible, the bites didn't affect me as strongly as they usually do so I just carried on. 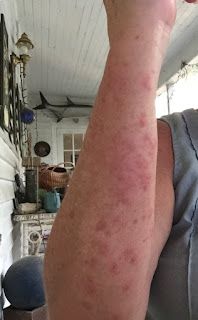 They still look like a mess but they aren't itching so I'm fine.
I sweated through my clothes and my hair and my hat but I got maybe a quarter, at least, of the garden cleared and I'd love to get the rest of it done this week so that Mr. Moon can till and then I can plant. I am sick and tired of the sad salad greens in the store. Even the ones in the fancy plastic jewel boxes, even the organic ones, are way past their peak even when they're still in the store. I opened a fresh package of arugula the other day and took one sniff and threw it all out to the chickens who probably didn't eat it.
It wasn't fittin' as we say around here. Not even to throw into soup.
I also cleaned out the hen house and gave my sweeties fresh hay.
I mended a sheet and I did laundry and I just feel pretty darn accomplished for the day although I know that by bedtime I'll be doing some quiet moaning about how my hips hurt but fuck it. It's been worth it.

Oh! I have been communicating with the lay minister but I'm done with that. His whole thing is the cliched belief that if all you believe in is science and evolution and that we humans are nothing but animals, there is absolutely no reason to act in a kind and loving manner. This always strikes me as the thinking of a person who has a great fear of doing horrible things. Of course I told him that that was insulting and pointed out that the Bible is full of rules and crap that we just simply do not follow these days (such as slavery and stoning to death your recalcitrant child) and also asked him which god I should follow, there being so many.
He suggested a "simple" book I could read to show me the light but I told him I'd already read the Bible and that that action had actually made me the nonbeliever I am today.

He has the religion gene. I do not.
He also obviously has a great need to be told what to think which is something I have never been able to tolerate or understand.

And so it goes, as dear Kurt Vonnegut so often said.
And so it is.
We move on.