Friday. And You Know What That Means! Dinosaurs! Oh. Wait. I Meant Martinis

Dear god. Why didn't I take more pictures today? I mean, I was on a roll this morning with the spider web and the chickens and the hurricane lily and then I had a huge opportunity because I went with Lily to get her hair trimmed by Melissa and I did get this one 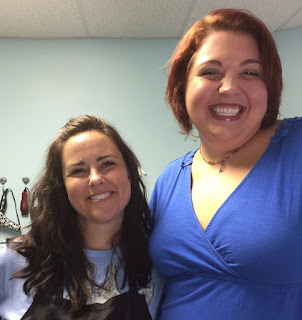 but I really wanted to get one of Magnolia in her new dress and just could not.
That child won't stay still for one second. When I got to Lily's, I said, "Maggie, do you want to put on your new dress?"
"Yes," she said. She says yes a lot. She's a very positive person in some ways.
So I put on her new bloomers and her dress and she loved them and pranced around a little bit until we left to go to town. As soon as we got to Melissa's shop she immediately asked for candy and knew where it was because this was not her first Melissa's shop rodeo. And Melissa, because she is the sweetest lady in the world, gave her not one but two lollipops. Maggie was happy. Maggie loves Melissa. We ALL love Melissa.

So after the haircut we went to meet everyone else except for May and Michael because of course...work, but two other friends joined us, including Juancho, Melissa's husband. We'd asked Melissa but she had more appointments and couldn't leave. And Lord, but that lunch was a trial. There were eleven of us and it's a place where you have to stand in line and order which we did and I swear to you that Mr. Moon and I had to wait twenty minutes just to order. It's a case of the restaurant getting really popular really fast and they just can't cover it all no matter how hard they try and they were indeed trying.
But here's Mr. Moon and August. 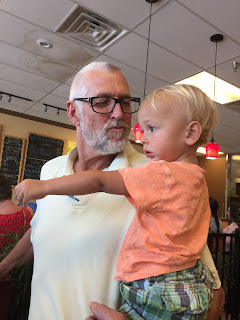 August was reaching out for his daddy who was ahead of us in line and his grandfather said, "You don't need your daddy. Give me a kiss.
And the boy did. 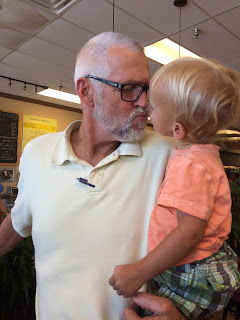 We finally all got our food and it was delicious, falafels and grape leaves and gyros and hummus and wraps and tabbouleh but by that time I was a tattering rag of agitation which is ridiculous but there you go. My ridiculousness knows no bounds.
But it was all worth it to witness one of the sweetest things I've ever seen.
August was sitting on Vergil's lap and he was being a little fussy because he was tired and Maggie was on Jessie's lap right beside them. I offered August a piece of the delicious pita bread which had been part of my meal and he didn't want it and I asked Maggie if she'd like it. She took the bread and without even tasting it, laid it on August's lap. He picked it up and dipped it into his mama's tzatziki and took a bite, dipped it in the tzatziki again and offered it to Maggie who somberly accepted it.
It made me want to cry, those serious, sharing baby cousins.

And so it went and so it was and there were probably ten thousand hugs and kisses before it was all over.

I drove home and you won't believe what I saw.
A dinosaur crossing Apalachee Parkway. 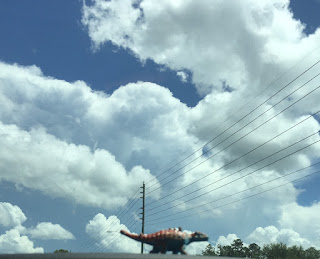 Okay, okay. Not really.
When I was trying to get some of the trash out of my car the other day, I found this dinosaur under a seat. 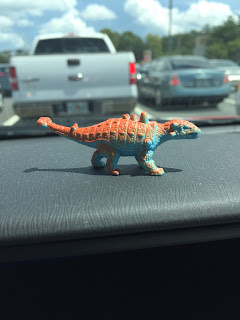 He charmed me so I put him on the dashboard. I don't know why that picture with the clouds cracks me up so much but it surely does.
I'm a simple woman.
Who had to come home and take a nap after the incredibly stressful experience of having lunch with some of her children and grandchildren.

Well, I can see by the activities of the chickens that it is fuck-thirty which means it's just about time for that Friday martini.

I raise my glass to you.