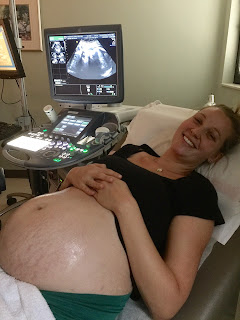 What a day. We went to the ultrasound place and a very, very quiet tech began the procedure and showed us the heart and the spine and the feet and the hands and all of those parts which are so very important for a baby to have but of course, she being the tech, couldn't make the final decree on how things looked. She did say that the placenta was far away from the cervix which was terrific, and that the little guy is head down for now, at least. Then the doctor came in. Oh my goodness! He was so ebullient! He shook all of our hands and introduced himself and got right to work. He would say, "There's your sweet little baby's heart!" and "There's that wonderful brain!" He was so excited! It was beautiful. He said everything looked perfect. "You have a sweet, wonderful baby!" he said before he left, and then he shook all of our hands again, including August's and we all felt cheerful and grateful. You can see it on Jessie's face.
August of course had no idea what he was looking at but he was very patient and very good and very quiet. He and his dad sat and ate goldfish crackers and watched the proceedings just as if they were at the movies eating popcorn and watching a serious film. 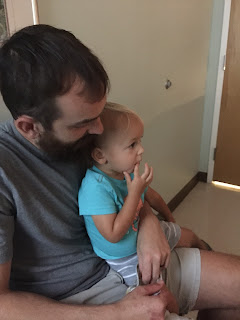 Then we went back to Jessie and Vergil's house and ate soup which was delicious, and then Diana, the midwife came and all was well with that appointment.
Except...Jessie went into the dining area to get her water and kicked a piece of furniture by accident and broke her toe. She didn't even curse. Probably because Diana was there although Diana is one of those people for whom some well-placed profanity would not be offensive.
But honestly- poor Jessie.
Vergil got her an ice bag and snugged it to her foot with an Ace bandage. He's such a good husband. But I felt terrible for her.

So that's mostly been my day although I did do some ironing while watching a little crap TV when I got home and I'm mighty glad that I got to go and see that little baby although mostly he looked like a sea creature. I think his forehead reminds me of August's. Jessie says the nose is cute.
I am sure that it is.

Here's a picture of Maggie I stole off of Facebook because I know we all miss that little cherub. 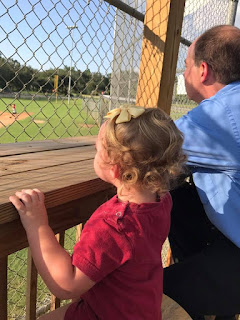 She was standing by her daddy watching Owen at baseball practice. Those curls.
Sigh.

I feel extremely wealthy in grandchildren tonight. And most everything else as well. Definitely eggs. My lovely hens gave me seven today with colors ranging from blue to green to brown to ivory to white.
Oh hell, here's a picture with Maurice as lagniappe. 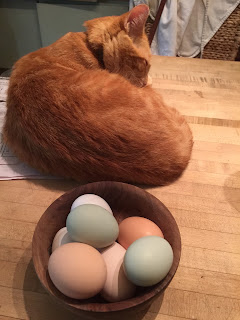 I am very rich woman.