Well, we still don't have power but that's all right. We have the generator and we have water and we also have the phone line back which means that we can access the internet which is good because I was feeling lost and bereft.
I hate to admit that but it's true.
Our company left early this morning and made it home to Tampa. They have power but a lot of people down there don't.
Everything in Florida is down to that right now- Do you have power?
I picked up some branches this afternoon and hauled them to the burn pile and then strolled to the end of the block to see if I could see any Duke Energy repair trucks glowing like holy things on the road, but I did not. Mr. Moon saw some on his way home from town.
When I was walking back, a woman in a truck stopped and said to me, "You got power?"
"No m'am," I told her. "Do you?"
"No. I live in Monticello. My son in Tallahassee just got his back on."
"That's good. Did you get any damage?"
"Nah, just a few branches down. Everyone saying that storm was gonna be so bad. It just wasn't."
"I know. It was crazy."
"Everyone going crazy," she said. "They need to trust in GOD!" She pointed to the ceiling of the truck. "The man upstairs!"
"That's right!" I said with all of the unbridled enthusiasm of a river-baptized, five-nights-a-week-church-going BELIEVING woman.
What the fuck ever.
Tell that to St. Martin.
I guess we just have real good prayers here in the Florida Panhandle.

We did all freak out but fuck if they weren't telling us to. Except for one local meteorologist named Rob Nucatolo. I came to love that man. He does FB chats and the weather on a local channel and he'd say things like, "Look, they keep saying we're going to get hurricane force winds and massive flooding up here and it's just not going to happen. If you want to get all freaked out, go up a few channels. They'll be glad to help you."
Then he'd discuss things like SCIENCE and PHYSICS and tell everyone to calm down.
I wanted to believe him with all of my heart.
And he was right.
He was right about where the storm was going to go and who would be affected and how. He didn't make light of anything but he just told what he, as a long-time meteorologist foresaw happening.
He helped me for sure.

Anyway. Shit. I've got the blues for some reason and I have no right to them at all. We had no real damage and I didn't even lose sleep. We ate like royalty and our freezer full of stuff is absolutely fine. The temperature is mild. I have running water! I don't have hot water but so what? I turn on the faucet and it comes out! Water! I have internet! I have about a thousand branches to pick up but that's no big deal. I even went to town and got to hang out with Jessie and August and then we went to lunch with one of her housemates and Lily and Owen and Gibson and Maggie.
I took pictures but they all suck.
So why am I feeling this way? I have no idea.
Adrenalin-drain hangover?
We sure were pumped up for about a week beforehand. Irma took over our LIVES! Our highways were filled with evacuees. Our town was filled with evacuees. We bought everything on the shelves at Publix and Costco. We prepared and then we prepared some more. We boarded windows and cleared the yard. We put mattresses in hallways. We watched the Weather Channel incessantly. We checked Irma's progress and the forecasts online like we were being payed by the hit. We cut down trees and trimmed branches. We drained the entire state of available gasoline and canned ravioli.

But. It's so much better to be over-prepared than it is to be under-prepared. And there were parts of the state hit hard and it's going to be a long time before things are anywhere near back to normal. 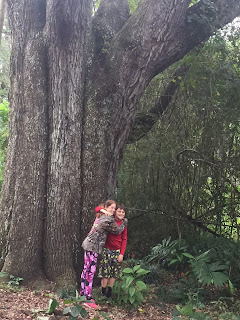 That's them, Grace and Cam in front of the big oak in our front yard. They really are that affectionate and loving towards each other. Cam asked if they could take home some of the eggs they'd gathered and I told him of course and packed them all up for the trip to Tampa. He wanted to show his daddy.
Their parents have done so well with them.

And speaking of chickens, they're all fine. If Dottie was a mammal, I'd say she's weaned her babies. She's pretty much completely disconnected from them and it seems as if the transition has been painless. She's a very fine mother.

So that's the news from Lloyd where I can't complain but somehow do anyway.