Freak or Fly? Who Knows? But Here We Are

This whole storm-watch thing is maddening. We pin our hopes and our plans on one forecast track and then, a few hours later, the computer models show a different track. One which has us thinking about evacuation again, or at least more preparation.
Florida is running short on gas. Many stores run out of bottled water the second they unload the truck. This sort of disturbs me. What's wrong with tap water? I am filling up juice bottles and freezing them and whatever else plastic bottles I can find to wash out and clean. They will help the freezer stay colder longer should we lose power for days and when they thaw, we can drink them if need be. You can be damn sure that I'll be filling up the bathtubs. Flushing toilets without running water is a problem and quite frankly, one I'd like to have a solution for that doesn't involve bottled water.
We've got plenty of food and I'll just lock the chickens up in the coop if it comes to that. It's pretty sturdy and for that, I am grateful to Mr. Moon. There are things in the yard which should be tucked away somewhere but some of them are just too big for any space we have. A few vehicles and a boat, for sure.
I hear the highways are filling up with traffic and when I came home from town today the westbound lane of I-10 was notably busier than the eastbound.
I need to move my porch plants. I'm not sure where. I guess back to the wall of the porch. A few of the lighter ones probably need to come in.
And all of this depends on...the forecast.

Meanwhile, as I keep saying, life goes on.
I had to get my teeth cleaned this morning and although I dreamed last night that I missed my appointment and then could not find my phone nor remember the name of my dentist, I made it there with plenty of time to spare and remembered my dentist's name easily and my hygienist's too.
That was just one more little anxiety trigger but I survived and my teeth are fine.
After that I met Jessie and August for lunch at the buffet which has everything from curries to fried rice and one freezer with desserts and one refrigerator with desserts. August enjoyed everything today and he wanted Jello for his dessert. He'd never had Jello before. Never even seen Jello before, so we were interested to see what he did with it.
He poked his finger in it mostly. That made him happy. What a fun food! 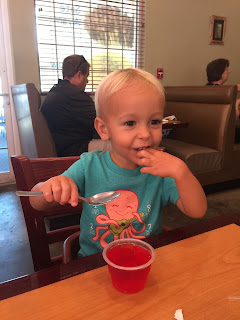 He didn't really like the taste so much, though, and didn't eat much of it. He much preferred the miniature cheesecakes which are the size of a candy.
The boy has good taste.

After lunch I went across the road to the Goodwill which I have not done for a long time. I got some nice things including lace curtains for Lily, a shirt that might do for Jessie after her baby is born, soft and easily nursey accessible. I found a braided rug and some beautiful placemats which inspired me to throw out some of my oldest ones. I also got a nice linen dress and a small leather bag which I looked up online and which you can buy new, now, for almost two hundred dollars and I paid nine. It's obviously been used but not abused and I rather love it.

And so overall, it's been a good day and even the temperature and humidity have been a lot more comfortable but in a way, that only adds to the feeling of things not quite being real. It's as if we are caught here in some land between knowing and not-knowing, action and in-action, paradise and terrifying hell. They're saying that until Saturday morning, we really won't know for sure where this storm is going.
And even then...

I wish we had more flashlights but forget finding a one on the shelves around here. Some lamp oil would be good for my lanterns but again...it's all been sold. And thus, we shall just make do as needs must.

Here. Look at this. 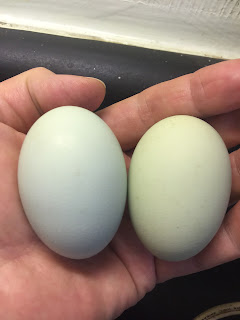 A blue egg to go with the green one I got yesterday. Owl and Lucy are in business.