The birthday party couldn't have been better. We had it at a cozy park with a play ground and tables and benches and lots of shade and not too many people came but the ones who did were really nice. I think that August had a good time and that is the most important thing, of course.

He kept telling Boppy and me to sit beside him with that little pat-pat he does on the seat and so we do, of course. He knows how much we love him. He delights in it. He returns it. 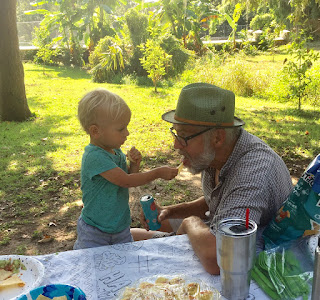 He is a generous boy and always remembers to put dip on the chip (in this case guacamole and salsa) before he serves it. He sang the birthday song again and loved it when we sang to him and he was very serious about blowing out the candles and he did a good job. 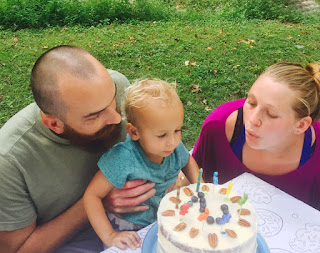 Jessie made him a delicious hummingbird cake. It was the second cake she made this week, having made a chocolate stout cake for Lily and Vergil which was beyond amazing. I look at her life and at Lily's life and all the things they do for their families and their children and I wonder how in the world they do it and then I think, how did I do it? How does anyone do it?
But I will tell you- there is doing it and there is doing it with grace and Lily and Jessie do it with such grace.

August got wonderful presents. Books and tools, mostly which are two of his favorite things in the world. 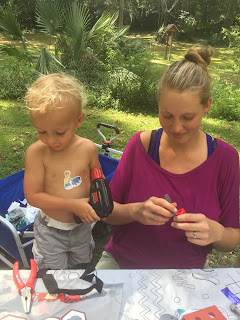 I got him a doll house thing that I saw in Target and which I've been dying to give him. I think it's genius. It has four doors that lock and real keys with which to unlock them. Each door has a number which goes with its key and each door has a different doorbell. AND there are four little rag dolls to go into the four rooms of the house. So. Mechanical skills, number learning, doll play. And doorbells! What could be better?
I think he liked it. 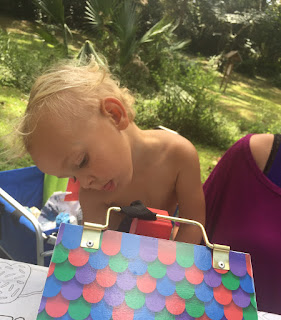 Of course Lily and Jason and Owen and Gibson and Magnolia were there. And Shayla and Waylon and a couple who are friends of Jessie and Vergil's who had a darling baby named Cordelia. The guy looked so familiar but it wasn't until Jessie pointed out that he works at the library where I have seen him about one million times that I realized why. And some other nice folks too. There were bubbles and playing with balls and swinging and sliding and monkey bars and snacks and pizza and all-in-all, it was a perfect two-year-old birthday party.
Here's what happened when Maggie tried to hug August good-bye. 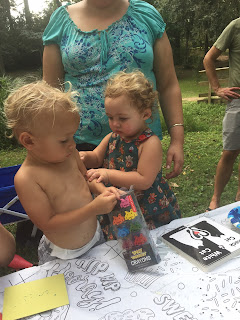 He really was not in the mood and had more important things to attend to. Poor Maggie. Her other little boy love won't let her kiss him at all any more.
Men.
They'll break your heart.

After almost everyone had left August looked around and then at me and said, "Birthday go?"

Ah well, little man, you'll get another one next year.

And then we came home and I almost finished clearing the garden so that Mr. Moon can till it so that I can plant it and that is my goal for next week.

All right. The Grand Week of Birthdays is over and it's time to cook the supper.
Tonight we are having more red snapper with coleslaw and I don't even know. I'll figure it out when I get in the kitchen.