Agitato For No Reason

Do you like the new header? I hope so. I was so weary of the old one but couldn't focus on what I wanted to replace it with. But, as things do go on the Google, one rabbit hole leads to another and I started searching images of paintings by the Highwaymen, which I love, and that one called to me. The artist's name is Robert L. Lewis. You can read about him HERE.
I noted the fact that he is from Cocoa Beach which is a bit north of Roseland and that he grew up on the Indian River and of course, that's why the picture called to me.

I am agitated this evening. I am not sure why, but Mr. Moon just saved my sanity by finding  my ginger root in the freezer for me. I was about to start throwing frozen berries and sausage and mango puree across the kitchen. I am not kidding. Bless him.
I had a good day. I met Jessie and Levon (August was in school) in town and we went to the nursery to buy plants and seeds. And we were cold! It got down to the mid-forties here as was predicted and never got higher than sixty-something which is damn chilly for us. We all had a good time though, especially Levon because he got to pull a wagon AND push a toy wheelbarrow. 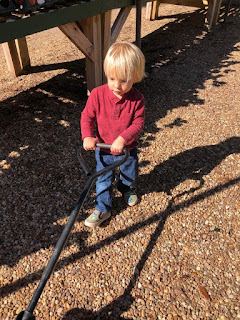 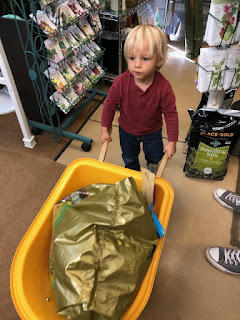 The boy is such a...boy.
He just is. Call me a sexist, I don't care. I'm here to tell you that I've never seen a little girl want to do the things that Levon is most happy doing. Or, to be honest, is obsessed with. He even found bricks to put in the wagon because that would make the pulling of the wagon a more productive endeavor. Well, he didn't say that but I know it's true. He also loaded up that wheelbarrow with various things. His mama ended up buying him a nice little shovel which he employed in the task of shoveling gravel onto the walkways while we were waiting to check out. Jessie tells me that he loves to shovel chicken shit off the pathways in their yard.
He is a helpful little man.
So we bought some plants. I got some cabbages and broccoli because I'm an eternal optimist. We also bought seeds. I got collards, mustards, mesclun mixed lettuces, Bok Choy, carrots, arugula, and radishes. Maybe more. I can't remember. When I got home I threw away all of the old seeds.
Good-bye!

I had reached my limit with not seeing my daughter May and so Lily and Maggie met me at Midtown Pizza where she works and we had our lunch there. God, it was good to see her. May is just too much like me and when she's not working, she likes to be at home in her cozy nest with her husband and since she's working at lunchtimes, she hardly ever gets to participate in our big group lunches.
Hugs and hugs and hugs. My heart took a deep breath of relief.
And Maggie was happy. She ate her pizza and talked like a grown-up and was quite well-behaved. We discussed Halloween and things like that.
Here she is, doing what her brother Gibson does, which is to take all of the shakers on the table and make a family of them and create little stories for them to act out. 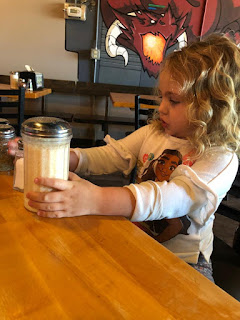 I just love this. She and Gibson are very imaginative.

When I got home I tended to my latest sourdough. I experimented a bit more with this one, making up the dough last night and then putting it in the refrigerator. This one is all white flour (a sin! a sin!) and for some reason, I wanted to try mixing in some yogurt with it. I took it out of the refrigerator as soon as I got up this morning and when I got home this afternoon, it hadn't risen much. Of course it was sixty-degrees in the house so I set about putting the proofing bowl in warm water and then in a slightly warmed oven, etc.
It is now baking and looks like it's going to be fine.
I am learning.
I am also making my favorite squash/sweet potato/cashew/coconut soup. That's what I needed the ginger for. This is the recipe that got me so interested in the NYT's cooking app.
Soup will be good. It's going to get down in the forties tonight and guess what?
I turned the heat on and, as happens EVERY FUCKING YEAR it isn't working.
Nope. Not working.

We will not freeze. We have gas logs in the rooms we mostly inhabit and a full tank of propane. Last night I got the duck out of the closet where it had spent the winter smushed up in a plastic bag and shook it out and laid it on the bed. Heaven. For those of you who are new here, "the duck" is my down comforter. Also, I have my corduroy overalls and my Goodwill cashmere. The moths have apparently been dining on the cashmere all summer so I look even more raggedy than ever but I just don't care. I am warm. I am cozy. My husband still seems to love me.

The folks are arriving at the church next door. The sun has set. I have a martini in front of me. Perhaps I shall de-agitate.

And look at this: 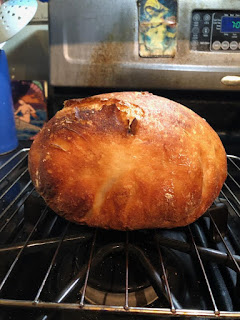 That looks edible.
Now that bread is my life I need to get a bread knife like the ones on The Great British Bake-Off and also one of those razor-holders so that I can score my bread. I just looked that up and they are called Bread Lames. I think some of you have told me about them.

Did you see that DT is going to make Florida his official residence?
Sweet baby Jesus. Just what we need.
Well, he'll start at the very top in the Florida Man Contest.
And I'm here to spread the word that Florida is not ALL hurricanes and pythons and meth addicts attacking their girlfriends with alligators. At least for now we still have beautiful wild places and even vast areas of undeveloped areas where humans rarely go.
Did you know that the Mormons now own 2% of Florida's land?
Yeah. They do.

Sometimes I'm just really glad to know that I won't be around to see the very last of what this once-magical place becomes.
Until then, I'll be right here, cussin' and fussin' about it all and enjoying the parts of it that are still virtually untouched and unspoiled.