Links And Links And Bread Baking And Mushy Peas And Climate Change And, And, And... 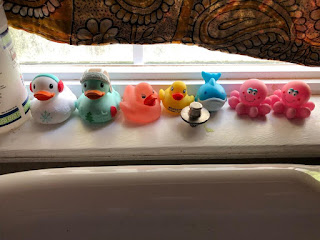 I'm pretty sure that Miss Magnolia June lined the tub toys up like this the other day. I hadn't noticed it but when I went into the bathroom this morning the little ducks and whale and octopi were shining in the sliver of sun from beneath the curtain and caught my eye and pleased me.

I slept so long this morning that I'm embarrassed. I think the holiday has really taken it out of me. When I woke up, I was having a terrible dream about driving in an old VW in the dark and it had no lights and I was lost and I had kids with me and when I saw police officers I pulled over and said, "Thank god you're here."
Which is something I've never said in a dream before to police. Trust me.
I was just figuring out that it must be a dream because I was trying to use my phone and when I'm dreaming and trying to use my phone I never can. Oh, how I wish this was a dream, I thought. There was also an issue with how I was going to support my children.
I dream that a lot- that I have no idea how I'm going to feed and house my babies.
It's stressful, that dream. To say the least.

So it took me quite awhile to truly wake up this morning. Mr. Moon had gotten up a long time before me to go hunting and I had two texts already. One from him with a picture of the woods in the early morning and one from Jessie telling me that they were going to go to St. Augustine for two nights. A little mini-vacation. St. Augustine is a beautiful place to go. There are plenty of touristy things to do and see and it's a charming town on it's own. There's a fort and the oldest house and Ripley's Believe or Not museum and also, the beach. There are excellent restaurants and giant old trees and the Alligator Farm and the Lightner Museum. Something for everyone in the family. And tomorrow night, Jessie's fairy godparents will be playing at the Creekside Dinery there which is child-friendly and an outdoor venue and I'm sure they're going to have a wonderful time.
I've spent a lot of time in St. Augustine because Lon and Lis used to live there before they moved to Gatorbone. Some of my favorite and best memories are from those times. There is a sort of magic to the old town and I've always been extremely susceptible to its charms.
It never hurt that being friends with Lon and Lis was like holding an enchanted golden key to the city and I doubt I've ever felt more welcomed into a community than to the beautiful one there. For years I'd take Jessie and Lily over for the annual Gamble Rogers music festival when they were just little girls and I'd volunteer in the hospitality tent (which of course Lis ran, even as she performed in many various bands) and do what I do best which is to cook and serve and stay out of the way but I made a lot of friends doing that and the last year that I think we went, Lily was already grown up and Jessie was in high school and I took her and some friends of hers and they had the best time ever, listening and jamming with musicians because by then they were all playing music themselves.
So yes. I have the most fabulous associations with St. Augustine.

I finished the greens-thinning today and now have enough of those and some still-growing, late-crop arugula to make a beautiful salad which I will do tomorrow night. Last night's soup and sourdough will be our supper tonight. Karen and David did eat with us and although I think they liked the soup, it was the bread (right out of the oven) that everyone loved.
I've been using the simplest recipe to make my bread and it always seems to come out very nicely. I usually mix up the dough the night before I want to bake it but yesterday I actually made it up in the morning and coddled it a bit on the warm setting of a heating pad with a towel over it to hasten the whole process and it worked fine. This afternoon I decided to search for other recipes to expand my repertoire, as it were, and I've about decided that the recipe I've been using is good enough for me. Especially after reading through all of THIS recipe with instructions. For god's sake! If I want bread on Wednesday I have to start preparing it on Sunday! There is information there about "scalding" flour and all kinds of different steps to follow for what I would hope is the very best bread in the world, sourdough or not.
One commenter said: "THIS is one of the longest most ridiculous most complicated recipes I've ever heard."
Amen.
I could no more follow all of those steps than I could walk into a room, take the New York Bar Exam and pass it tomorrow.
Nope. Not for me. Thank you very much. I want to love baking bread, not turn it into a science experiment requiring various thermometers, exotic equipment, and three damn days.

Besides working in the garden I went to Publix today. For some reason I decided it was something I really needed to do. That was relatively painless and while I was there, looking for a bottle of HP sauce (thank-you, Mr. P- I have developed a fondness for it) in the international foods section, I happened upon these: 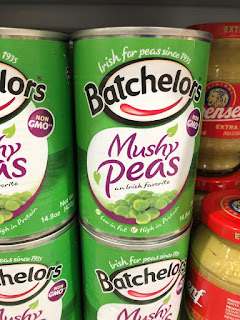 I've heard of "mushy peas" many times before but have never, ever had the desire to eat any. They may be the most delicious things in the world but with that name, they're never going to be big in the States. I was quite pleased, though, to see that Publix carries them now. I mean, you never  know- I may want to try some and if I do, well, they're as close as my nearest Publix. 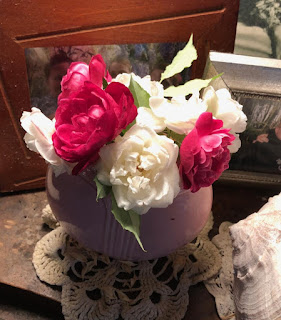 Because we are not really having winter here anymore, my roses just bloom and bloom.
One may think this is a good thing but it's not. The natural order of things has been disrupted in the most obvious ways. The Japanese Magnolias are already blooming and they should wait until at least February or March. The camellias are starting to open up and that is as should be but to have those and roses blooming at the same time in winter is simply not right.
Still, I could not pass up the opportunity to stop on my way out of the garden to pick a few of the roses, pinching their stems between my fingernails, and bringing them in to put into a vase.
I suppose I'll get around to pruning them before spring at some point.
Meanwhile, I am hoping for a good freeze to knock things back to where they should be, despite the fact that I'll have to do something about my porch plants. It's just all too weird.

Well, may we all have sweet dreams tonight, none of which involve the police or worries about how we are going to feed our children.