The Joy Of A Very Normal Day 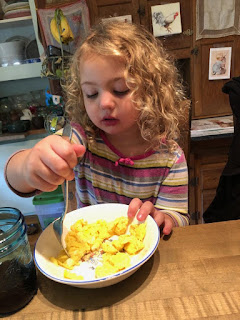 I got a lot done today including another walk and by the time Magnolia got here a little after 1:00, I'd made the chili for tonight's supper and gotten most of my chores done so that I could indulge my granddaughter and I pretty much did.
For all of her strong-headedness, she is actually pretty dang easy to take care of. Especially if you do everything she wants you to do. She wanted to go look for eggs and she wanted to lay on the bed and read books and cuddle with Jack. She adores Jack. She wanted me to cook her an egg and so I did.
"Here's your egg," I said.
"Not now," she told me. "I want to go outside."
And so she went out to the back yard and checked things out there and then came back and asked if her egg was cool enough to eat yet and it was. She ate every morsel. That girl loves a scrambled egg. She wanted to sit on the porch swing and so we did that too. I brought my hairbrush because I was making my way to being ready to take her into town to hand her off to her mama at the movie theater and go to an appointment with Mr. Moon and she asked if she could brush my hair.
"Of course!" I told her.
"What do you want to look like?" she asked, brush in hand.
"I want to look like you because you're beautiful," I said.
"No. Rapunzel," she said after studying me carefully. And then- "No, Elsa!"
Fine by me.
She brushed my hair for awhile and then announced that I was ready.

We got in the car to leave and she said, "Wait! Can I take my baby home with me?"
"Sure. Which baby do you want?"
"You stay here," she said, "And I will go pick her."
"Okay. But hurry."
And she did. She scurried into the house and brought out an American Girl doll that had been Lily's if I remember correctly and she buckled her into a seatbelt and got back in her seat and then she herself was buckled up and I got in my seat and she reminded me to buckle up and so I did.

Then I drove to the hospital where Mr. Moon's in-town neurologist has his office and met my man there. The appointment was with the doctor's nurse practitioner whom I like a lot and we were supposed to be going over the results from Mayo but of course Mayo hasn't sent over a damn thing so mainly we just told the NP what we knew and how it had gone and she asked a few questions and that was that.

Jessie and Vergil are getting their windows replaced this week and I had told Jessie that she could hang out at my house if they wanted while this process was going on this afternoon. She said that sounded good and I told her to make herself at home and that she knew where everything was AND there were muffins in the refrigerator. I got this picture. I ran by the store on the way home and when I got here, they were watching "Daniel Tiger" on the TV and eating popcorn. Mer's house is fun. Well, Mer and Bop's house. They left though, soon after I got home and right after Mr. Moon got home. He'd stopped by Bass Pro World to buy some gloves. Supposedly it's going to be somewhere around zero degrees up there in Canada. I told him that if his feet freeze off he won't have to worry about whatever it is that's wrong with him. I don't think he found that to be very funny.

And so that's what's going on here. It's thundering off in the distance and and we've gotten approximately eighteen rain drops. It's back up in the high seventies again and hit eighty-something today. At least the lack of heating isn't a problem at the moment. It's muggy as hell. A guy is going to come by tomorrow to see what's wrong with the damn unit because it's supposed to get down into the thirties here before Mr. Moon gets back.
For whatever reason I've had almost no anxiety today. Even the usually terrifying prospect of not only driving by the hospital but actually driving to it, parking in the parking garage and entering it didn't cause me much angst.
I hear that Owen's appointment with his neurologist in Jacksonville (not Mayo, Nemours Children's Hospital) went well. They want to wait until he's had no seizure activity for two years before they start to wean him off his meds to see how that goes and that will be in January.
I feel like we are so lucky there.
I think back on when he was having seizures before he got on medication and I can barely stand to hold the memories in my mind. Just so frightening. I may even have a bit of PTSD about it and yet, it was all so mild compared to what some people go through. Nothing. Not the tiniest fingernail clipping of a pinkie finger of a scare. Parents and grandparents who have children whose seizures are far more severe and often impossible to control have CTSD which is Continuous Tramatic Stress Disorder as I have learned from our Elizabeth.
And that's a whole other reality.
So yes, we are lucky and so is Owen.

The knee that I thought was about to blow out is not looking good. Lots of swelling all the way around it. Some pain. Not too much, though. That knee has gone in and out for decades but it hasn't really bothered me in a very long time. I'm going to rest it tomorrow, as in not take a walk, and just not worry about it.

Isn't it funny how some days even the tiniest thing can set anxiety off to a roaring level ten while on other days, it's all just...okay.
The days where parking in a hospital parking garage isn't a ridiculously impossible task. The days when the sight of one car letting another car into traffic is enough to make you have hope for the human race. The days when a busy schedule doesn't make a person want to crawl in bed and weep. The days when a notice from the library that a book you had on hold is in can bring you great satisfaction.
Today was one of those good days.

Time to go make the cornbread to go with the chili.
And the thought of that makes me happy too.

I hope you've had a good day. We all deserve one now and then, at least.