I Still Have A Give-A-Damn Meter, I Guess. And Other Stuff 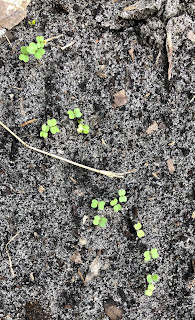 Well. There you go. The arugula has come up after only four days. No wonder you people in GB call it "rocket." It grows like one.

It's been another good day although quite a different one. I decided this morning to try and stay off my knee as much as possible and I also found my old knee brace and Velcroed it in place. Not sure if the thing helps at all but it does serve as a reminder to be gentle on the old joint.
Jessie has offered to make me a doctor's appointment to get it checked out.
I told her, "As Maggie would say, 'No, please'."

So I've stayed close to home although I did take a beautiful little stroll up to the Post Office, enjoying the cooler air, the fallen pink sasangua petals on the sidewalk, the blue skies with the ancient oaks reaching up to try and touch them.

The heating repair guy came out. He was the most polite fellow ever. There was a m'am after everything he said to me and when he talked on the phone to Mr. Moon, a sir.
I know that bothers some people but around here, it's just a sign of good home-raising. And respect. Hell yes, I may not be elderly but I'm olderly.
He got the heater to come on and then he checked out all of the air vents in the house and then went under the house because Mr. Moon has asked for an estimate to get all of the ductwork replaced under there.
Let me just say that if you throw in a new heat pump, we're talking approximately the same amount of money my parents paid for a house on a lake in Winter Haven, Florida in 1967.
Oh god. I DO sound elderly.
Yes. Times have changed. So have prices.
But it was not an unpleasant exchange with Repair Guy and when he left I told him, "If I was your boss, I'd be really happy to have you as an employee."
I think he appreciated that. Of course, he could be a serial killer but I sort of doubt it.

I did laundry and cleaned out the hen house and finally sat my ass on the couch about 4:00. So much for staying off my knee. I got back to my overall embroidery project while watching a documentary on Netflix called "Echo in the Canyon." For someone my age, it's extremely enjoyable. All sorts of musicians who started out in California and specifically Laurel Canyon are in it as well as Tom Petty (whom the film is dedicated to) and Ringo Starr and Eric Clapton. Also, Jakob Dylan, who is sort of the thread who stitches it all together. He is the interviewer of the people like Stephen Stills and David Crosby and Michelle Phillips and Lou Adler. I haven't finished watching it but I have determined that the trait of being enigmatic is surely genetic after carefully studying Jakob's face as he goes about his interviewing and his playing. He looks and sounds a lot like his famous daddy and he ain't giving away any more of himself than Bob does. And quite frankly, he has a most interesting (and to my mind) beautiful face to watch. 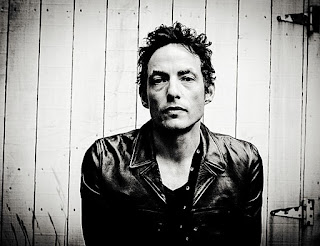 I love the way several of the older musicians who were interviewed put their hands on Jakob's neck or shoulder. He is one of the children of a man who meant, and probably still means, a lot to them all. And he has grown up to be one of them- a musician in his own right.

Mr. Moon is home and he's all packed up and ready to leave which will happen about two a.m. He has a five o'clock flight tomorrow morning and he has to get to Tallahassee and park and get an Uber to the airport in time to be early enough to get all checked in.
I am not envious of that at all.
I am going to miss him so very much but I'm already planning projects to do while he's gone. I want to get a pattern and flannel to make Maggie and August matching winter dresses. I had Jessie ask the boy whether he'd rather have pants that matched Maggie's dress or a dress for himself and he said he wants a dress. How I love that boy! And his mama and daddy for not having the slightest problem with that.

I've got yet another loaf of sourdough in the oven and I'm going to make a seared scallops and greens and tomatoes pasta thing for my husband's last night at home for awhile.

Okay- here's a question- why is it that you never see all the dust and spider webs until a stranger comes to your house? As the heater guy went from room to room measuring vents and so forth I was horrified to see the amount of dust AND spider webs as he shone his flashlight about to count and measure. And also- why do we feel the need to point these things out and apologize?
Who cares what a heat tech guy thinks?
I guess I do.
Which means I still have a few fucks left to give.
Dammit.