Things My Life Is Made Of 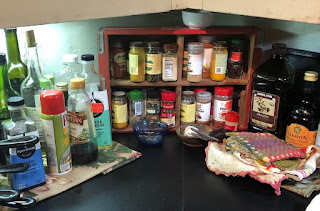 Last night I decided to reorganize the counter area to the left of my stove. No. That is not the before picture. That is the after picture. Trust me. It's a lot tidier than it was. I just have many spices and oils and vinegars and cooking wine. I have more spices in the cabinet above the stove and the mostly baking spices are on some funky built-in shelves nearby.
Also some in the freezer but we needn't dwell on this.
This story is leading to Maurice being a happier cat. I'd been keeping all of those oils and vinegars and cooking wine in a rectangular basket to keep them organized but it wasn't pleasing me anymore so I set it on the kitchen island while I was lining up bottles and when I turned around, this had happened. 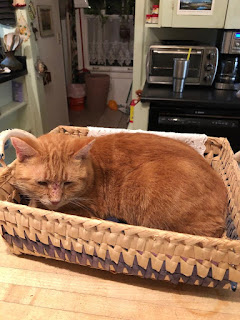 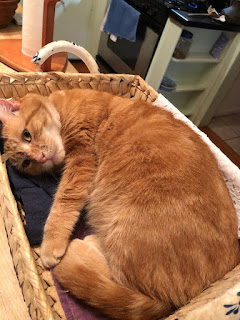 Trying it on for fit, I believe.
Finally, the inevitable. 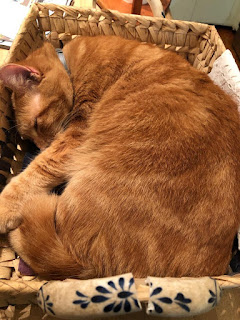 She was in there when I went to bed and she was in there when I got up this morning.
She is in there now.
I believe she feels safe in that basket. We all know how cats love to snuggle into small enclosed places and spaces and so Maurice has done that. I've put a cozy blanket in the bottom of the basket now to make her more comfortable. Of course. Because she is my baby, albeit a scratchy baby. A bitey, scratchy baby.
Whom I love.

Speaking of babies- this morning Jessie texted Lily and me to see what we were doing. Levon and August have had colds all week and are snorty and snotty and August has a cough. They've been stuck in the house all week long for the most part and Jessie was desperate to get out of the house. Lily had errands to run but I told Jess to bring the boys out here and Maggie, too, if she wanted. Jason is out of town this week for work training and so Lily's been holding down the fort by herself. Plus, it's just so fun to have the three littles together.

So. Out they came. I was ready for some sweet company.
The first thing I did was to show Maggie her dress and ask her if she would try it on for me. She did not want to try it on. She wanted to hold it up in front of her to check to see if I'd gotten the correct size.
"It fits!" she said when she got it all straightened out and properly aligned.
"Do you want to put it on?" I asked.
"No," she said.
Well, okay.
I asked August if he would like to try his dress on. I still had some pocket decorating to do but I wanted to see if his fit him. Instead of answering at all, he merely walked out of the room to go find out where Magnolia had gone. Levon, however, was standing there.
"I try," he said.
"You want to put on the dress?" I asked.
"Yes," he said. And he wore it the entire time they were here. 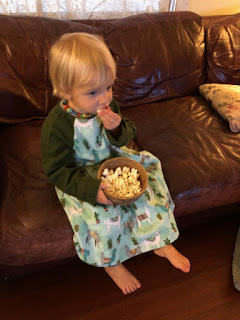 It's rather large on him but fit doesn't really matter with a dress like that and he likes it so much that instead of making matching pants to go with Maggie and August's dresses, I think I'll just use the rest of the fabric to make Levon a dress in a size smaller than the one he's wearing there. It's such a simple pattern.

The kids got along great. Mostly they loved playing hide-n-seek which is pretty fun in this old rambly house. They use Boppy's flashlight and for once, I didn't hear one bit of arguing about whose turn it was to use the flashlight. We also had another tea party. 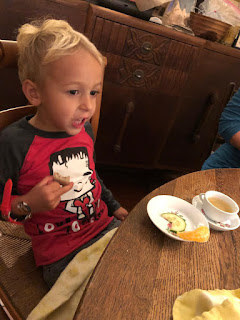 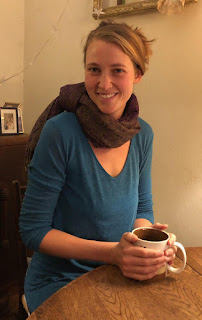 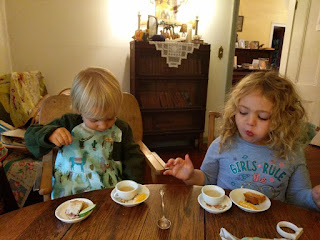 There were cucumber slices, small thin peanut butter and jelly sandwiches, cut up tomatoes and a nice Florida tangerine. There was SO much stirring of honey and milk.

There was a little bead necklace making going on for awhile. And finally, after bringing it up about twenty times, August was allowed to watch some TV. Jessie made popcorn and they so happily munched and watched a kid show. 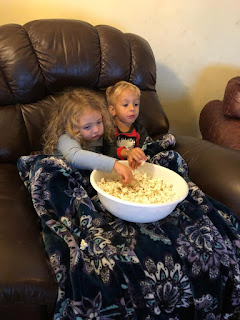 Just as it as time to go, the children decided it was toy time and Jessie and I sighed and let them play with some little play houses and rabbits and mice. They set up the houses and I heard August say to Maggie while holding up one of the rabbits, "Hi! I'm your neighbor."
Which was so beautiful in some way that I can't define.
I also heard Maggie say, "Quit decorating my house!" Which I totally can define and also understand.
Then out came the front-end loader that Kathleen got for Owen about nine years ago and they played with it in the hallway, making it go through their legs. 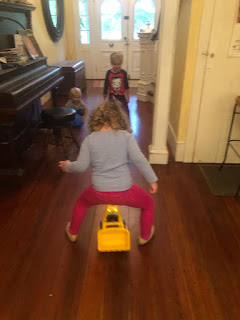 Sorry for the blurry picture.

Finally, finally, Jessie got everything packed up and everyone got their shoes back on (Maggie had worn hers the entire time she was here but for some unknown reason took them off right before it was time to go) and we got them all buckled into their seats and I gave them each their going-away treat and off they went.
I almost needed a nap. But instead, I tidied up and swept popcorn off the floor and finished some laundry and took the trash and went to the post office. And then I sat down to do a little embroidery on August's pocket and watched a documentary on Netflix about Clarence Clemons (Who Do I Think I Am?) which I've been looking forward to. I have loved Clarence Clemons since my first Bruce Springsteen concert which was in 1979, I believe, or thereabouts. He was (and oh god, this is so pathetic) the fucking SOUL of the E-Street Band. He was a god on that stage and the affection and respect between him and Bruce was impossible not to see. He was the Big Man.
I wrote a post about Clarence and his place in the band ten years ago. You can read it HERE.
The picture I posted with it is this one. 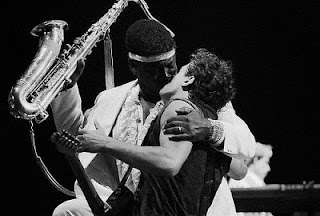 And that's what Bruce and Clarence did onstage for decades. Bruce would slide down the length of the stage, end up right beside Clarence, and offer his face up to that Big Man and Clarence would take him into a one-armed embrace and baby, they kissed.

Phew.
I believe I may be having the vapors.

I see I misspelled Clarence every time there. Oh well.
So anyway, I wanted to see this doc. And it was fine. I cried. But I felt like it only portrayed a sliver of who Clarence Clemmons really was. There were moments of deep beauty in it- mostly the ones where the camera was on his face as he listened to music. He had one of those faces like Maya Angelou's. A face that was the absolute portrait of everything a human can go through as well as his or her ancestor's histories as well. All right there.
One of the people interviewed in the film said that Clarence always added "Love Lives" to the end of everything he signed.
And although the documentary wasn't everything I hoped it would be, that fact alone made it worth watching.

I hear he was also fond of the saying, "Order the good wine."

I raise my martini glass to that.