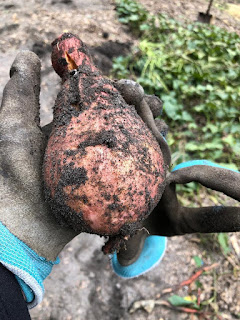 That was the biggest sweet potato I found today. It and its root vegetable relatives that I pulled up and dug out of the garden are curing on a sheet of newspaper on the porch. 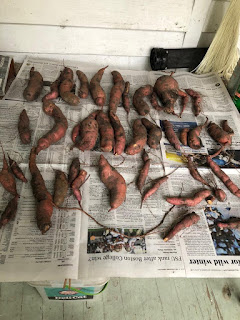 That is a pretty pathetic harvest and some of them are tiny but they'll be good in soups. I have a feeling that I missed a whole bunch of them because I really don't know what I'm doing when it comes to digging sweet potatoes. But considering that these were all volunteers, I'm not too disappointed. It gave me an excuse to get in the garden which was a pleasant endeavor despite the fact that it's been chilly and overcast all day long. Better that than burning up under an unforgiving sun.
It's raining now, slow and steady, making the cold seem even colder. I am so grateful for my warm house. I've been keeping the thermostat set in the mid-sixties because I don't want to overtax this heat pump and because with enough clothes on that's not bad.

I feel so cruel. I kept the chickens shut in the hen house and coop all day long. I've just had it with feeding eleven chickens and getting perhaps four eggs a week. I mean- that's ridiculous. So I didn't let them out this morning and I may keep them shut in tomorrow too. Their moulting is over and all of the hens are certainly old enough to lay and I would really like it if they began laying in the designated laying boxes again. But I have to tell you that I really do not like keeping them cooped up. No pun intended- that phrase comes directly from what I did to them today.

I finished the kids' dresses and have been working this afternoon on decorating the pocket on Maggie's dress. A fine thing to do on a cold, gloomy day. I've also made soup. Another good thing to do on a day like today.

So. We've had another school shooting. Two dead, others wounded, shooter in the hospital after shooting himself in the head. I'd call him the gunman but he just turned sixteen today.
Fuck, fuck, fuck, fuck, fuck.
I hear that Trump hasn't made any comments about the incident yet. I guess he's too busy worrying about getting the Supreme Court to back him on not making his tax returns public. What in hell are in those tax returns? Whatever it is, he sure doesn't want anyone to see it.

I'm so tired of this shit. The school shootings, the illegitimate president who is draining our nation of any greatness it may have ever had, the refusal of Republicans to try and do anything about either guns or this giant wad of nastiness they call president.

Still, I do believe that there are so very many good people. People who will absolutely go out of their way to help a stranger. People who love their children, who truly care about the plight of children all over the world, who try their hardest to be gracious and kind. People who believe that love is love and who, even if they weren't raised to be comfortable with that, have come to know and respect differently gendered people and who have opened their hearts to them. People brave enough to question the things they may have been taught as children about religion and morality and race and who have had the courage not only to question but challenge and break away from what may have been the very foundation of their beliefs, their lives. People who read and people who think. People who don't believe that science is a giant hoax. People who recognize the weaknesses and inadequacies in their own lives and who are more sympathetic and empathetic to those around them as a result. People who celebrate joy and art and color and diversity and knowledge and forests and trees and oceans and seas and rivers and plains and mountains.
People who love.

There are no fewer of those people now than there were before Trump got elected, before guns were made so readily available to anyone. Perhaps there are even more of the good people now than before.
I don't know.
I don't know shit.
But as a mother, as a grandmother, as an older woman I refuse to give up on the human race entirely. It sure would be easy to do that but it's not really a luxury that I can afford.
I have to believe there is hope. For the sake of Owen and Gibson and August and Maggie and Levon.

Meanwhile, I hold on to things like digging potatoes out of the dirt and acknowledging things like walls and floors and heat and blankets and hot running water and being able to afford the things we need and some of the things we want, and for soup and bread on a cold, wet night. And for a family whose first instinct is always to embrace and accept.
And for whom laughter comes easily.

Well. These are the things I'm pondering on this cold, wet night.
Stay warm,  y'all. Be safe. I can't afford to lose a one of you.