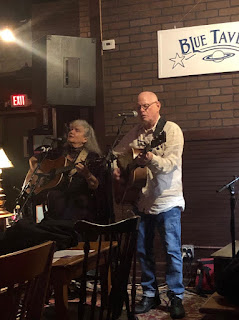 I grabbed that shot last night while Lis and Jim were doing the sound check and I'm glad I did because I didn't take another picture all evening.
Phew, y'all!
I was in a bar for five hours!
Where there were people. Lots of people. Some of whom I knew.
And besides that, Lis and I went to see a luthier who is making her an octave mandolin and went to supper with her before the show.
How much socializing can one woman take?
If it's me, just about that much and not one second more.
Here's a funny thing- I recognized the luthier. She was the partner of a midwife I worked with back about thirty years ago. She has a very distinctive face and presence and I knew I knew her as soon as she opened the door to her shop. We figured it out quite quickly.
She and Lis got down to business right away, talking about the new instrument and how it's coming along. It is going to be beautiful and if you've never heard an octave mandolin, which I had not, it's a very interesting instrument. I kept thinking of the sound as "gutsy" and "voicey". It's going to be a joy for Lis to play.
And dinner was a treat. I got Tom Kha Gai soup and a salad with the most delicious peanut dressing. I wanted to eat it with a spoon. I did eat the soup with a spoon, of course, and as I tasted the perfect coconut chicken broth and ate the pillowy cubes of tofu, I felt as if I had died and gone to heaven.
I was fairly comfortable at supper and tried hard to ask the luthier open-ended questions as I believe one is supposed to do, about her career and how she came to building instruments. She has also been in fire management and was Tallahassee's first female fire chief. AND she's now raising two grandchildren. So she's an interesting person, without a doubt.

Then. On to the Blue Tavern where there were already people waiting even though it was two hours until showtime. Lis and Jim set up their instruments and mics and worked out the logistics and the sound was figured out and balanced and all that stuff that has to happen to make listening the joy it is. I sat at a table and waited for Mr. Moon to join me and the place filled up fast. That was the hard part for me because it was the conventional time for "How-ya-doin's?" and "What's new with you?" and "Haven't seen you in forever," and stuff like that.
And I realize that because I never go anywhere or do anything like this unless Lis (and usually Lon) are playing, I am so out of practice. I can't deal with casual conversation. I don't know why but it drives me insane. I am sure that one woman in particular thought I was very rude. And I probably was.
I'm an asshole. I truly am.
Of course there were some people whom I do love to see and it was nice to catch up with them. It was good to see Jim Quine who went to Cuba with the group Lis and I went with. He and Lis have been playing together for thirty years, on and off and it shows. Their voices blend like sugar into butter and so do their guitars. Mr. Quine's brother, Jack, joined them for some songs. He played guitar and mandolin and sang but my favorite was when he played a sort of rollicking honky tonk piano.
Everyone loved that. It was a treat.
My husband got there right before the music started and I was so glad to see him.
And so the evening went and I enjoyed it tremendously but when eleven o'clock came around and they played their last song (Lis's "Paint The Town") and people reluctantly left, sad it was over, and the instruments and mics and cords and stands were packed up and stowed in the car, I think my favorite part of the evening happened. Mr. Quine had said his good-byes and gotten into his car but then got back out, came walking up to me and said, "I think I want a big hug," and put his arms around me and it was so lovely for me.
And off he went and I drove home with Lis and by the time we got here we were exhausted, even Lis, and all made our ways to bed. This was in stark contrast to the night before when the martinis were drunk and Lis and I did our best Betty and Wilma impressions, giggling and talking and being completely silly and happy and serious and cooking and sharing hearts while Mr. Moon shook up the icy confections and waited patiently for his supper which, I have to say, was delicious.
Fettuccine with seared scallops and cherry tomatoes and kale and a loaf of sourdough, hot out of the oven.
Sigh...
But last night, we all just went to bed and when I woke up it was almost ten o'clock and Glen and Lis had been up a long time. Long enough that Maurice had sat in Lis's lap for half an hour and DID NOT BITE OR SCRATCH HER ONCE!
She told me she was afraid to move. I told her that she had been smart to think that way.

And then I made pancakes and Jessie and the boys came out. Lis is Jessie's fairy godmother and she would not miss a chance to see her. The boys ate pancakes like beasts, especially August. I think he had five. And some sausage.
And then Lis had to go.
And then I had to cry.

It is so hard to see her go. We don't get to spend nearly enough time together. But I appreciated and cherished every moment of that visit.
She brought me a blue cashmere cardigan which I am wearing right now. I feel like I'm wearing a piece of the sky. It is warm and it is soft and I imagine that sweet woman hugging me.
I missed Lon being here too. We all did. When all four of us are together it's like a joyful design made up of all our different elements.
A sort of perfection.
But Lis being here was also perfection and that's all there is to it.

Luckily, I had the boys here to cheer me up after she left. Levon finally got to wear his dress. Jessie had texted, asking if I'd brought it to her house the other day because she couldn't find it and he wanted to wear it. I had not brought it over so he put it on when he got here. It's a little big but that's fine. 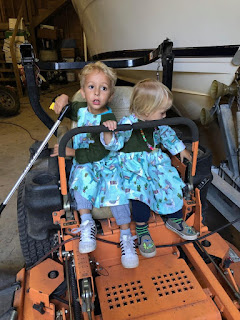 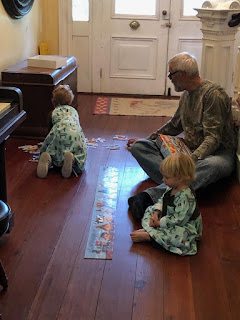 A puzzle in the hallway with Boppy. 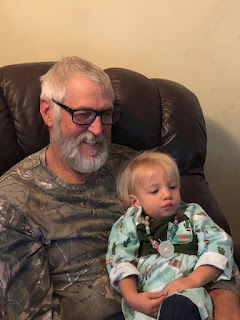 Levon wanted to sit in his grandfather's lap. Which pleased his grandfather more than I can say.
We made more necklaces and we read books and there was hot chocolate.

And so it's been a glorious weekend.
I think I better buy a damn turkey tomorrow. And still- it won't be thawed by Thursday.
I'm just not ready for any of this holiday season stuff. At all. And yet, it's going to happen whether I'm ready or not.

I'm feeling like the luckiest woman in the world, once again, and that is a very fine way to feel, even with Thanksgiving and Christmas bearing down on me like a ton of bricks. Honestly, that's how it feels. And yet, all will be well.

Off to make our supper.