Back To Real Life 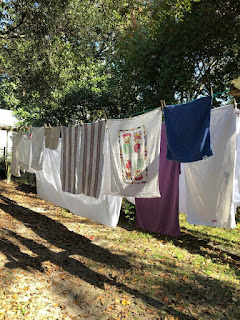 I was back to regular domesticity today and happy to be.
I was a bad wife and did not get up to drive to Jacksonville with my husband for him to get his blood drawn. Instead I stayed in bed until almost nine.
Lazy, lazy me.
But I got on to the chores pretty quickly. I put the turkey bones in a big pot of water and simmered that for most of the day and started a loaf of sourdough. The oven is preheating now for the bread and the turkey broth has been made into a soup and those will be our supper.
I got laundry done and hung on the line which always makes me feel as if I am painting my personal landscape. I know it's silly but I swear- when I'm dead I'm going to miss hanging clothes on the line on a beautiful cool, clear day. And making bread and soup, too.
Okay, sure, I'll be dead and won't be missing anything but if I could miss anything when I'm dead it would surely include doing those things.

Mr. Moon made his trip there and back in good time. He said it was a lot easier, knowing where he was going and where to park. I'm sure it was.
When he got home he found me on my knees in the garden, weeding and thinning greens again. Such a picky, tiny process. The weeds are smaller than the greens but more abundant, I have to say. I need to mulch. And I probably need to water more. We aren't getting much rain. Still, the little lettuces are coming up so nicely, the kale looks sturdy, the arugula is happy to bask in the sun and even the carrots have put on their second fancy leaves between the two green hair-like sprouts that come up first. Perhaps we will be eating more than just micro-greens at some point this winter.
Sure would be nice.

Wednesday night, we talked about getting together with sweet friends tonight and I just got a call and they are coming over. David and Karen, the violinist and his wife. I'm really glad they're coming. I told David that by the time they get here perhaps the soup and bread will be ready. He said they've been eating all day and they DON'T NEED FOOD. And then he said, "I'll probably eat some food."
"Okay," I said. "Either way."
I think that Karen will probably have a martini with us. I love that in a gal.

So I better go and check on things in the kitchen.