A Day In The Kitchen. Mostly 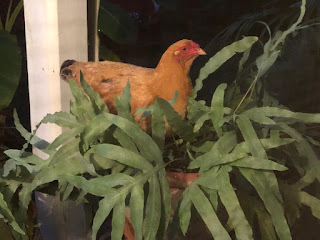 Well, I've definitely had a constructive day.
I decided to do as much cooking today as I could and that's what I did. Although the first thing that happened was that I called my compounding pharmacy to see if my hormones were ready and was informed that the doctor had never gotten back to them as to a refill. This has never been a problem before and I said, "Oh hell."
The woman at the pharmacy told me she'd call and fax again and that I should probably call too, which I did. I left a message begging them to please send over the refill order because "when I run out of my hormones it is NOT pretty."
Within an hour I got a call informing me that my prescription was ready for pick-up.
What a relief.
In other medical news Mr. Moon finally got ahold of Mayo and they did send off his blood to one of the two places in the world that does testing for this one syndrome that they think may be the problem with him but for reasons involving insurance (of course!) they had not tested the blood and hadn't bothered to tell anyone and so now Mr. Moon is going to go back to Mayo just to get his blood drawn and try again. AND the test takes four to six weeks to run.
My man was not happy. I'm not either, to be honest.

But. Back to cooking. First thing I did was drive to Monticello to buy my greens because grocery store greens ain't fittin'. And my own greens would make about enough for a tiny mouse and her little family. I bought my greens, brought them home, cut out the stems and cut up the beautiful leaves and washed them twice. 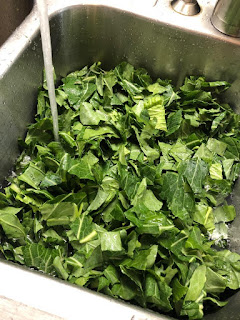 I made two pots of the collards. One my regular vegetarian way and one an Auto Immune Protocol batch so that Jessie can eat them. And then I basically simmered them all afternoon long.

On to the cranberries!
I also made two versions of those. One my standard cranberry/orange/apple/pecan relish and one an AIP cranberry sauce. 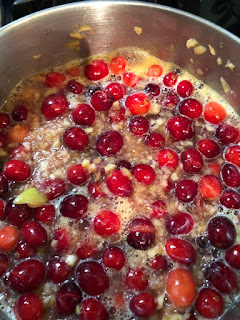 It too had apples and orange in it but no nuts and it is honey-sweetened. It's delicious.

Then on to the pies! I made up three of the most beautiful pie shells I think I've ever made. I made the pastry in the food processor with the recipe that came with the machine. And for once, I think it worked. 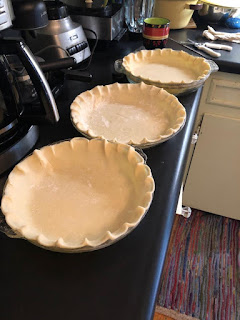 I realized when I started making the fillings that I have no corn syrup which is just about the main ingredient in pecan pies. However, instead of getting back in the car and driving to a store I decided to substitute honey and maple syrup for the traditional and frowned-upon Karo syrup. I have no idea how that's going to turn out but they look okay except for the chocolate pecan and that's because when I moved the pie in the oven some of the filling spilled over and because my racks aren't even, it sort of baked in a most imperfect way. Oh well.
For the third pie, I decide to do a lemon chess pie. I have a whole bunch of lemons and Jessie has a lemon tree filled with the fruit so why not? Have you ever had chess pie? I think it's a southern thing. The basic chess pie has eggs, butter, sugar, a little bit of cornmeal and some vinegar in it. The lemon version that I made also had lemon juice and corn starch which seems like a cheat to me but I did it anyway. It was a King Arthur recipe and I do trust their kitchens.
So we'll see.
In the middle of making the fillings for the pies, my power went out. Of course. But with a song in my heart and optimism in my brain, I went ahead and filled those shells and soon enough, the lights came back on and my oven looked like this. 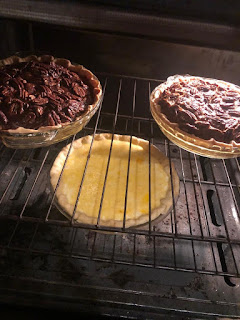 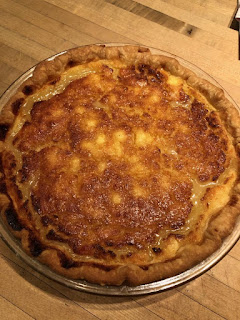 I hope it's good.

So. That is all done. The only thing I have left to do is to make the cornbread for the stuffing and then the actual stuffing and turkey. And gravy. I'm not making the bread this year which is an absolute first. We bought Hawaiian rolls and some Sister Schubert rolls at Costco. I feel like I'm probably going to hell for that but Lily's oven is just not very big and there are so many things that need heating up at the last minute that baking angel biscuits right before the feast is always difficult.
That's my story and I'm sticking to it.
And I just did some calculations and realized that this will be the first time in forty-three years that I haven't made rolls of one sort of another which also reminds me of the year that I was in full hippie mode and made the rolls for a Thanksgiving dinner at my mother's house with whole wheat flour and they came out like the proverbial hockey pucks. My dear, old, sweet grandmother whom we'd sprung from the nursing home for the feast gnawed and gnawed at one and finally said, "What IS this?"
When my mother said, "It's a roll, Mother," my grandma replied, "Must I eat it?"
I've told this story before. Whatever. It's a good story and a true one.

Food and stories and family to eat the food and tell the stories. That, ideally, is what Thanksgiving is all about. Well, those two things and the traditional giving thanks when it's all over but the leftovers.
Or maybe that's just me.

I may or may not post tomorrow. The annual Jerry and David music reunion will be happening and if I can get my agoraphobic ass out of the house we will attend. Wharton will probably show up as well. I remember when I used to host a party every Thanksgiving Eve when all of this happened at my house. I am sort of incredibly happy that I'm no longer responsible for the gathering and sort of eternally grieving that I'm not.

All will be revealed.