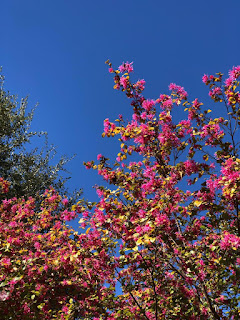 That's what the sky looked like today. I took that picture at Jessie's house where that giant shrub is in bloom and I can't for the life of me remember what its name is but isn't that a fine contrast?
Even Levon who was working outside with a shovel said, "Pretty day." 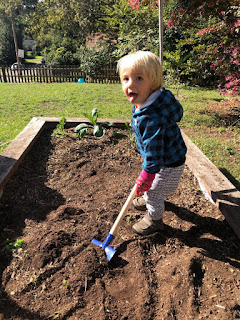 You have to love a two-year old who notices how gorgeous it is and remarks on it.

I went over to Jessie's this morning to help her with the boys while she cleared out her raised beds and planted her own greens and things. August has a residual cough from his last cold and Levon is snotty so she didn't want to take them anywhere and she has really been needing to get things planted. Knowing that if I went to her house and her house only I wouldn't have to change into "town" clothes but could stay in my overalls and Goodwill cashmere, I volunteered to go hang out with the boys while she got things done.
I had a great time with those boys. I love being silly with them. We read a lot of books. Levon likes to sit beside me with a blanket tucked around him. He loves his blankets. He doesn't have just one favorite, he seems to like to having a collection to choose from. August will sometimes put his  hand on mine or rub my arm while I'm reading and that makes me so happy.
Before Jessie went outside, she made some noodles for the boys with bone broth and then, to try and alleviate August's cough a little bit, she made tea and served it in the boys' tea set with honey and milk and a muffin. Levon was down for a short nap at that point but August and I sipped our tea and stirred our honey. 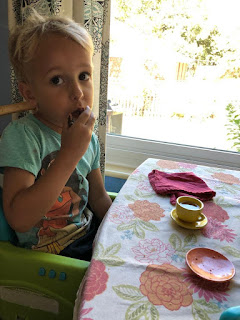 When Levon woke up he had some tea as well and then we all went outside and helped Jessie. The beds were full of very healthy looking zinnia volunteers so first we pulled all of those and Jessie got in the dirt with a pitchfork to break up old roots and fluff it all up. 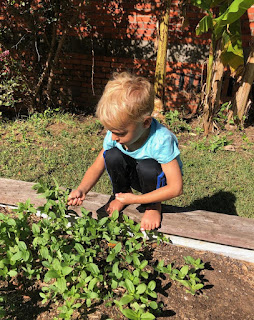 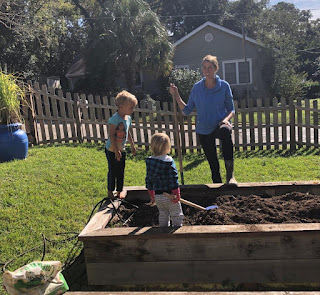 While she planted, the boys I went back inside and read some more books.
She got it all done and watered in and I kissed everyone good-bye and came home.

Last night one of the young roosters almost lost his mind, realizing after dark that it was getting very, very cold and that sleeping up in a tree was not a good idea. He actually came onto the porch which is quite unusual for him because he's skittish around me. 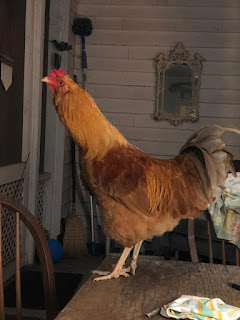 He even jumped up and tried to get into the house through a window. That, of course, only works if the window is open which it was not.
"Ya damn rooster!" I said to him. "This is why you sleep in the hen house!" I half-heartedly tried to throw a towel over him to grab him up and carry him out to the roost but he wasn't having that.
He spent the night on the porch, I do believe, but tonight he's roosting with the rest of the chickens. He may be smarter than I thought he was.
He certainly has an extraordinarily long neck, doesn't he?

And so it has gone. I did a little more work on August's dress and next I'll move on to the pants and to the finishing on both dresses. I need to disguise my crappy sewing on the pockets with some embroidery. I didn't get to listen to much of the testimony from Washington today but if I'd been at home I would have listened to all of it. I know it would have made me angry, hearing the Republicans trying to come up with any reason whatsoever to challenge and disparage the witnesses. These people can't possibly believe that Trump is innocent of trying to use quid pro quo to serve his political interests. I mean- come on. They keep saying, "It's just hearsay," but every bit of testimony supports the whistleblower's claim, not to mention the fact that the funds allocated to the Ukraine were finally delivered within forty-eight hours of the White House getting the news about the whistleblower's report.
What the hell is in it for the Republicans to be so stubbornly supportive of this serial liar and completely incompetent president? Fear of not being re-elected? Seriously?
Have they no moral compass at all? No conscience? No love for their country? NO BALLS?

I don't know. And I really don't believe that the Senate is going to vote to impeach and I really don't think that Trump's supporters are going to change their minds about the idiot one iota because they are truly living in an alternative universe where Donald Trump is the best president the US has ever had and his wife is the classiest First Lady ever to have lived in the White House. 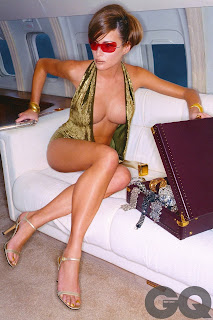 Classy! Every freaking comment about her on pro-Trump sites uses that adjective. "So glad to finally have a beautiful and classy First Lady!" they say.
You know what they mean though, right?
"Okay, so she may not have gone to Princeton and Harvard but she sure is white!"

Well. That was a bit of a tangent.

I have the absolute most beautiful loaf of sourdough in the oven right now. I am still experimenting and I think I may have learned a thing or two with this one. We shall see.

Tomorrow I'd like to dig sweet potatoes. It may rain but then again, it may not. They say it's best to harvest them after come cold weather, that it sweetens them up. That may or may not be true. I just hope they're fat enough to make the effort worth it although if they're tasty enough, size won't matter that much.
Take that as you will.

I was going to post a video of Keith Richards talking about snorting a tiny line of his dad's ashes but y'all probably aren't as weird as I am. In it he talks about "ingesting his ancestor" and I can relate to that, having not snorted but having licked my fingers after scattering the ashes of some of my beloveds. If you're truly interested go HERE.

And now you're probably all thinking, "Jesus. When is Mr. Moon coming back?"