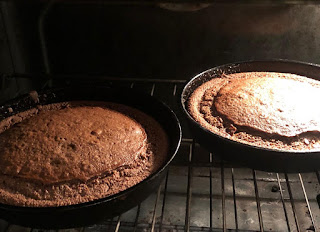 My house smells gorgeous right now with butter and sugar and chocolate and vanilla and almond. It almost reminds me of the fair, not just because of the way it all smells of sweet, hot decadence but because it is that time of year and indeed, the fair is in Tallahassee right now and so I'm flashing back to walking through the booths where they sell the fried and spun and dipped and fried again foods, through the midway with the games and lights and rides, the neon flashing and the music booming, the children with big eyes and teenagers with arms around each other, the big pavilions where they show the farm animals with their liquid eyes, the chickens with their gaudy feathers, the pies and cakes and breads and jams and the artwork, too.
The fair can be grand if you're in the mood but it can be a nightmare, too.
The very threat of losing a child in the crowd was enough to take the shine off the fair for me once I became a mama but I will admit that I do love the quieter parts of it- the 4-H things, the little kid rides, the way my grandkids flash huge smiles as they go past where we're standing, watching them go around and around in a little car on a track or on a pretty pony on a merry-go-round.
Overall, though, right now I am most happy to be home on this evening in my house with the rain coming down outside.

I slept so deeply last night that I don't even think I turned over once. My sheets were barely disturbed. But I did wake a few times to hear rain falling and it's been raining off and on since then. The cold weather is right behind it.

I went to town this morning to meet up with Lily and Lauren and Maggie and Jessie and Levon. August was at school. We gathered at Jessie's house. 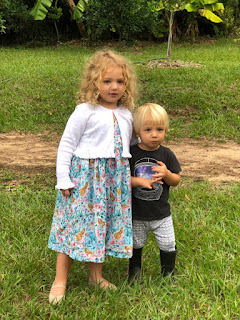 Levon and Maggie had a wonderful time playing together. Maggie found the doctor kit and gave me a thorough exam proclaiming that I had a templeture but she cured me right up with a round of injections. Levon also listened to my heart with the stethoscope but he didn't have much to say about what he heard. We ladies all talked a lot and while we were there, Jessie had a conversation on the phone with the doctor (a genuine doctor in this case) about how she is doing on the diet and so forth. I asked her if he had told her he was proud of her.
"Sort of," she said.
She's working so hard at this, giving it every real chance. I told her I was proud of her. And I am.

Lily and Lauren and I decided to throw diet and caution to the winds and went to Maria, Maria for lunch. I just love that place. I got a chili rellano which was perfection and a Maria's tostada which was too damn good. I love the way the food there tastes like it should- real. Not gooped up with too much sour cream and lardy refried beans and yellow(ed) rice. And it reminds me so much of Cozumel. The place was packed when we got there, empty but for us when we were finished eating. So hopefully, they're doing good business and can continue to serve the food that makes me so happy.

After we ate I went to JoAnn's Fabrics and bought a pattern and flannel to make Maggie and August their dresses. I also got enough material to make them both a pair of pants to wear under the dresses. Winter clothing.
Well, Florida winter clothing.
Tuesday Morning is next door to JoAnn's so I stopped in there, too, feeling like maybe this shopping thing was indicating a micro-manic incident but when I walked out thirty minutes later after having purchased nothing, I felt like it probably hadn't.

And then home where I put the washed sheets into the dryer and made the chocolate cake for Levon's birthday. I offered to make it and Jessie took me up on it. She's got so much going on right now and it honestly makes me happy to bake a birthday cake. It won't be fancy but it will be good. The tiny party will be held here tomorrow. It's just family and there will not be a bouncy house or really anything at all except for some food and the cake and presents. Two-year olds don't need a lot. The kids can play and Levon won't have to wonder why there seems to be so much pressure on him to fulfill some mysterious need of the adults in his life for him to be thrilled about something he doesn't begin to understand. By the time he's ten, a bouncy house will be in order but for now- simple is the best.

I can't believe it's been two years since that little boy was born. It's so fun getting to watch him grow, seeing who he is and falling in love with him. He learned a new phrase today from Maggie who hates to leave Jessie's house.
"One more minute," he kept saying to his mother as she was trying to get him into the car to go pick up August from school. "One more minute!"