Not The Birthday We Were Expecting 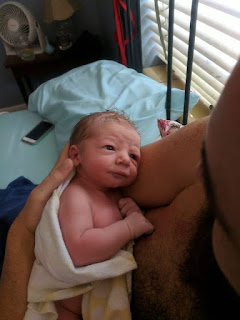 That is what Levon looked like two years ago today when he was fresh born and trying to figure out the mystery of it all. Can't you just see the entire world of wonder in those eyes?

I woke up this morning to the clearest blue sky, the finest cool air. I was so happy that it was Levon's birthday and that we were going to have a little party for the boy. I hastened to get my chores done. I swept some and I made the frosting for the cake and iced it. I made myself a good breakfast with an egg and many vegetables and I ate it all in a tortilla with salsa. Everything was perfection. I went back and reread my post from the day that Levon was born. You can find it HERE if you want. Such a fast and beautiful birth. I will never forget how Jessie was cleaning up the kitchen after she made pancakes and went on to folding laundry and then the next thing we knew, it was time for Levon to be born. What a perfect day!

Right around the time people were supposed to get here around one, Hank called. He'd been having ocular migraines- not the headache part, just the visual wavy-lines, bright-lights part. I get those too, maybe once every year or so and that's how he's done it too but since Wednesday he'd been having them frequently and was a bit freaked out. So was I because if anything is wrong with any of my kids I get so anxious. We talked about it a bit and he said he'd go to the doctor next week and we sort of ended there but later he texted to say that May would take him to the doctor on Monday and then the next thing you know, I was saying that no, I'd take him today. Both of us needed reassuring that there was nothing really wrong. And Rachel is in LONDON! Her best friend bought them both tickets as a wedding present for Rachel so she wasn't here to take Hank, and May was working.
So right after all the kids got here I got dressed and went into town and picked him up and we went to a doc-in-the-box where because of the ACA he was able to pay only a ten dollar co-pay (thank you, bless you, President Obama!) and because we were the only people there we got to see the nurse and then the PA right away.
His blood pressure was high and the PA got a good history from him and said that they'd start out by putting him on some medication for that and then we were able to leave, much relieved that things didn't seem very dire.

We'd gotten a text while I was gone that said that they'd had a bit of an incident here in Lloyd. While playing in the bamboo forest, a nest of ground bees had been disturbed and all of the Weatherfords had been stung.
I texted back, "Is everyone crying and screaming?"
"Not anymore," Lily answered.

Those fucking ground bees. Or wasps. Or whatever they are. They're a true danger, especially to anyone who is allergic. Luckily, it didn't appear as if Jessie or Levon or August are although I do think there was some trauma.

But the cake was decorated eventually. 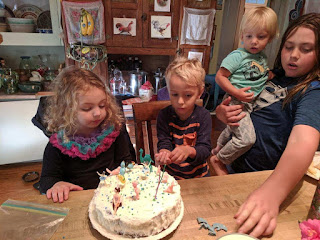 They used my bag of vintage cake-toppers and of course that made me happy. Owen's been sticking those things into cakes for years now and August and Maggie have also had their fingers in the bag, choosing between chickens and dancers and little girls with pink bonnets (those were actually mine when I was a little girl) and then sticking them firmly into cake frosting. I have a video of the birthday cake with lit candles being presented to the birthday boy and then him blowing them out.
The cake seemed to go over well. 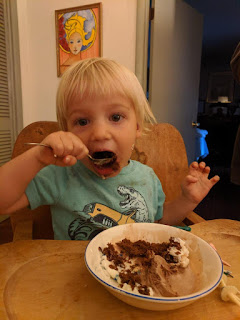 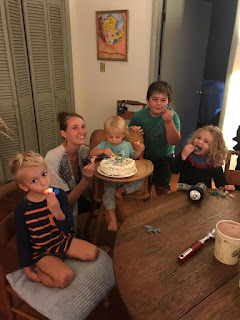 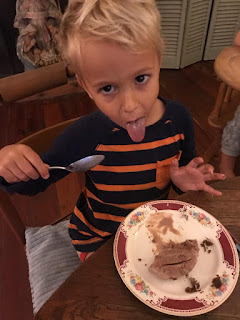 It was a very simple cake- devil's food with vanilla butter cream frosting but it had my heart in it.

By the time I got home, Lily had taken her kids off because Owen had a Dungeons and Dragons thing going on but Jessie and her boys were still here. August was wrapped up in a soft blanket, sitting in Boppy's chair watching some TV and he showed me some of his stings.
"Was it terrifying?" I asked him.
"Yes. It was," he said.
Jessie had given him a small dose of Benadryl and he was a bit fuzzy around the edges. Poor child. Jessie said she didn't even know how many stings he got. Levon seemed fine.
They had waited until I got home to unwrap Levon's present. I wish I had a picture of how I wrapped it. It was huge so I used a very festive tablecloth and a few yards of red satin blanket binding to do the job.
Needs must.
He was happy with this front-end loader and dump truck and as soon as the tablecloth came off he said, "Open, Mama! Open!"

After that it was time for them to go home and August started complaining of pain in the area of his left jaw. Jessie and I both looked and could see nothing. He has all his teeth so it's not that. He's had a little sinus thing going on and so who knows? It could be an ear infection at this point. He was unhappy though, to say the least. When he got in his car seat I told him that some days are just very hard.
"Like this one?" he asked.
"Yes, like this one. But sometimes you just get a very good night's sleep and when you wake up, everything feels better."
He told his mother he wanted to go home to get cozy and could he have a blanket to be cozy in in the car? She went and found him one and then Levon had to have a cozy blanket too so I went back in the house and found him one and wrapped it around him and I kissed my daughter and said, "When you have a baby, you don't expect to have days and feelings like this, do you?"
I could immediately relate, having just been so worried about my son. This is the sort of thing that never goes away or gets easier. A mother's worry, concern, desire above all else to make it right and well and okay.
And then come the grandchildren and all of that worry and concern and desire to make it right simply increases with each of them as they go through the normal life-passages, some of which are painful or feverish or scary and on top of worrying about the child, you worry about your own child- the parent now- because you remember what it felt like to have a kid who wasn't feeling well.

It never ends, does it?

Well, it may not have been the perfect birthday but I think the children had fun. Except for the terrifying parts. 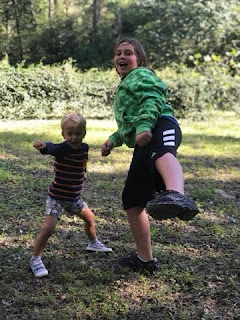 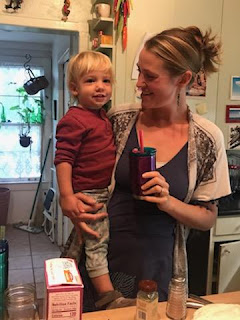 I am sorry I missed it. Well, again- maybe not the terrifying parts.
But I am glad I got to be with Hank. Despite the reason we were together, we enjoyed each other's company and were both quite cheerful by the time it was all over.

It's getting colder. My heat is working but Lord, Lord! the weird sounds it's making are a bit disturbing. But I'm not worried. I can always turn on the gas logs and close the doors, room by room, to make cozy places of warmth.
I just got a text from Jessie saying that August had a little nap in the car, woke up feeling pitiful but then got some Motrin and had a lavender soda bath and a yogurt and is now in fine fettle.

I think I'm just going to fancy up a frozen pizza for my dinner tonight. I can't face much chopping and roasting or mixing and concocting. But trust me- POWER greens will be involved.

Jack's already waiting for me.

Stay warm, y'all.
Happy birthday, Levon!
And because sometimes I just really do need some Keith Richards, here's something I've posted probably more than once.
So what? I give it to you again.