When Your House Is Your Friend 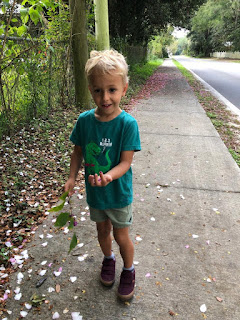 Mr. Moon left this morning sometime around 2:00 a.m. and last I heard, he was in Seattle with enough of a layover to get something to eat. So, he's off on his adventure and I am here in my little world and happy to be so.
Jessie brought the boys out around noon for a visit. We played and read books and snack-lunched. We walked down to the Post Office. I thought about how I used to stroll and then walk with Owen to the post office every day that he stayed with me. And then it was Owen AND Gibson. It's not much of a walk. Less than a block, really. Levon wanted to push his stroller which is missing a few parts but that does not concern him in the least. 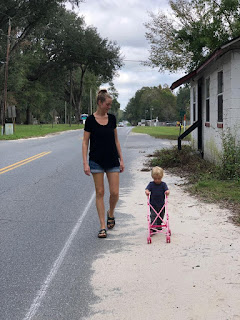 The pushing is the important part, of course.
Here are both boys in the Post Office. 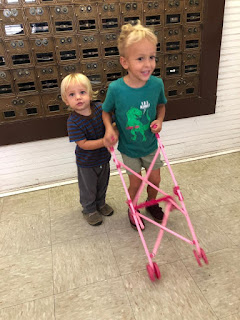 There was absolutely nothing in our box so I said, "Well, let me at least get a picture," and for once, they were compliant.

We walked around the volunteer fire station for a bit. There's a nice bit of grass there. It's also the helipad in case someone needs LifeFlight. I find that rather reassuring while at the same time I hope never to need it. And of course while we were exploring, Levon zoomed right in on a big piece of heavy machinery which I have driven or walked past hundreds of times and never really registered. 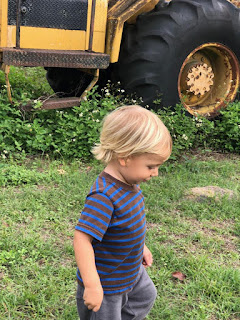 He walked around it as far as he could in order to get many different views.
He reported that it was "big."

I had an appointment to get my teeth cleaned at four so after Jess and her cubs left I got ready for that and then drove to town. I was a bit apprehensive about it but mostly because my dental hygienist and I have such different opinions about things and I never even knew this until we became Facebook friends.
Sigh.
But all went well. We seem to both be treating each other with extra-soft kid gloves and talk about our grandchildren, traveling, stuff like that. In a way, it says something valid that despite vast disagreements concerning the most divisive issues (politics and religion, mostly) we can still retain a sort of friendliness which does not seem too forced or false to me. We hugged when we parted. And of course I only see her once every six months, but in a way, it's a fairly intimate relationship when you think about it. I have issues with all things concerning my mouth and teeth and so I have to feel trust and I have to feel reasonably comfortable with a person who gets up close and personal in that space.
And I do.
I saw Doc and thanked him again for gluing that crown back on. I can't help but like this man. He's been my dentist for many years and we slap palms when we see each other now.
Which is sort of funny but it is a form of connection, at least.
"Good-bye, Mary," he said when I left the office.
"Good-bye, Doc," I said before slipping out the door.
And that was that.

I stopped by Costco to buy a Costco-sized bag of POWER greens because when Mr. Moon is gone I throw a couple of handfuls of those in everything I cook. Power greens. Haha! I get the visual image of a Florida pioneer woman cooking up a big pot of collards and mustards and telling her family to be sure and eat up their power greens! And the sweet potatoes too because those are SUPER FOODS!
Who knew?

By the time I got home, dusk was settling in and the moon was rising, silver white and reassuring with its eternal face. I pulled into my driveway and was happy to be home. Levon informed me today that my house is "very tall." I suppose to an almost two-year old who hasn't spent much times in cities that a two-story house is indeed very tall. I told him he was correct.
It's funny that when Mr. Moon is gone I seem to appreciate my house more than when he's here. I suppose part of that is simply that I'm not thinking about making his supper or packing his lunch or wondering if he has enough ironed shirts for the week as I make my way from kitchen to bedroom to bathroom and back again in this old tall house with its added on bedrooms and bathrooms and porches, built to accommodate bigger families over the years. When I'm the only one here, it is quieter, of course, and it seems to me that the house and I both are able to let our hair down a bit. It's almost as if we become companions, crone-cronies. We are both rather old but we are still strong and capable of doing what it is we have always done. We have our crooked places, our scars and our quirks, our secrets and our mysteries, our strengths and our weaknesses, and our definite signs of aging, some of which make us even more comfortable.

Chickens are roosting. The lettuces are up in the garden. Gonna be cold tomorrow night.
For us, anyway.
I am content.