Not Snowing Here, Thank You Very Much

I have nothing to write about tonight. Not a damn thing. Today's been fine but it's been very quiet and I realize as I write this that I have not spoken to one human, even on the phone.
Which is fine.
I've heard from Jessie and all is well with them. They are camping tonight, I think, with friends.
Hank texted me that he slept very, very well and is feeling good today.
Mr. Moon sent me a picture. 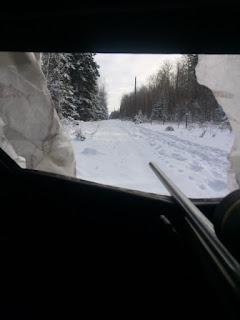 Uh...no.
I'm sure he's having a wonderful time but I am quite glad to be right where I am. It was a beautiful day today, never got much above seventy but again with that sky as blue as the eyes of Sweet Hippie Jesus.

The first time I ever encountered snow in any real quantity was when I went to college in Denver. I've written about that before, I'm sure, but honestly snow now just reminds me of one of the worst depressions of my life. It must have lasted at least two years. Maybe more. The depression, not the snow. I was a lost little lamb in Denver. I felt as if I'd been dropped onto an alien planet and there was no way I could be cool enough or savvy (I hate that word) enough or anything enough to fit in there. I didn't miss my parents but I did miss my little brothers and also my friends who were all misfits like me who came from families that were broken or sad or dysfunctional in one of the myriad of ways that dysfunctional families can be. I'd had a boyfriend who'd made it quite clear that he wasn't interested in a long-distance relationship when I left Winter Haven. He'd been my first and I've been thinking of him a lot lately which I almost never do. He turned out to be fairly insane and I'd broken up with him a few times over the time we were together but he'd represented a sort of crazy conundrum of safety and wildness to me and in Denver I found myself yearning for him even as I discovered that he was sleeping with a good friend of mine and had eventually found a new girlfriend. These facts pierced my heart and of course in those days there was no e-mail or texting or easy long-distance calling or Facebook. Letters. We wrote letters.
Or, as in this case, one person wrote letters and the other person never answered them.
I'll never forget one snowy afternoon I was walking to a place called The Open Clinic where I volunteered, answering phones and talking to people who had problems ranging from feeling suicidal to wondering what sort of drug they may have just ingested might be, to being on the very sharp ragged edge of a bad trip, when I saw through the gray, snowy sky a man walking with a stand-up bass on his back and a sort of suitcase-like thing in his hand and my heart almost burst out of my chest, thinking it was my boy, come to claim me after all. He was a bass player, he carried his bass like that sometimes.
But it wasn't him.
All these years later I can feel the disappointment and sorrow in my heart that it hadn't been him. That realizing no, he was never going to show up. That no, he did not want to claim me as his own.

I spent that first winter trying so hard to embrace this different life I found myself in. I did make some friends. I bought a coat heavy enough for the weather and a pair of hiking boots too. But I never could make myself feel at home there. The snow was lovely when it first fell and the earth seemed to quiet and soften but then it just turned into ice and I was so cold and I never did fit in and I never did figure out how to either walk on ice or drive on it.
So for me, snow is loneliness and sorrow, it is Joni Mitchell singing "River" while I quietly weep and embroider snowflakes on a denim work shirt for a boy who doesn't love me.
It's something that falls on mountains in a form called powder which delights people who grew up skiing on mountains while I grew up skiing on water behind a boat in a place where snow was nothing more than a rumor or a picture in a book.

I have not seen that boy in over forty years. Oddly, I am still friends with his brother and his mother, although I rarely see them. When I ask about him they hem and haw. No one seems to see him. He was indeed, crazy I guess and still is.
As glad as I am that I escaped that particular nightmare, I still think of him with some very deep emotion. When I do think of him, that is. He was an important part of my life and I can't deny that or disregard it. And if it had been him, walking through the snow on that gray afternoon in Denver, my life would have taken a much different turn.

Well, I'm pretty fucking glad that that did not happen. I suffered and I survived. I ended up in a place my children like enough to have stuck around so that I can see them whenever I want. And I am long-married to a man who is definitely not crazy and whom I love with all of my heart.

Yesterday when Jessie got here with her boys I went outside to greet them and held my arms out to Levon and said, "Happy birthday!" and he actually ran to me and let me pick him up and kiss, kiss, kiss him on the neck.
And that made up a million times over for a boyfriend who was not a boyfriend walking through the snow with a bass on his back.