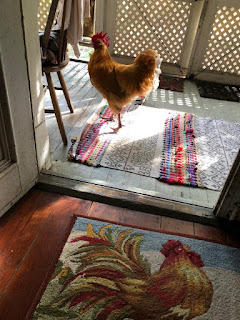 This morning Liberace spied something on the floor in the hallway and was determined to come in and peck it up. He was giving his tidbitting call to the hens while I was in the next room, sewing on Maggie's dress. I got up to shoo him out and realized that he and the rug made a pretty picture together. I wish I'd gotten one with the sun shining directly through his proud red comb because that was truly spectacular but if there's a way to make a rooster pose I haven't figured it out.

I took a walk this morning and it felt fine. My knee was a little whiny at first but it soon shut up. I spoke to my first human in two days when No Man Lord Guy raised his arms to me the way he does as I passed and I sang out, "Good morning!" He nodded and went about whatever it was he was doing. Hanging jeans on the fence, I think. I included the Post Office in my walk, having forgotten that it was closed on account of Veteran's Day. I'd collected the mail on Saturday so my box was empty.
Oh well.

When I got up this morning I thought about how I should spend my day and I thought, You know what?  I could spend the entire day sewing.
And that is mostly what I did.
I got Maggie's dress almost completely made and will finish it up tomorrow, most likely, and then start on August's and THEN I'll make the pants that go under the dresses. If, that is, I calculated correctly as to yardage. I'm not sure I did. I am not happy at all with my choices in this project. First of all- the pattern is just not that interesting although it does have raglan sleeves which are far easier to sew than regular, it turns out. I'm not thrilled with the material I chose either. I do like the print I got which has llamas on it but the deep forest green I got as the contrast is just a bit dark and weary for a child. 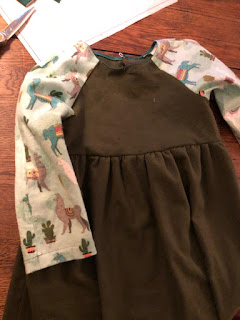 That makes the green look brown and it isn't brown. Trust me. I would NEVER make a brown garment unless I was forced to.
August's dress will be mainly the llama print with the green for the sleeves and Maggie will get llama pants and August will get green ones.
In theory.
But honestly, it all just looks like messy pajamas to me.
Oh well. It is very soft fabric and they'll be cute when they wear them together.
Again. In theory.
And no one is going to force them to wear these outfits so it's not a big deal.
And I've had a very good day, sitting and sewing and listening to an audio book, not feeling guilty in the least.
I may do the exact same thing tomorrow although I do need to make a run to the grocery store.
I should probably do that just for some human interaction if nothing else. It's a bit worrisome that I'm so content to be by myself. Our culture advises against that sort of thing, especially for those who may suffer from depression or anxiety but quite frankly, I am extremely grateful to have reached an age and a place in my life where I am not bothered at all by solitude. I look back at the most stressful times of my life and realize that I have never really been comfortable in situations where I've been surrounded by lots of people.
There have been exceptions, of course.
But I do wish I'd realized a long time ago that there was nothing wrong with me for not being a social butterfly, for preferring to be in the company of one or two people whom I really loved rather than in a situation where a lot of casual chit-chat was involved. As I've written about before, one of my earliest memories is of a birthday party of mine when after the presents were opened and the cake eaten, I went to my room and shut the door, leaving my guests to continue without my presence. My mother found me and chastised me for being rude and thoughtless (I was probably turning five) and yes, she was right- it IS rude to leave one's own party to go hide away but looking back with the hard-learned knowledge of who I am, it makes perfect sense.

Perhaps tomorrow I'll write about the first and only place I ever lived entirely by myself. I have such an inclination to mate and I started having children at such an early age that it didn't last very long- that solo life.
But I remember it so fondly.