Oh, How I Love My Owen 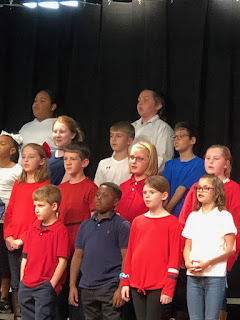 Last night Lily texted to tell us that Owen was to be in a choral production at his school tonight and that we were invited. Of course, Owen never actually participates in these things. Oh, I mean he'll walk in with the rest of the kids and he'll stand there but he doesn't even pretend to sing for the most part and as to the hand motions- nah.
Tonight there seemed to be a tiny increment of activity beyond the last two year's but you had to watch closely to catch them. He's ALWAYS been embarrassed to be around people singing. He just has. Even when he was practically still a baby. If we burst out into song around him he'd say, "No! No!" The most miserable I've ever seen him was when he was in preschool and they put on a princess ball or something to that effect and he had to dance with a little girl and then participate in the singing and I could tell that he seriously wanted to die.
Now Gibson? He's a born and joyful performer. He has no inhibitions about giving such things his all with such zest and happiness. We shall see what Maggie's like. They are all so different.
The concert tonight was a patriotic one, I think in celebration of Veteran's Day. I especially enjoyed the state-naming rap. In alphabetical order.
After the concert was over, Owen morphed back into his regular self and he hugged me and I hugged him so hard and told him that I was almost proud of his complete refusal to participate. And then I hugged him again and told him how handsome he was. And THEN I congratulated him on coming in second in a speech contest in his class. He's a complex kid, my Owen and I sure do love him.
Gibson was full of hugs and Maggie moved from lap to lap. 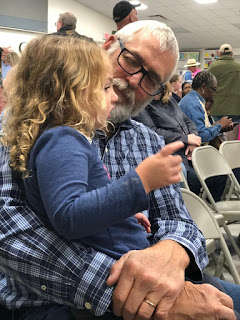 When we all said goodbye she made her mother kiss me.
"Kiss your mommy," she commanded. And of course, Lily did.

So that was a fun little thing on a Tuesday night. As we all know, I'm not a real big fan of patriotic displays but just being in a room full of parents and grandparents who have come together from very divergent communities and cultures to support their kids and grandkids makes me feel better about life in general so there was that.

When I took my walk this morning I noticed that someone is actually doing some work on this old house which is right down the street from us. 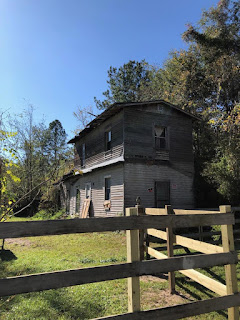 He's taken off the front and side porch so something's going on. I've wondered about that house so many times. It would be a beautiful thing to see it brought back to become a home.

When I got down to the county line part of my walk I saw No Man Lord Guy hauling a washing machine on a handcart. A dolly.
"Are you going to haul that thing all the way to your house?" I asked him.
"Yeah. I was supposed to get some help but I didn't so I'm just going to do it myself. I'll get it there," he said with resigned conviction.
"I know you will," I said. And we both laughed.
And he did. When I drove by later it was sitting in his front yard. I guess he sells these things he hauls home. Lately he's seemed to be focusing on lawn mowers but I suppose someone had a washing machine they wanted to get rid of and he took it off their hands.

So that's what's been going on today in Lloyd.
Oh! There was a small miracle. After Liberace instructed one of the hens to lay in that basket on the porch, she did actually get in there and eventually laid an egg. 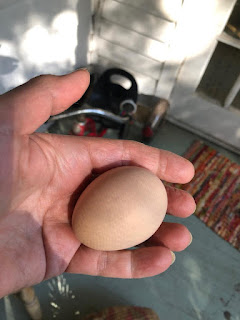 First egg I've gotten in a week. Those wily hens. I don't know what I'm going to do with them.
The two days I kept them shut up in the coop didn't result in one egg in the nesting boxes.

I listened to a lot of the impeachment testimony and I swear, Jesus H. Christ himself could appear before the Senate and point the finger of blame upon the Orange Pretender and those motherfucking Republicans would accuse Their Lord of being a Never-Trumper which would probably be true but far from the point.