Saint Dolly And Other Things To Ponder 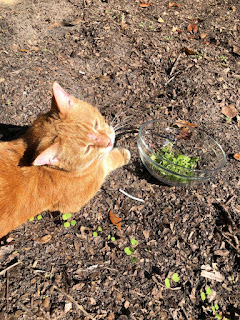 Today is my last day of aloneness. Mr. Moon will be home tomorrow. He sent me a shot of a beautiful Bloody Mary he'd ordered at an airport bistro and said that it was hard to travel without his Bloody Mary partner. I told him to have one for me and he answered, "I did! I got a double!"

The sun was back out today, glorious and warm. It dried up the humidity and dispelled the gloom. It made me want to go outside and I did. I decided to thin my greens and so I got down on my knees with a little glass bowl and it was easier to pull the tiny sproutlings, thinking of them as a sort of harvest, rather than just a slaughter. Maurice came out and helped me by laying directly on my rows as I worked. She put her snout in the bowl several times to take snorts of the tiny plants and even tasted them but after that, she lost interest in them and was content to just lay in the sun and drowse. It seems to me that she's been seeking more closeness lately. Here she was last night. 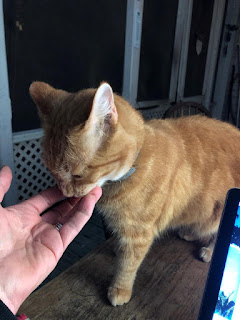 And this afternoon as I was leaning on my car and texting a friend she surprised me by rubbing her head on my shoulder. I didn't even know she'd jumped up on the car. 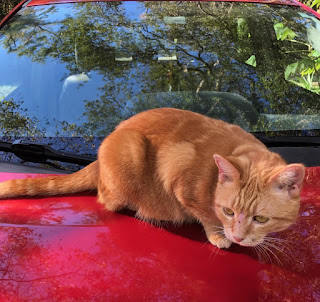 You can see, though, that she is very wary. And you can also see her poor, scared face from her encounters with Big Mean Jack.
She'll be mighty glad to have her man human back. She loves to sit on his lap when he's in his chair although she does get quite pissy if he tries to do something crazy like change positions.
Blood is often drawn but he's patient with her. He knows she had a hard childhood. He is good with crazy.
Thank god.

Besides the row-thinnings I also trimmed up the damn horrible Canary Island Date Palms but did not get one puncture wound. That was a first. I also did a little Sago palm trimming and cut back a few of the Sabal palms too which made it possible to gain access to the front porch. Very, very light easy work. While I was going about this I was listening to a podcast called "Dolly Parton's America." I tell you what- Dolly is an incredibly intelligent woman, an amazing and prolific song-writer, a fine musician and one complex human being.
She may also be a saint. Did you know that she started and sponsors a book club program that mails free books as gifts to children from birth to age five in under-served communities? Not just in America but all over the world. This site says that the program has mailed almost 128, 000,000 books to over a million registered kids. I don't know about you but anyone who mails books to kids who probably would never have access to them is a saint. In my book.
But it's more than that. I have a friend who owns a recording studio in Nashville and he's worked with Dolly some. One time when she was at the studio she asked him how he was doing and asked about his family. At that time, one of his daughters had been diagnosed with a usually terminal illness and he ended up telling Dolly about that. When he saw her years later, Dolly asked specifically about that daughter who, tragically, had died since they'd last talked. My friend told me that she was as sincerely empathetic and caring as anyone in the world could have been.
At one point in the podcast when the interviewer asked her about forgiving someone she said, "Forgiveness is everything!" And I have come away with the conviction that she truly believes that and truly lives her life in that light.
But she's no pushover. According to some websites, she's worth $500,000,000 but I don't begrudge her a penny of it. She's worked for every dollar she has and I'm sure that anyone who underestimated her business sense or her talent is sorry they did. Porter Wagoner was probably the first man to learn that lesson. And yet, when he was dying, she was there, holding his hand.
The thing that I took away from the podcast though, is how through her music and her theme park, Dollywood, she has expressed so much love and respect for her family and her home place. She's recreated the cabin she was born in and that she was raised in way up in the Smokey Mountains for Dollywood and she owns the real, actual cabin which has been restored and made livable where her family members gather to stay and celebrate events.
And yet...and yet- she's also spent her entire life getting away from that place, even as she's somehow never left. Even as the part of her life she spent there has informed everything she's ever done. She hasn't just physically gotten away from it, she's also gotten far, far away from the simplicity and poverty of it. I can't imagine a life busier and more productive and complex than her's. When asked where she lives now she said something like, "Oh, I live everywhere. I'm like Santa Claus. I can be in so many places at the same time."
And although she literally wrote the theme song for an entire movement and union of women workers (Nine to Five) she refuses utterly to get involved with politics or even give her opinion about anything having to do with them.
"Why should I?" she said. "I'm an entertainer."

Anyway, wow.
I'm glad I listened to the podcast. There aren't that many episodes and if you're looking for something that'll entertain you, perhaps make you cry, and will absolutely make you think, this one is a good choice.

So beyond that, I cut out Levon's dress and got the sewing started. It's odd to think of having my husband back at home. Nine days is a long time to be on my own and I fear that I've gotten lazy and selfish, rolling with my days doing whatever came to my mind and that I felt the urge to do, considering no one's needs but my own. But I do miss that man and it'll be very fine to have him back where he belongs which is next to me.
Maurice isn't the only one who'll be glad he's back.

And that's it. I'm going to go cook some chicken and greens and tomatoes, heat up some rice and peas. And I'll make a salad out of these delicate "microgreens." 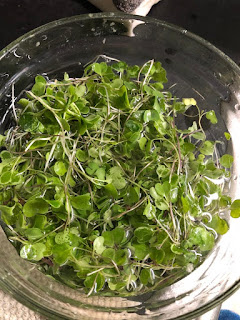 Another week is about to begin and we shall see how it goes.

I hope it goes well for all of you.