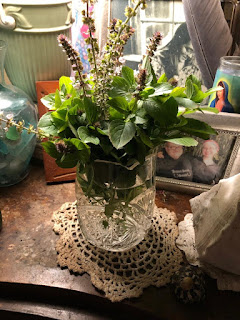 My African basil (I think that's the variety) is still going strong in the garden and its blooms have made an entire summer's worth of bees and wasps happy. They love the tiny orchid-looking flowers of the blossom. I picked some a few weeks ago and gave it to Jessie and I told her, "If you stick this in water, it'll probably root."
And it did.
So I decided to do the same and it makes such a pretty vase full of leaves and flowers, doesn't it?
And yeah, I should probably wash that doily.

It's been another flat, chilly, gray day and although I did force myself to go to town to the library and to Publix (the only green vegetable I had in the house was about five stalks of limp asparagus), that's really not much to brag about or discuss.
Mr. Moon will be getting on a plane tomorrow around noon and after what I'm sure will be a delightful 22 hours or so, he'll be arriving in Tallahassee at ten-something Monday morning.
I think I'd rather walk to Tallahassee but that's not an option for him or for, well, anyone who doesn't have a year or so in which to do it. So I guess compared to that, twenty-two hours of flights and airports isn't THAT bad.

I suppose I could write about my ex and I moving into the Jim Walters house. I'm not sure how we discovered it. Probably word-of-mouth which is how knowledge used to be transmitted before we all kept up on social media. There was a trend at that time for moving "back to the country" and we were all for it. Lots of our friends were trying to figure that out. I had one friend who, with her husband, had actually bought a few acres in the woods and they were living there in a sort of temporary house while they built their "real" house around that. I was enchanted by that house and by the fact that they were building it themselves with a lot of found materials that were being thrown away. I think they had electricity and running water but definitely not a bathroom at that point. And they had a baby with more to follow. They were sort of everyone's mentors in the hippie-land movement.
And side note- they still live there.
I haven't visited in years so I don't know what the house eventually morphed into but I'm sure it's pretty amazing. And I feel certain that they've had a bathroom for a long time now.

But I knew that my ex and I would never be able to accomplish anything like that. And even if we could, it sure wasn't going to happen any time soon. He was a guitar player, not a carpenter. And I didn't know one end of the hammer from another.
But we found this little house way out of town on the same road that Smitty's Club was on. I've written about Smitty's before. If you'd like to read one of those posts, you can find it HERE.
And I've written about this house before. It was green and white on the outside and the ex painted the inside before we moved in because our landlady, in a pique having something to do with either her ex or dead husband, had painted around the furniture and that really was just a bit too funky for me. She lived next door in a double-wide trailer which was a step up from the Jim Walter's house and her son lived across the street in a real brick house. It was an African American community and was considered to be way out in the boonies at that time. Honestly, there weren't many people living out there and hardly any of them were white people. Two doors over was Mabel's Club. Mabel was Smitty's sister and had her own little jook where there was a juke box and a kitchen where she cooked fried chicken sandwiches which she sold along with sodas and beer.
The house was very small. Two tiny bedrooms, a basic bathroom, a simple kitchen, a living room. I doubt the whole thing was six hundred square feet.
It was not an easy time for me. My boyfriend and Bill were getting some gigs and when they weren't playing they were rehearsing and I was working at a different restaurant by this time. I was only serving, not cooking or cashiering and it was a local place and even had a liquor license.
And a salad bar!
Jump back, Jack. High cotton.
Anyway, it was a very unsettled time.
The house had no heat or air conditioning and we lived there mostly during the summer. It was almost unbearable. Jim Walters hadn't discovered insulation when that house was built. But I tell you what there WAS- miles and miles of cow pasture behind the house.
Literally.
And you know what you can find in cow pastures?
Psilocybin mushrooms.
Now psilocybin was the first drug I'd ever done. This was in the last days of me living in Winter Haven and somehow, some way, my friends had discovered these trippy fungi and it was a big deal. I had resisted doing them and had not so much as smoked a joint, either. I'd only gotten buzzed a few times on Boone's Farm apple wine and was pretty darn pure when a friend of mine dosed my chili one day when I got off work from McDonald's (yes, I worked at McDonald's) and although I don't believe in doing that to someone, I am eternally grateful that he put those mushrooms in my chili.
I had the best afternoon of my life.
So mushrooms were something I was quite familiar with and we did so many mushrooms that summer that if they really were dangerous, I'd be dead.
I ain't dead.
It was truly one of the most instructive summers of my life. I learned so much about the Black community and came to respect my neighbors intensely. I learned so much. And for some reason we were accepted in that community. The closest store was at the far end of the road and it was run by a white family and they never would take my checks. Hippies were NOT acceptable people. But at the end of the road where we lived, it was live-and-let-live and I was offered nothing but kindness. Our landlady's son would often invite the ex and I over after he got off work for a drink. I didn't drink anything in those days but he kept his vodka in the freezer and I would accept his offer of a shot of that. He told me that he loved coming home and smelling what I was cooking.
"You cook like a black woman!" he told me. And I guess I mostly did. Beans and rice and greens and cornbread were our staples. We really didn't have much money. Sometimes we had none.
And sometimes we had roommates. The boy I moved to Tallahassee because of moved in for awhile with his girlfriend (now wife) and for a short time an old friend of the ex's lived with us and that's fodder for an entire novel. He planted a pot patch out a way behind the house in the cow pasture and everyone in the neighborhood knew about it but of course no one called the police. One morning though, we woke up and the owner of the field had bushhogged the whole pasture and there went the budding-up weed. Not to be completely defeated, our roommate went out and picked through the leavings for every scrap of his resinous crop he could find and put it all in paper bags as the whole neighborhood knew what was happening, shaking their heads and laughing.

I guess that what I mostly learned from living there was that while we, as hippies, were treated as second-class citizens out of the choices we'd made, our neighbors had been born into and were living in a system where they were second-class citizens because of their skin color. I understood this theoretically before I moved into that neighborhood but living there made it all very obviously real. I will be eternally grateful for that experience. And to be honest, all of the tripping I did was more beneficial to me than years of bad therapy would have been.

So. That's the story of my life on Bannerman Road which is now a totally upscale place with planned communities and lots of commerce and churches and restaurants and blah, blah, blah.

How we left it and where we moved to next is another story.
Perhaps I'll tell that one someday too.

Meanwhile, I'm thinking now about Ms. Mabel who I'm certain must be dead. I'm thinking about fried chicken sandwiches and finding mushrooms in cow shit and eating them right there, fresh out of the poop. I'm thinking of the bulldog we had whose name was Beck who would sit on a chair like a human to look out of the window at the goings-on of the neighborhood and I'm thinking of the pot-growing roommate who's been in jail for decades for crimes having nothing to do with growing reefer. I'm thinking of how I've lived so many different lives in so many different places. And how here I am now. Still alive, still grateful to live in a diverse community, even if it is a different one. Still cooking beans and greens (which I now grow myself) and cornbread.

Thinking that maybe I've distilled the best of what I've come to love in my life and am living that here in Lloyd.