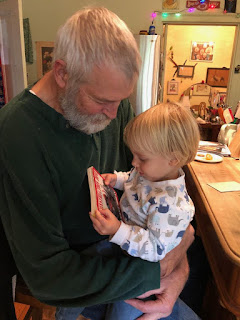 This morning right after Mr. Moon had called to let me know he'd arrived safely and would be home soon, I got a text from Jessie saying that she was going to take the boys out to the Jr. Museum. And then she said, "I was thinking about being cruel and surprising Dad with two sick boys. Hehe."
I replied, "I was thinking the same thing. Bring 'em out."
She was hesitant. She knew he was going to be exhausted but I told her that Dad would settle into his chair a lot quicker if August was sitting beside him watching TV.
And so she did. In fact, she got here before he did and so Mr. Moon got his first welcome home hug not from me but from his grandson August who sprinted on his long-and- getting-longer-everyday legs to be picked up Boppy.

And Boppy was exhausted but after he dragged everything into the house and went through the mail and ate a bowl of soup and some of the cheese toast I made for him and the boys, we all went outside. August wanted to see the garden. I told him that he'd have to look very carefully and close to see the carrots but when I showed him the row he said that no, he could see them fine. I said, "That's because you have great, young eyes."
"Yes," he said. "I do."
And he does.

We hung out in the gorgeous sunshine for awhile and let the boys get some ya-ya's out although really, they wanted to go watch TV mostly. But they did a few fun things. 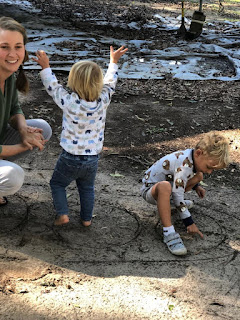 Jessie drew a rocket ship in the dirt and they blasted off and then they space walked. August put on his space suit and his helmet and went off to get closer to the sun and also to see some aliens. They also climbed on the tractor and on the trailer and then they climbed the mulberry tree. 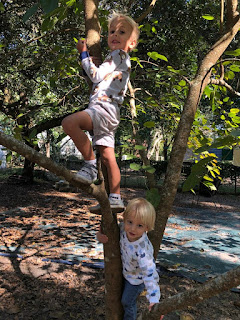 I can't believe that tree is big enough to for kids to climb. Seems like I only planted it a year or so ago. Or maybe last week.

Finally we went back in the house and August and Boppy snuggled up in the big chair and turned on the TV and Jessie made popcorn and every kernel was eaten. Boppy dozed and woke up to answer questions and Levon grew tired of watching and went and found the tricycle to ride in the hallway and before you know it, it was time for them to go. Levon had been awake almost the entire night and Jessie desperately wanted him to nap. Before they left I read a few books to August. He's in love with the Jolly Christmas Postman right now. I also gave an extremely dramatic reading of Marvin K. Mooney, Will You Please Go Now? and Levon found a book that I had no idea I owned called Construction Zone which pushed all of his happy buttons. It's a board book and there were all sorts of exotic earth-moving and road-building equipment in it and at the very end, there are thumbnail pictures of each of the machines with a small description of them. I was about to close the book but he saw those and said, "Keep reading!"
And so I did.
Then it was truly time to go and the boys wanted their going-away treats which they do not get until they're buckled into their car seats. Lately I've been giving them one or two of these delicious chocolate and coconut covered almonds I got from Costco and they like them. August asked me today if I would spoil him more and give him three.
Haha!
I told him not today and he was happy with two.
They kissed their Boppy good-bye and off they went, treaties consumed before they left the driveway, I'm sure.

And so everything is back to normal. I have a very large man in his den drinking a cup of Peach Passion tea, doing something on his computer with sports on the TV. I'm doing a little laundry which is mostly made up of camo and cold-weather clothing. His lunch bag is on the counter waiting for me to pack it. August asked him today if he was happy to be home.
"You know what, August?" he said. "It's so much fun to go away and do things but it's always wonderful when you get back home."
It's true. Unless, of course, where you went away to is Cozumel but that's an entirely different story and it's my story, not his.
August also told me today that he wished they lived next door to us. He pointed out where they could build a house, about a hundred yards from our house. He even pointed out that they'd have to cut down a tree first. He's a very sensible young man.
And Levon said, as we were walking up the steps to the kitchen that this was Boppy's house and Mer's house and Levon's house.
"This is your house?" I asked him.
"Yes," he said in his beautiful Levon voice.
"You're right," I told him. Whenever you want it, it is yours."
He already knew that though.
Mer and Bop's house is a home. The home you would want to come back to.
At least that's how I feel. And the man has come home.

I better go feed him.