I didn't get out of bed until 9:00 this morning and haven't done shit since then except to take a little trash and go by the post office. I'm just not feeling my best today and so what if I don't get anything done?
Having said this, I just texted Mr. Moon to ask if I should go get our groceries for our planned get-away to Dog Island today instead of tomorrow morning. Do I have the stamina to go BACK to Publix? Oh jeez.
Dog Island.
Mr. Moon's boat trailer has some broken springs and the parts won't be in to fix it for at least another week so we are to take the ferry which I don't think we've ever done together although maybe we have. I've taken the ferry when I used to go to the island by myself occasionally, before I suffered my first real episode of anxiety and having no idea what it was, thought that going to the island by myself would be a good way to shake whatever it was that was going on in my head and making me feel so fucking crazy which turned out to be the worst idea possible and let this be a lesson to us all- IF YOU THINK YOU MIGHT BE SUFFERING FROM ANXIETY, DO NOT GO TO A VIRTUALLY DESERTED ISLAND ALL BY YOURSELF TO TRY AND FIX THE PROBLEM!
No. Just don't.
However, Mr. Moon and I definitely need some down time, some away time, some there's-nothing-to-do-but-hang-out time and even if we take the ferry instead of the boat, which in theory will be an easier thing to do, we'll still need all of our groceries and water and booze and books and whatever else we need over there. We'll just be loading them onto someone else's boat instead of our own.

So. Mr. Moon just texted me back that we'll probably have plenty of time to do the shopping on the way down because the ferry won't be leaving until 3:00 and this is true but I'll stress out about it anyway because that's what I do. And shopping with my husband can be, um, FUCKING NERVE-RACKING because he doesn't spend much time in the grocery store and seems to want to look at the price per ounce of every single product we might need which takes awhile. As in, eons. As in, entire species have the time to evolve and then go extinct and their bones transformed into petro-chemicals.

But. You know. I had a small epiphany last night or maybe it was a few days ago- who can keep track of these things? and it was about how I always stress out about shit and somehow it all works out, every single time, although not always in a very good way (see above) but in some way and wait. Now that I think about it, I've had plenty of really, really bad times on Dog Island but to be honest, none of them had one thing to do with running out of food, water or booze.
So there is that.
Here's a picture someone posted today on FB of a double rainbow on Dog Island. 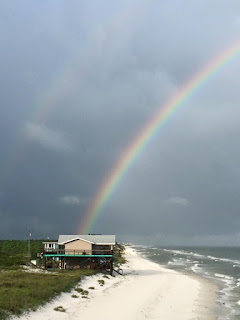 Maybe a nice omen? Of course, that's not our house. Not even close. Not even in the proximity sense except that they're both on the same small island.

Still and all, after all of these years, Dog Island is not a bad place to be and I've had some wonderful times there and hopefully, will again this very weekend.

Hey! I finally watched some of the Olympics last night. I saw Simone Biles win her fourth gold-medal and I have to say that watching the Olympics makes me feel oddly uncomfortable and I think it has to do with what the athletes' bodies look like which is, to be blunt, NOT QUITE HUMAN. Also, it all makes me uncomfortable because these people who have worked so hard and sacrificed so much are supposed to be representing an entire country which just doesn't seem fair. I mean, I haven't gotten up early one morning of my life to go learn a gymnastic routine and so why should I get any of the glory just because Ms. Biles was born in the same country I was born in?
Know what I mean?

Yeah. I probably think too much.

Now I think I'm going to go clean the poop out of the chicken house. FOR TEAM AMERICA!
Not really. For team Mick, Trixie, Chi-Chi, Cha-Cha, Butterscotch, Camellia, Dearie, Blossom, and Otis.
To be specific.

Team Maurice is sitting on the table watching the leaves move on the trees. I guess that's what she's watching. 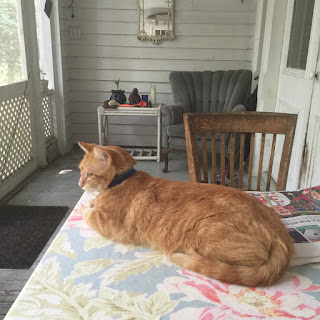