Making It Up As I Go 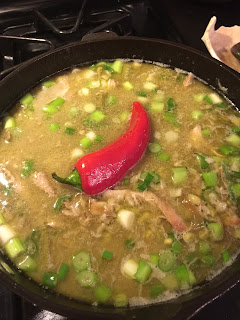 In the beautiful cookbook that Rebecca sent me, there is a recipe for Jamaican pigeon peas and rice with coconut milk and spices which is baked, which I have wanted to make since the book, upon arrival, fell open just there, on that page.
Now. As you know, I rarely follow recipes. And yet, I have complete disdain for those online recipes where, in the comment sections people say things like, "I made this and my family didn't really like it. Instead of whole milk, I used soy milk and instead of celery, I used zucchini and instead of tomatoes (my son is allergic to tomatoes) I used eggplant and instead of dried mustard I used paprika. Other than that, I made the dish exactly as written. I won't be making it again."

I mean, really. What's the point there?
But I am not stupid and I know that if you stray too far from a recipe and it doesn't taste very good, it's not the fault of the recipe.

And so what have I done here?
Well, instead of pigeon peas, I have used some of our zipper cream peas from the garden. I have also added leftover chicken. I've used some brown rice instead of white, although there is a bit of leftover jasmine rice in there too.
Beyond that, I have mostly stuck to the recipe as to spices and the coconut milk and the process of making the dish which is a bit fussy in that it has to cooked on the stove and then baked and so forth.
I have absolutely no illusions (or is it delusions?) that my dish is not going to be the same as the dish presented in the cookbook but I think it will be good, nonetheless.
I'll let you know.
I am making another recipe from the book for goat-cheese stuffed tomatoes with herbs and that will be pretty darn close to what is given as instructed and YES! I am using cheese but not as much as recommended and for my lunch I had a big bowl of curried vegetables and for my snack I had a small organic apple and one of those extremely dense flatbread things spread with a tiny bit of hummus.

Instead of a Cuban sandwich.

So. Changes are being made and I have been feeling good and have been going at it strong all day. Lily ended up bringing Magnolia and Gibson here because her power went out and so they got to have a little play time at Mer's. 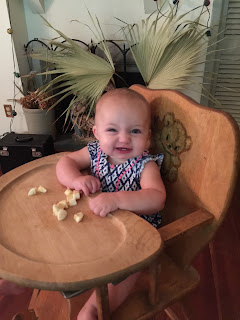 And lunch time, too. Will you look at that child? She smiles like that all of the time. I know I keep saying this but never in my life have I met such a happy baby. I had wondered what it would be like to have a granddaughter and in truth, I feel a certain familiarity with her, an unearned closeness which is nothing short of a delight. After I had picked up Owen at the bus stop and taken them home and gave them over to their father, Maggie reached out to me from her father's arms to take her again and it was so sweet.
She's a peach, that one. A real peach. 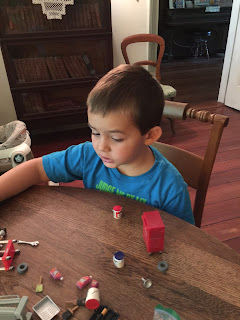 Here's Gibson, playing with some toys, waiting for his lunch. I had a good time with him too. We played the matching game and I won and he was NOT happy but he dealt with it. He rolls with life, that boy.
And it was good to see Owen although we really didn't have much time to talk before their papa got home and I took off to go to Publix and the library and then get home and get the clothes off the line and clean up the kitchen and put away the toys and make the supper.

I think I will sleep well tonight and it's been a very good day and I have two new Elizabeth Strout books to read and I eavesdropped on little girls doing their homework in the library with perhaps their grandmother and my pharmacy called to tell me that my bio-identical hormones are ready for pick-up tomorrow and the girl leaving the message called me "Miss Mary" which she always does and that charmed me and I have had four good walks this week and have not died and am in a decent mood.

Time to go chop parsley and onions and stuff some tomatoes.